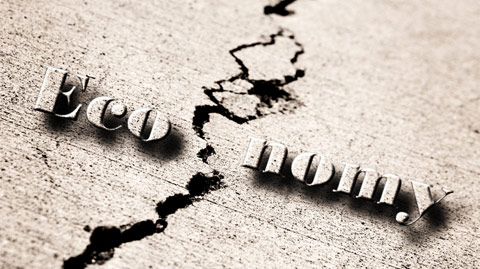 Stock markets across the world are starting to crack. Last night Europe was heavily in the red with drops in excess of 3% in some market exchanges. And, as soon as the bell rang this morning on the East Coast, U.S. stocks continued the global decline.

Though the Federal Reserve released a report today indicating that the U.S. economy was on pace to grow moderately, investors were having none of it. After topping 17,000 for all time highs just a few weeks ago, stocks have tumbled over 1,000 points through today.

Daniel Ameduri of Future Money Trends alerted subscribers several months ago to brace for a correction of at least 10% this fall, and perhaps even worse. That prediction, echoed by many contrarian financial analysts and economists, is now coming to pass.

The rally since 2009 was stunning considering the fundamentals.

The meltdown will be shocking.

There is panic on Wall Street. And while very few people are talking about, it is very likely that what’s fueling the sell-off is a global panic surrounding the possibility of a widespread Ebola congtagion.

With Americans growing increasingly concerned about the government’s inability to control the spread of the deadly disease in the lead up to the holiday shopping season, global investors may see the writing on the wall. If Ebola cannot be contained, then people will likely opt to stay home this year instead of joining massive crowds in closed quarters during key shopping days like Black Friday.

Fundamentally, the U.S. is in trouble as noted by these 12 charts which show the permanent damage that has been done to the U.S. economy. As well, numerous ominous signals began flashing warning signs in recent weeks. Many of them had not be seen since prior to the crash of 2008.

Now, without any clearly defined plan or protocols to control the Ebola contagion, the Obama Administration may have just triggered the next big crash.

According to Ameduri, if the market breaks under the technical levels in the area of 15,00o points on the Dow Jones, we could be in for a serious crash.

Stock traders and computer trading algorithms closely follow technical movements of stocks. The automatic trading systems, specifically, depend on benchmarks and “stops” to determine when to buy or sell. In May of 2010 stocks dropped nearly 1,000 points within a few hours after automatic trading systems initiated a massive sell-off as technical barriers were broken because of what the government eventually claimed was a “fat finger” trading mistake by a single individual.

While it’s impossible to predict if we are nearing a breaking point in financial markets, investors around the world are obviously concerned. The precipitous drop in stocks over the last few weeks will no doubt lead to massive inflows of capital from the government’s secretive Plunge Protection Team in an effort to stabilize stocks.

But, as we saw in 2008, even efforts involving hundreds of billions of dollars are sometimes not enough.

Ameduri, who has produced scores of informative documentaries about the financial crisis, has told his clients to keep a close eye on the Dow Jones and to prepare for the worst.

“If it drops below 15,000 points I would suggest people start buying food and ammo, because this depression is about to turn nasty.”

Are we on the cusp of the next great crash? Or will President Obama and his Working Group on Financial Markets be able to defend financial markets?

Video: Financial Analyst: “We Are Very, Very Close To A Major Event Here”