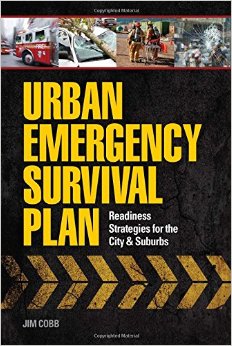 When most people think about preppers, they envision a family that lives in a remote area, growing their own food, raising livestock, and sitting around a cozy fire at night. However warm and lovely that image may be, the reality of the situation is that most people do not live on 200 acres in the middle of nowhere. The population of the United States is concentrated in urban and suburban areas.

Of course, when you live in a condo or a suburban home on a tiny lot, your preparedness situation may look a whole lot different than that of someone who as strategically relocated to the country. This means that you may have less storage space, a decreased ability to raise your own food, and an entirely different host of threats than your country prepper cousins.

The standard issue advice for city dwellers is, “Move.” But we all know that’s easier said than done, In an economy like this, if you’re lucky enough to have a good job, picking up and moving to the boondocks may not be in the best interests of your family. Speaking of family, you may have again relatives that you care for. Your children may be at a crucial point in their eduction. Moving costs a lot of money…the list goes on and on of why “move” is careless advice from people who just haven’t thought things through. Bestselling preparedness author Jim Cobb’s new book focuses on preparedness for the city dweller.

Bestselling preparedness author Jim Cobb has written a new book that focuses on preparedness for those in urban areas. You don’t have to live in downtown Manhattan to benefit from it, though. Many of us have neighbors and live on a public roadway, and if you fall into those categories, you will find practical, relatable advice in Cobb’s book, Urban Emergency Survival Plan: Readiness Strategies for the City and Suburbs.

The book contains vital information such as the following:

Packing lists for get-home bags, everyday carry items for adults and kids and bug-out bags
An overview of threats that face an urban area and instructions for planning safe travel during and after disasters, as well as how to plan a temporary escape
Instructions for sheltering in place at work
Chapters on food storage and water procurement in urban areas with emphasis on limited space and budget
A detailed chapter on security options in urban areas
A detailed chapter on sanitation, first aid and shelter
Ideas for how to respond and cooperate with government disaster plans
Photos of important survival gear

Jim has been nice enough to provide a sneak peek into the book.

We all know that even in a big house, it can be hard to find a place for all of your stockpile. But what if you live in a condo or apartment? Read on for Jim’s advice on the topic!
An Excerpt from Urban Emergency Survival Plan

Where do I store all this stuff?

One of the difficulties with food storage in an urban or suburban home is your space may be severely limited. While nobody has truly unlimited storage room, no matter where they live, if you’re in an apartment or condo, you just aren’t going to have as much room as someone who has a full basement under their home.

Fortunately, there are several places in even the smallest apartment where you can squirrel away goodies for a rainy day, without turning your pad into something that looks like it should be featured on Hoarders.
Under the bed

The average can of soup or beans is about 3″ across. A queen-sized bed is 60″ x 80″, not counting the frame and headboard. A bit of fifth-grade level math tells us that you could fit roughly 500 cans of food under the bed. Of course, that will go down a little bit depending on how you store the cans, such as using a plastic tray or cardboard boxes. Even so, that’s a ton of food in a pretty small space. Depending on how high your bed sits off the floor, you might even be able to double-stack the cans. Risers, found at most big box retailers, raise the bed higher, allowing for more storage space underneath.

Granted, it isn’t the best idea to have the entire floor under your bed covered in canned food, if only because of the difficulty of reaching and rotating it all. However, let’s say you have one queen-sized bed and two double beds in your condo. You could put 300 cans of food under the queen bed and 150 under each of the doubles. That still gives you 600 cans of food!
Closets

Even the smallest of living spaces usually has at least one or two closets. Start by ditching the stuff in those closets that you really will never use again. The shoes that went out of style years ago would be a good start. Then, use the back wall of the closet for food storage. You could build shelves or install a pre-fabricated storage system. Really though, just stacking a few cases of canned goods on the floor will work fairly well.
Basements

Many apartment buildings allow tenants a small amount of storage space in the basement. Often, it isn’t a lot of space and it isn’t all that secure. But, even so, this is space you can use for food storage. What you might consider doing though is concealing the food from prying eyes. Rather than have your storage unit filled with cases that say Campbell’s Soup on the sides, repackage the cans in a box on which you’ve written something like, “Grandma’s shoes.”

If you go this route, be sure to keep the boxes up off the floor. Basements are, of course, notorious for having damp floors.
Hidden in Plain Sight

A large Rubbermaid tub, filled with food or supplies, then covered with a table cloth or fabric makes a nice coffee table, believe it or not. You can do the same with a taller box or a few smaller boxes stacked together and call it and end stand. Get creative.

Don’t let your geographic location or that of a loved one get in the way of being prepared. Check out Urban Emergency Survival Plan today!
About Jim Cobb: .  Jim has been actively involved in prepping and survival planning for about thirty years.  In addition, he is a licensed private detective and has worked in the investigative field for about two decades.  Jim lives in the upper Midwest with his lovely wife and their three adolescent weapons of mass destruction.