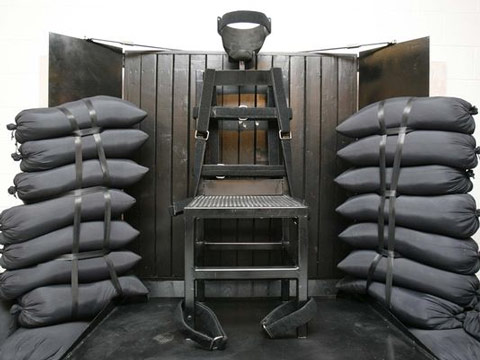 Utah has become the first State to allow the execution of death row inmates by firing squad.

Governor Gary Herbert signed the new law after a close battle that ended in a 39-34 vote in the State’s House of Representatives. The law gives the governor the power to call for an execution by firing squad if hard-to-get drugs for lethal injection are unavailable.

Utah, however, doesn’t intend to let death row inmates get away with murder:

The police force that guards the desert state of Utah will soon ask for volunteers from among its members for a particularly macabre duty.

Five-man firing squads are to be formed and trained in preparation for a move that critics say risks dragging America back to a ‘more barbaric past’.

Facing a crisis in the lethal injection system by which most Death Row inmates are normally executed, Utah’s leaders have just approved a solution that harks back to the violent spirit of its Wild West past.

The state has become the first to bring back the firing squad. Gary Herbert, Utah’s Republican governor, conceded that he found the concept ‘a little bit gruesome’, but stressed that it would be used only if injection drugs are not available 30 days before a scheduled execution.

Yet such a scenario looks increasingly likely. Thirty-two states still have the death penalty, and America’s Death Rows are clogged with more than 3,000 condemned prisoners because of a string of botched lethal injections. These have allowed lawyers to halt the scheduling of supposedly painless executions on the grounds that they breach a constitutional ban on ‘cruel and unusual’ punishment.

To make matters worse, supplies of the sedatives used are drying up. Many of the most effective drugs are made only in Europe, but the EU has told manufacturers they cannot sell them if they are to be used for lethal injections.

U.S. drug manufacturers have already stopped making them, worried about being associated with executions as a growing proportion of Americans come out against the death penalty.

Utah just sent a message to murderers: If you kill someone, you’re going to be executed one way or the other.

There are those who claim that a firing squad is cruel and unusual punishment, but they are often the same people who claim that lethal injection and the concept of the death penalty are also cruel. Of course, they often fail to bring up the cruelty of the crime that led to the conviction to begin with.

Bill sponsor Paul Ray, a republican, disagrees with those who call it cruel. “A team of trained marksmen is faster and more humane than the drawn-out deaths that have occurred in botched lethal injections,” he argues.

A report from the Associated Press explains how the firing squad works:

The prisoner is seated in a chair that is set up in front of a wood panel and in between stacked sandbags that keep the bullets from ricocheting around the room.

A target is pinned over the inmate’s heart. Shooters aim for the chest rather than the head because it’s a bigger target and usually allows for a faster death, said Utah Rep. Paul Ray, who sponsored the proposal.

The prisoner is offered a two-minute window to offer final words.

Five shooters set up about 25 feet from the chair, with their .30-caliber Winchester rifles pointing through slots in a wall. Assuming they hit their target, the heart ruptures and the prisoner dies quickly from blood loss. What do you think? Cruel and unusual punishment? Or is this method of execution just as humane as lethal injection?

Federal Reserve Insider Alan Greenspan Warns: There Will Be a “Significant Market Event… Something Big Is Going To Happen”