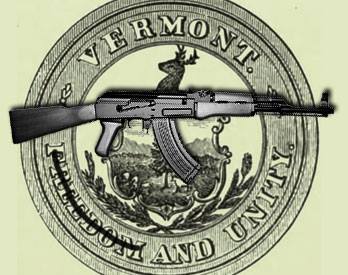 After Sandy Hook, we saw Connecticut, New York, Colorado, Washington state and others pass gun control legislation. Connecticut, in the fog of the school shootings and media-driven mass hysteria, passed the strictest laws in the entire nation.

Now, neighboring Vermont is pushing for more gun control, too.

But legislators from the state are scratching their heads as to why.

It seems that Vermont has one of the best safety rating in the country for guns. In short, it doesn’t have a gun problem.

Representative Patrick Brennan of Colchester wondered Tuesday, “Is this a solution in search of a problem? We don’t seem to have a problem.”

With legislators debating whether to propose new gun legislation — Brennan says he can point to several stats to tell describe why that’s not necessary.

“Vermont is actually rated first in the nation in gun safety,” Brennan said.

Add in the fact that he says violent crime has fallen each of the past three years, and Brennan says gun legislation just is not warranted.

“We’re doing fine,” Brennan said. “We’re actually better off now than we were in the past.”

Police chiefs were asked about the need for the measure as well. James Baker, the police chief of Rutland City, which has about 16,000 people, was dismissive:

A pro-2nd Amendment lobbyist for the Vermont Federation of Sportsmen’s Clubs, Even Hughes, also made the case for why this makes no sense:

“Vermont continuously is one of the very lowest crime rate states in the nation. We have one of the best states on gun safety… we just see this moving legislation agenda addressing a problem that doesn’t exist. It’s actually a solution in search of a problem.”

So why is there a push for more gun control?

Clearly there is more to the agenda, with billionaires backing nationwide advocacy groups and the Obama administration and other influential liberals dead set on destroying gun rights.

Specifically, this initiative centers around pushing states like Vermont to report more data to the feds, and use mental health screening to expand the number of people prevented from buying guns, including in person-to-person transfers and sales.

As in other states where gun control groups seek the proverbial camel’s nose-under-the-tent, Bloomberg’s groups have found Vermont’s perceived weak spot. The tiny state does not have prolific gun violence, but it does, according to Everytown for Gun Safety, lack in reporting gun owners classified as mentally ill (a category sure to expand until it bloats):

According to the group’s Closing the Gaps report, Vermont ranks among the “worst performing states” for its unwillingness to place Vermonters with mental health challenges in the FBI-run National Instant Criminal Background Check System. The NICS was launched in 1998 to keep guns out of the hands of criminals.

Along with New Hampshire, Massachusetts, Rhode Island and a handful of other states, Vermont has refused to stigmatize the mentally ill or deny them their constitutional rights. According to Everytown, these “worst performers” have reported fewer than 100 people to the NICS. While the number of mental patients reported to NICS nationally stands at 3.7 million — up from 1.1 million in 2011 — Vermont has informed on just 23 people with mental illness.

So Vermont doesn’t report enough data on its citizens to the feds.

The post-Sandy Hook era of gun control has focused on “snitch style” reporting and increasing “background checks” and dense regulations so that gun ownership – despite being an inalienable right – is burdened with reporting red tape that contributed towards a very slippery exclusion list:

State Sen. Jeanette White, a Democrat, expressed concern about the point of no return for those put on no buy lists:

“I’m not going to blanket say everybody who has had a mental health issue where they threatened to harm themselves or others would automatically be denied the right to have a firearm. I’m not there.”

Connecticut and California Heading Into INSURRECTION over Illegal Aliens; U.S May have to Send Federal Troops to Remove Legislatures