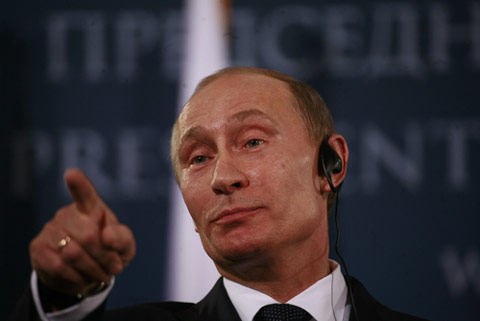 When the leadership of North Korea or Iran suggests a nuclear attack against the United States the threat is usually dismissed as mere posturing by extremist regimes.

But when the President of a global military super power like Russia makes such a threat, then perhaps it’s time to start paying attention.

In an interview with Serbia’s Politika newspaper Vladimir Putin did not mince words about his feelings surrounding the recent sanctions against his country’s economy and monetary system. He believes the actions of Europe and the United States to be hostile acts and he warns that Russia is prepared to go all the way if the hostilities continue.

It’s futile for the U.S. and its allies to “blackmail” Russia over the Ukraine crisis, President Vladimir Putin said in a newspaper interview today.

He accused Barack Obama of adopting a “hostile” approach in naming Russia as a threat to the world in the U.S. president’s speech to the United Nations General Assembly on Sept. 24.

“We hope that our partners will realize the futility of attempts to blackmail Russia and remember what consequences discord between major nuclear powers could bring for strategic stability,” Putin told Serbia’s Politika newspaper on the eve of his visit to the Balkan nation today.

Putin said that Obama had identified Russian aggression in Europe as one of the three “major threats facing humanity,” alongside the Ebola virus and Islamic State.

“Together with the sanctions against entire sectors of our economy, this approach can be called nothing but hostile,” Putin said.

Attempts to pressure Russia with “unilateral and illegitimate restrictive measures” will impede efforts to settle the crisis, he said.

“How can we talk about de-escalation in Ukraine while the decisions on new sanctions are introduced almost simultaneously with the agreements on the peace process?” he said. “If the main goal is to isolate our country, it’s an absurd and illusory goal.”

If he didn’t have several thousand nukes ready to deploy at the push of a button we might ignore him. But this is the President of Russia, and unlike some Western leaders who talk a big game, we are fairly certain that Putin is prepared to stand by his rhetoric.

He has just deployed nuclear weapons systems into Crimea, so you can forget about that territory ever going back to the Ukrainians. Thus, the question is how far are President Obama and our European allies willing to go? And what exactly is the intention of the sanctions? If it’s to make Russia give Crimea back, then someone is living in a dream world. If it’s to punish Russia, then we can see based on Putin’s most recent comments what the end game of that strategy will eventually lead to.

In his documentary Strategic Relocation well known survival expert Joel Skousen discusses the real possibility of a nuclear war between Russia and the United States. He, like many others, see the writing on the wall. We didn’t build all these nuclear weapons just to sit there and look at them. And, as should be obvious, the East and West have completely different ideologies and visions for what the world is supposed to look like. Both sides are actively working to minimize or destroy the influence of the other.

It’s machinations like these that have led to great wars throughout human history.

It took decades of buildups, standoffs, posturing and threats before a bullet from the gun of Gavrilo Princip eventually triggered an unprecedented death spiral in the summer of 1914. Today, one hundred years later, the chess game remains in full swing and it should be clear that it is only a matter of time before the next Princip event triggers a global apocalypse on a scale that most can’t even imagine.

Of course, we could be totally overreacting. Vladimir Putin threatening a nuclear destabilization is probably just all bark and no bite.