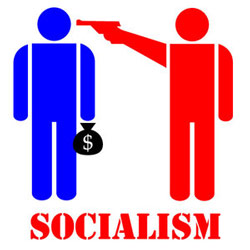 Former British Prime Minister Margaret Thatcher once famously said that the problem with socialism is that you eventually run out of other people’s money. As of this writing our national debt is over $18 trillion and our unfunded long-term liabilities have been estimated to be as high as $200 trillion. Yet, despite this massive and unsustainable borrowing many Americans have been convinced that the party will continue for decades to come. And in the off chance our nation is ever faced with financial or economic crisis, our benevolent government will step in to save them – just like they did in 2008.

What most don’t realize, as highlighted in a new micro-documentary from Future Money Trends, is that it is the very government they have entrusted with their livelihoods and those of their children that is responsible for the disaster in the first place.

Americans for the most part suffer from Stockholm Syndrome, a medical diagnosis where the victim identifies with his or her attacker, even seeing reduced abuse as an act of kindness… Take, for example, Americans who got bailed out of their mortgage in 2009… At the core of the housing crisis is government. So the Americans who look to the government to save them and even gleefully thank the government for helping bail them out fail to realize it was the government who f%*ked them in the first place…

The reality is we know who the enemy is. They have given us a corrupted society where our children graduate as trained assembly line cubicle employees to the oligarchs in power.

The day of reckoning is upon us because debt financed socialism and corporatism isn’t working. It’s time for all thinking minds to opt out of the system.

Eventually, as Margaret Thatcher warned, the money will run out, the consequences of which will be a global collapse of such immense proportions that it will be written about for centuries to come.

It’s time to government-proof your life.