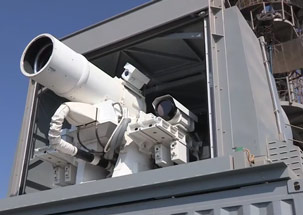 Over the last several weeks we have witnessed a complete collapse of the Russian economy, stock markets and monetary system. It is a result of Western sanctions for Russia’s refusal to retreat from its newly annexed territory of Crimea. And though Russia has pounded its chest with military protrusions into Western airspace, including the west coast of the United States, there is a distinct reason for why Vladimir Putin can’t pull the trigger on any sort of military engagement, at least not yet.

In his Strategic Relocation documentary World Affairs analyst Joel Skousen suggested that, while a World War III scenario is an event that is likely to take place in the foreseeable future, Russia and China are hesitant about any sort of military conflict with the United States because of the West’s top secret, advanced military technologies.

One such technology that’s not so secret any more but was recently released to the public is the LaWS (Laser Weapon System). It’s a system so advanced that the military says it can lock on to and engage targets with near-instantaneous lethality.

“Laser weapons are powerful, affordable and will play a vital role in the future of naval combat operations,” Rear Adm. Matthew L. Klunder, chief of naval research, said in a statement Wednesday. “We ran this particular weapon, a prototype, through some extremely tough paces, and it locked on and destroyed the targets we designated with near-instantaneous lethality.” (Yahoo)

As you’ll see in the video below, the system is capable of tracking moving targets, including aircraft, and literally blowing them out of the sky at the speed of light.

Granted, both Russia and China are familiar with this particular technology, the U.S. has spent trillions of dollars on military research over the last two decades. What’s most curious is that not only do the Russians and Chinese not know what all this money was spent on, but neither do 99.999% of Americans, as evidenced by a Congressional hearing held on September 10th, 2001.

Yes, Defense Secretary Donald Rumsfeld gave that statement just one day before the terrorist attacks of 2001, and according to some researchers the accounting records for that $2.3 trillion were destroyed when the Pentagon was hit (officially, of course, Rumsfeld misspoke and the missing money was the result of an accounting error of some sort).

We can be fairly certain that Putin is well aware of these massive military investments, and as Joel Skousen suggested, the Russians (and Chinese) have no idea what kind of technology we may have cooked up with that kind of money.

The Laser Weapon Systems mentioned above are just the tip of the iceberg and the video was obviously released as a propaganda tool in response to Russia’s own propaganda that included airspace incursions and threats of nuclear war. But the United States, despite its shortcomings, still has the most advanced military systems in the world.

In fact, just a couple of weeks ago, after the Russians had poked and prodded the west with veiled threats of war, residents in London and New York reported hearing loud booms and/or rumblings in the middle of the night. No official story for this has been released, but some researchers suggest the mysterious sounds were the work of the top secret supersonic Aurora project, which is capable of traveling at over six times the speed of sound. The fact that people on both sides of the U.S. military’s Atlantic testing areas heard the sounds suggests that it could have been Aurora, and that it was yet another show of military force to warn Russia that, despite their economic malaise, they have no possibility of winning a military engagement.

The Russians and the Chinese probably know this and this is why both countries are spending more money on military technology than anything else. That and they are hacking U.S. military networks and military industrial complex servers in an effort to steal as much information as they can to fast track their own military programs.

Overall, the U.S. is hemorrhaging economic espionage to the tune of $250 billion.

“This is a national, long-term strategic threat to the United States of America.”

War is coming to the world. Russia will not stand idly by as their entire way of life is destroyed through economic means. But they are not ready for a widespread conflagration right now.

It is then that we will see what Uncle Sam has been up twenty floors below the surface at remote military installations like Area 51.

The Prepper’s Blueprint: Prepare For Any Disaster