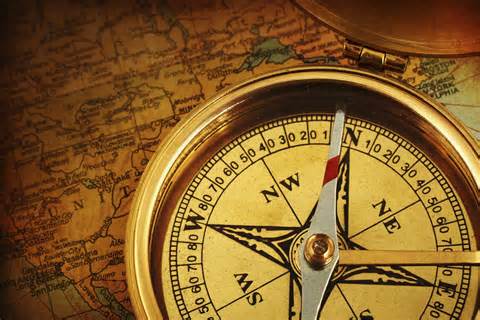 Call me old fashioned.  Call me a Luddite.  But don’t call me lost, because I know how to read a map and compass.  When I served my country years ago they decided that a fine young Marine like myself should know how to read a map and compass, so that if I went behind enemy lines I wouldn’t get lost.  Later on I worked in an FDC (Fire Direction Center) where compass work was my lifeblood.  I learned how to plot azimuths, intersections and resections and other interesting and arcane land navigation secrets.  They showed us how to convert a grid azimuth to a magnetic azimuth and vice versa.

Don’t know what that means?  Keep reading.  Why go through all the trouble of learning this when there’s a GPS on every smart phone and in every pack these days.  The compass is outdated right?  Wrong.

The first thing you need to know about using a map and compass is that there’s a lot to learn and some of it can be tricky.  Another thing you’ll need to understand is the pace count, which I’ll discuss in a bit.  When you use a map and compass you do it for one of several different reasons.  You need to move from point A to point B accurately and efficiently, or you’re not quite sure where you are, but if you look at the map long enough you should be able to pick out where you are using terrain association.  You might want to plot a course over unfamiliar terrain and the map is a perfect place to do that.

A few years ago I went hiking with a friend of mind over unfamiliar terrain.  We crossed over at least three mountain peaks during our hike and he was guiding us using his newly won GPS unit.  (He won it a conference in Boston.)  He was holding it up as the shining light of land nav and I was suitably impressed.  We got to our destination and after awhile I asked him to reprogram it to take us home.  He said, “Huh?”  He had no idea how to operate it!  He’d made a few waypoints, but really had no idea how to use it.

Luckily I had brought my map and compass (you’ll find me in the woods naked before you see me without a map and compass) and I was able to plot a course to get home.  But what really got me was that he no idea how to read a map and compass either.  He was completely lost!  I could sort of understand how he might have got caught up in the excitement of new technology, but going out into the wilderness like that without the basic understanding of how to navigate was unforgivable.  That’s how people get lost and sometimes get dead.

Once you have a fundamental idea of how land navigation really works then the move sophisticated tools like the GPS you use are great and might help improve accuracy, but you won’t really need them in order to get where you’re going.

Having a basic understanding of how to shoot an azimuth (direction) and read a map could save your life some day.  Knowing how to use these two items together plus knowing your pace count is critical.

The pace count is a rough way of measuring distance when you’re walking.  The way I figured out my pace count was taught to me in basic training.  They took us to a 100 meter course (the military does all Land Nav in the metric system) and made us walk it about ten times.  We walked it at a normal pace without hurrying and counted every time our left foot struck the deck.  My pace count is 63 steps, so every time I count 63 (or 73 in rougher terrain) I reach up and pull down one of my Ranger Beads to keep track of my pace.

After all this talk of the map and compass you probably think that I hate the GPS.  Nothing could be further from the truth.  I’ve

pulled out my smartphone on many occasions and checked it for my location, which can sometimes be useful and sometimes not, but it’s a fantastic piece of gear to have.  When hunting I’ve used it see how far that swamp extends, or when hiking to see what’s over the next peak without actually having to hike up there and look.

In the city they can’t be beat.  “Turn left.  Turn right.  Bear left at the next intersection.”  Beautiful stuff!  Especially if you don’t know the city.  I used my smartphone with Google maps today in Bangor and it saved me a ton of trouble.

But with the good comes the bad and one of the things that bothers me about the GPS is that it’s electronic and thus dependent on electricity.  I’ve been in the field enough to know that batteries wear down and you don’t always get an immediate resupply.  Imagine life after a solar flare or an EMP attack or whatever might bring the grid down.  If you’re depending on your electronic gizmo to get you to your bug-out location you might find yourself in a dire situation.

The GPS is awesome when it works, but it’s sometimes been my luck that just when I need some electronic device the most, is exactly when it will fail.  Case in point – I was once hiking through the 100 Mile Wilderness in Maine and broke my ankle 40 miles in.  Could I get my cell phone to work.  Hell no!  Another time I was trying to login to my bank account in Canada to transfer funds while trying to pay for a room in the hotel lobby.  Could I connect to my bank?  Hell no!

My suggestion would be to trust your equipment as far as you can, but have a manual backup for it just in case.  That way when Murphy rears his ugly head you’ll have a backup plan and won’t wind up lost in the middle of a big forest somewhere with annoyed rescue workers trying to find you.

Sound off below!
–Jarhead Survivor

This Couple Lives Year Round In Their Off Grid Yurt