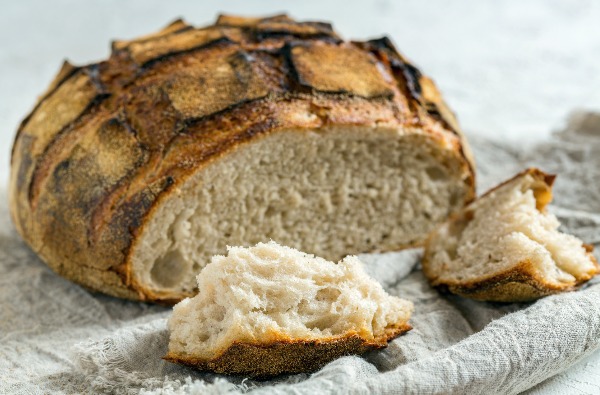 Sourdough bread is often known as the healthiest bread, and there’s a science behind that moniker. Although bread is a staple, many have trouble digesting it and it could be one of the worst things to eat if a person has a gluten intolerance. But sourdough bread could be the solution and a naturally healthy one at that!

So what exactly makes sourdough bread so much healthier and better for digestion than commercially made bread?

Part of the reason that sourdough bread is so healthy is the reduced phytic acid in sourdough bread thanks to the different fermentation process. Phytic acid is actually so hard on the body, it is considered an “anti-nutrient” by some. Phytic acid is a component found in the bran portion of all grains and beans.  It impairs the absorption of iron, zinc, and calcium because the phytic acid molecules bind with the minerals, which make these important nutrients unavailable to the body for use. Sourdough fermentation is much more efficient than yeast fermentation in reducing the phytate content in whole wheat bread (-62 and -38%, respectively).

The lactic acid bacteria present in sourdough enhances acidification, which leads to increased magnesium and phosphorus solubility. Long slow fermentation of wheat can reduce phytates by up to 90%! Some recent studies have even indicated that those who are intolerant to wheat are able to tolerate sourdough bread because the old-fashioned fermentation process has been shown to break down the gluten in the wheat in the process.

*We still suggest steering clear of ALL bread including sourdough if you have Celiac or a major intolerance to gluten; unless the bread has been made with gluten-free ingredients. Better safe than sorry. We have included a gluten-free flour option in the sourdough bread recipe in this article for our friends who do live a gluten-free life!

Sourdough bread won’t spike your blood sugar either. Sourdough bread is rated lower in the Glycemic Index (a system that ranks food based on its effect on blood sugar levels) than other types of bread because of the build-up of organic acids. These naturally occurring acids make the minerals and vitamins in flour more available than they might be in other bread, and reduce the rate at which glucose is released into the bloodstream. Despite its significant carbohydrate content, which is usually an indication of a high glycemic index food, sourdough bread has a glycemic index of only 53. This makes it a low-glycemic-index food. As with other low GI food, sourdough bread will likely cause only a gradual increase in blood sugar levels rather than a spike.

There are also probiotics in sourdough bread that make it a better choice than the commercially processed bread at the store. Probiotics help to support the gut microbiome. Probiotics are the gut bacteria that aid the body in healthy digestion. While gut health can help balance your mood, stress levels, hormones, and some of the other somewhat invisible aspects of your health, it’s often misunderstood as being an agent for weight loss or dieting. Gut health is really just assistance for your digestive system. However, the mass-produced sourdough sliced in a popularly branded loaf is likely lacking when it comes to any real probiotic benefit. So that’s why you will want to make your own!

All you need to make your sourdough starter is flour, water, and a container large enough to hold 2 quarts to keep it in.

Your sourdough starter looks like this when it’s ready:

The flavor of homemade sourdough bread is incredible and you will still be making a large batch of dough and storing it for up to a week, so you will do the work on one day for many loaves.