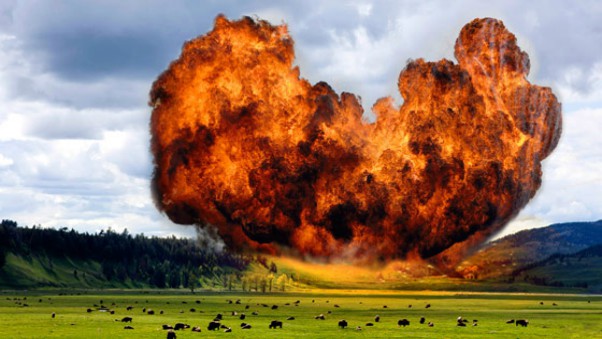 Underneath the quiet nature preserve of Yellowstone lies the most powerful and largest supervolcano on the planet. The fear of it erupting in our lifetime has put many on high alert, and recently, the Steamboat Geyser of Yellowstone gave another indication that the area is under strain.

‘More than 20 police, fire, and rescue vehicles descended upon the area around Yellowstone supervolcano this week to prepare for what could be a “life or death” emergency. Earlier this week, it was reported that there were a series of eruptions at the Steamboat Geyser, the worlds tallest and active geyser and they are expecting more minor eruptions to come.

Yellowstone National Park Public Affairs confirmed that there could be a supervolcano eruption imminently – and that they were putting themselves through their paces so that they were ready for any eventuality.’ 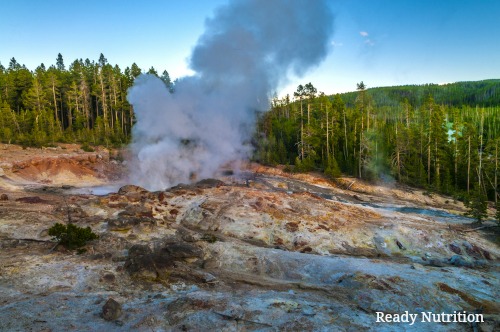 Seismologists who have monitored the area have warned for years that the area is under strain and have observed deformation in rocks occurring under Yellowstone. This deformation causes a change in pressure and magma underneath the surface.

In fact, last month, the same geyser produced similar activity giving cause for concern. Dr. Wendy Stovall, the deputy scientist in charge at the Yellowstone Volcano Observatory, a branch of the United States Geological Survey, said, “There is a lot of seismicity, or earthquake activity, and deformation around the geyser basin.” She also said, there is no cause for concern at this time. “Volcanoes all over the world have hydrothermal systems. “Because all the water goes away from the heat coming up. As long as there’s water and the geysers and hot springs and mud pots are still boiling, everything is fine.”

That said, Yellowstone National Park Public Affairs are not wasting any time and have begun preparations and training exercises. In fact, the emergency services associated with the National Park are discreetly performing training exercises to minimize local disturbances and to ensure that if the volcano erupts, they will be able to act decisively.

Morgan Warthin, a Yellowstone spokesman also discussed the challenges his team will face if there is a supervolcanic eruption at Yellowstone.

He said: “You know, the number one challenge is we are remote, so it takes a while to get to Yellowstone.”

During the simulation, family members of park employees, Xanterra employees and residents of Gardiner gave up their time to play the role of victims in the exercise.

When the test run began, responders from eight different agencies inside and outside the park dealt with the situation well.

What Would Happen if the Yellowstone Supervolcano Erupted?

Moreover, the amount of ash dispersed from the eruption could be so great that it could literally crush buildings, foul water supplies, clog electronics, ground airplanes, and irritate lungs. If that wasn’t enough to be bothersome, the toxic gases and chemicals would enter our atmosphere and cause toxic rain thus killing more humans, animals, and plants.

Given these facts, it is understandable why so many are trying to prepare for this. Be it preparing for a quick getaway or sheltering in place, there is much to prepare for. Luckily, there is still time to get some reserves in order.

How Much Warning Would We Have? 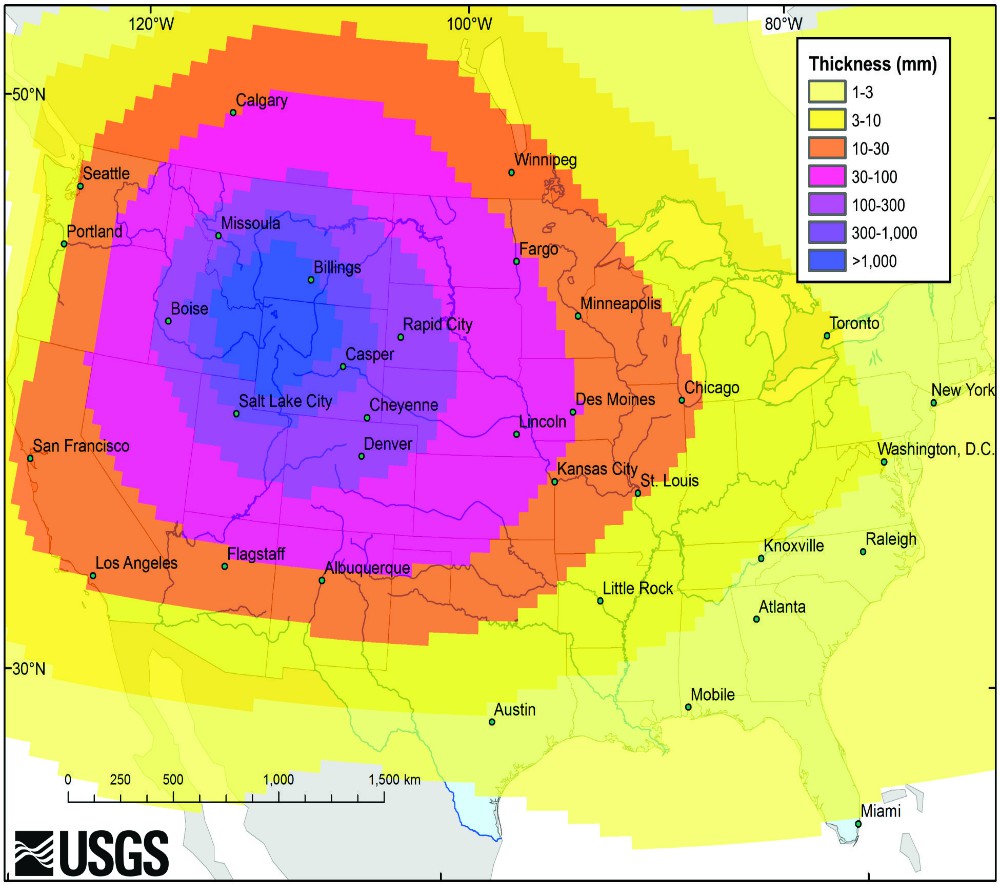 An example of what an ash cloud would look like after an eruption from a supervolcano.

So, will supervolcanoes give us any type of warning before they erupt? It turns out that supervolcanoes would provide a few warning signs that would give us a fairly definite timeline before they go off, but unfortunately, it’s not a very comforting timeline. According to a recent study, you’d have about a year or less to prepare.

Right before any super eruption though, there is one final stage — the decompression stage — characterized by the release of gas bubbles at the eruption site.

So, the study researchers decided to analyze quartz crystals at the site of one of these massive eruptions that erupted in California about 760,000 years ago, creating the Long Valley Caldera. Quartz crystals cover surface rims of eruption sites, so by analyzing them, the researchers were able to determine the rim growth rates times of the volcano based on the concentration of titanium in the crystals. By measuring the size and growth rates of these rims, they were able to determine the length of time it took for an explosion to happen once the decompression phase had begun.

Their analysis showed that more than 70% of rim growth occurred in less than a year, indicating that the quartz rims grow mostly in just the days or months prior to an eruption.

At first glance, most preppers would find that kind of warning to be a relief. After all, if someone told you that say, a nuclear war was going to happen in a year or that a tsunami was going to wipe out your home in a few months, you would have plenty of time to either get ready or get out of dodge.

But with a supervolcano, you’re dealing with an epic disaster that people and governments would need more time to prepare for.  That said, having these officials decide on when to sound the alarm will be the biggest struggle. “It’s going to be hard for scientists to convince themselves just because of our only partial understanding of the complexity of the processes that are taking place,” Jacob Lowenstern of the U.S. Geological Survey in Menlo Park, California, the scientist-in-charge of the Yellowstone Volcano Observatory says. Source

How To Prepare for the Long-Term

How does one prepare for a supervolcano? Survivability in this type of disaster is slim if you live in the surrounding areas. Suffice it to say, there would be mass casualties any way you look at it. This is the type of disaster that would be considered an end-of-the-world-as-we-know-it event and would change the way we live life on this planet for years to come. It is essential to understand this before you begin prepping for long-term survival.

Areas to concentrate your efforts on are preparing your vehicle for a last minute evacuation, having supplies to shelter in place for up to 6 months or more, having a way to protect yourself from breathing in toxic chemicals, having a long-term food source, and having a way to grow your own food.

Based on research on your part, find out if your location will be immediately affected. At this time, you must make a decision whether to bug in or bug out. Because you never know when the supervolcano will erupt, it would be wise to have bug out bags in multiple locations (the workplace, home, and the vehicle).

Depending on where you reside in relation to the supervolcano, millions of people may need to be evacuated, which even with a year’s heads up could turn into a massive humanitarian disaster. Similar to how officials plan localized evacuations, they will likely zone out the affected area and allow certain zones to leave one at a time. When it is your time to leave, make sure you have a clear plan on where you are headed, including where you will stay, etc. Moreover, make sure you keep your vehicle evacuation-ready.  This includes ensuring the vehicle is well-maintained with a full tank of gas, has the essential bug out supplies, has essential maps and navigational items. Follow the designated evacuation route and expect heavy traffic and delays.

Before you leave, prepare your home by turning off the gas, electricity, and water. Disconnect appliances to reduce the likelihood of electrical shock when power is restored.

If you are out of immediate impact and plan to shelter in place:

To supply the home for a supervolcano disaster, you need to plan for the long-term.  That ash will clog the atmosphere enough to block out the sun, disrupting the global climate enough to cause food shortages and mass famine. Therefore, your food sources may be all that you have to get your through. If you are lucky enough to have a hydroponic growing system, make sure you have a lot of seeds to support your dietary needs.

It’s not only essential to have long-term food reserves, but also know how to pack your food properly for the long-term.

Due to the toxic rain that would cause mass extinction in the area, you want to concentrate your efforts on storing as much water as possible, as well as, food and supplies to live off of for a long-term emergency. As a starting point, fill sinks and bathtubs with water as an extra supply for washing and get a good water filter with extra filters stored for future use. This is a great week-by-week preparedness course you can use to get your supplies organized and prepped for the longevity.

Communication will be limited, therefore add new batteries to your radio, contact family members and let them know your plans and backup plans before the disaster. Remember that communication and emergency services may be overwhelmed or damaged during this type of emergency. Have medical supplies prepped and extra prescription medications,

Another concern you should consider is the toxic air that will be present after the eruption. Two years ago, after the volcano eruption in Indonesia, thousands complained of lung irritation shortly after the eruption. At the time, a local official urged the government to send out medical teams to areas most affected by volcanic ash, as the health awareness of local people is low and they might not consider coughing fits or flulike symptoms to be very serious. He added that ongoing exposure to the ash will destroy the lungs of people inhaling it.  Having a way to protect your airways will greatly improve your health during this disaster. If you do not have access to a gas mask, have extra respiratory masks, handkerchiefs or cloth to cover your nose and mouth.

Once the eruption has ceased, stay indoors until the ash has settled. There could be a danger of roof collapse due to excess ash. If this is the case, seek emergency shelter elsewhere. To prevent toxic dust and ash from entering the home, close and seal all windows with duct tape and keep all heating, and air conditioning units and fans turned off. As well, because volcanic ash can clog engines, avoid running your vehicle. Otherwise, you could damage moving parts and stall vehicles. During this time, you should avoid driving in heavy ash fall unless absolutely required. If you need to drive, keep the speed down to 50 km per hour or slower.

If you have proper body protection, begin clearing ash from flat or low-pitched roofs and rain gutters. Protect yourself from ash by wearing long-sleeved shirts and pants, using goggles, and a respiratory mask.

To conclude, seismologists at Yellowstone will continue to monitor the area in hopes of learning more and gaining a better picture of the supervolcano below. Until then, their preparations and training will ensure their reaction times are spot on in order to help others get to safety. All we can do at this point, is hope for the best and prepare for the worst.