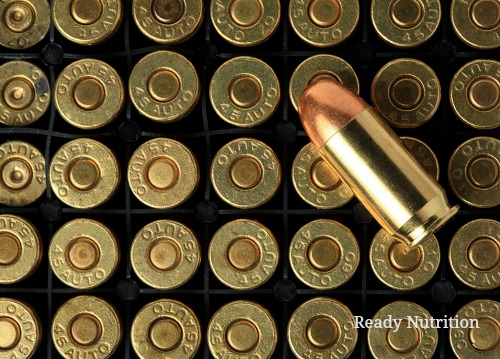 Guys and Gals, over the past weeks, we have gone into great detail on firearms, caring and maintaining firearms, and why preppers should diversify their ammunition supplies. This week, we are focusing on the .45 ACP – a worthy cartridge with a long and unique history, and it is also worth your consideration with regard to home defense and survival, for a number of reasons we’ll outline here today.  So, without further adieu, let’s get started!

The History of the .45 ACP Cartridge

I want to discuss the .45 ACP cartridge.  This information is worthwhile and the cartridge itself has a great deal of history behind it.  In 1898 the Spanish-American War (characterized by Teddy Roosevelt and his Rough Riders) came to a close, but the Philippine insurrection did not.  The Moros (Philippine islanders) were able to take a hit from the .38 handguns and the .30 Krag rifle the Army had in service…and keep coming.  They could not, however, “soak up” the .45 Long Colts and the 12-gauge buckshot used from personally-owned Colts and Winchesters.  Yes, back then, many could carry their own choice of weapons.

Two officers were crucial in determining the choice back in 1904.  At the behest of Brigadier General William Crozier (appointed Chief of Army Ordnance in 1901, a new position created by President Theodore Roosevelt), a board was formed comprised of two men.  Colonel John T. Thompson (Ordnance) and Colonel Louis A. LaGarde (Medical Corps) were tasked with finding the optimal sized cartridge for the U.S. Military.  LaGarde’s report contained the following summary:

“The Board was of the opinion that a bullet which will have the shock effect and stopping power at short ranges necessary for a military pistol or revolver should have a caliber not less than .45[caliber].”

There we have the first glimmerings of the beginnings of the .45 ACP, and I must mention the author of the article referenced, Peter G. Kokalis was the Senior Editor for Shotgun News with a lifetime of experience in shooting and reloading, as well as being a combat veteran.  Kokalis summarized the .45 ACP cartridge’s capabilities most eloquently.  In essence, he clears up a lot of misconceptions relating to kinetic energy of a round.  Most people equate high velocity with knockdown power.  For long-range shooting, this holds to be true in many cases.

What we’re dealing with here is short-range combat…where you (the homeowner) are protecting your house and family from a break-in at close ranges.  In such ranges, you will need stopping power.  Here are some terms you need to keep in mind:

Depth of penetration is the most important factor, as Kokalis outlines here, in this excerpted segment of his article:

“Most important of all, is the fact that penetration is without doubt the single most important parameter in the wound ballistics equation.  It has been determined that in law enforcement and self-defense scenarios, a minimum of 12 inches, and up to 18 inches of penetration will produce the most effective results – required to reach the body’s vital organs.  Once we’ve obtained the necessary penetration, the bullet that makes the biggest hole will do the most damage.

As a result of the above, there is only one possible conclusion.  The .45 ACP cartridge is the most effective handgun round – among those commonly available – that you can use in a gunfight.  Even anecdotal evidence over the last 100 years has proven this to be so countless times.”

Kokalis went on to explain that a 230-grain JHP (Jacketed Hollow Point) expands (on average) from .45 (that is .45 of an inch) to .65 with approximately 15.5 inches of penetration.  I must add his final words in the article, as they should drive the point home:

“This can be summarized in one sentence: use the largest caliber with the heaviest bullet, propelled at moderate velocity.  In other words, deploy with a handgun chambered for the .45 ACP cartridge.”

To clarify what he meant by “moderate velocity” is that other, faster bullets tend to go right through the target at close distances, whereas the .45 ACP (considered a low-velocity round at – on average – 930 feet per second) has both the penetration power and will “open up” for greater internal damage to the target.

To add my own words to Mr. Kokalis’, I have used other calibers, such as 9mm Luger, .38, and .45 Long Colt.  The .45 ACP is an excellent round that is also multipurpose when using different types of ammunition.  The +P rounds (in brands such as Buffalo Bore) turn your cartridge into a super-penetrator that can and will defeat body armor.  It is also a good round to protect against large and ferocious predators.  You can pick up the standard FMJ (Full Metal Jacket) rounds at 230 grains for under $40.00 for a box of 100 at your friendly Wal-Mart for target shooting.

They’re easy to reload, and economical: the .45 ACP will not bankrupt your savings while giving you that large caliber round with the stopping power you need.  As to the piece you wish to throw it out of, take your pick.  The 1911 is tried and true (in my humble opinion one of the finest handguns ever made), and has served our military nobly throughout its existence.  So, .45 ACP?  Try it, you’ll like it: the round will serve your needs well, and at a price you can afford.  Keep that powder dry and don’t store it with your primers!  JJ out! 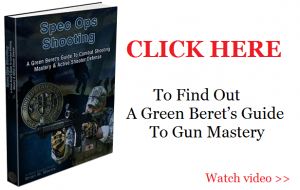 [Editor’sNote: Simply put, things can to hell in a hand basket very quickly following a disaster. The widespread breakdown of the social order leads to looting in disaster prone areas which leads to the importance of being able to defend one’s home, family and their preps during a disaster breakdown. Because home defense is such an important consideration, it is important to familiarize yourself with the best firearms and ammunition choices out there. Jeremiah Johnson has been relentless in writing information on this subject and brings up another well informed article on this ammunition choice.]

5 Nutritious, fast-growing vegetables that you need in your home garden