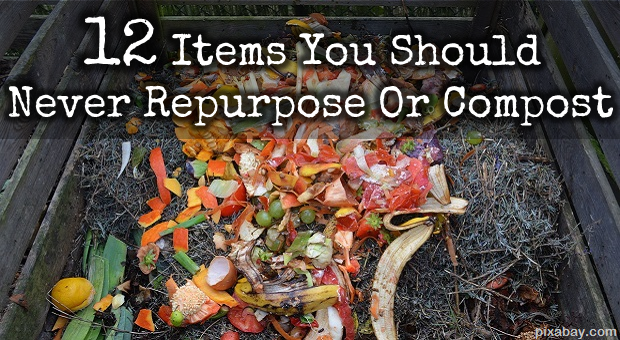 Repurposing items is a great way to avoid filling up landfills and wasting valuable resources. Many common household items are actually useful in more ways than one, such as eggshells. First they hold your eggs, then they send vital nutrients back into your compost pile or are a great addition to your chicken feed to help produce more eggs.

However, there are some items that should never be repurposed. The best way to avoid waste is to avoid these products altogether, though some of them are standard parts of modern living.

Still, try to find alternatives when you can.

Reusing motor oil for anything is a bad idea. It keeps our motors running smoothly but in the process it picks up flecks of metal and other gunk. I know that many people use it to treat and preserve wood but it’s a bad idea.

For one, it makes the wood more flammable and for another, you’re exposing your family to petroleum and other chemicals, which are known to be carcinogenic. Even synthetic oils contain a certain amount of petroleum, along with other toxic chemicals that are meant to lubricate your motor.

Some people also use old motor oil to start fires. This is bad because it releases all of those chemicals into the air that you (and your neighbors) are breathing. Obviously, this is something that you want to avoid.

Instead, recycle your oil properly in approved containers. Most auto parts stores and garages offer this service free of charge. These items are meant to be used only once and then recycled, except in the case of Styrofoam which typically can’t even be recycled. Our lips leave a film on the rim of water bottles that can cause bacteria to grow and the necks are so narrow that they’re difficult to clean. Also, many are made with plastics that release toxic chemicals over time.

If you want to repurpose plastic bottles, find ones that are made from #2, #4 or #5 plastics and recycle them when they become cracked, cloudy or discolored. Also, if you’re re-using them as drinking bottles, recycle them when the contents begin to taste like plastic. That is a sign that the plastic is degrading and can release toxic chemicals into the liquid.

If you use Lexan or #7 polycarbonate bottles for hiking, never put hot liquids in them and don’t expose them to sunlight that can warm the plastic. Also, don’t clean polycarbonate containers with hot water, harsh detergents or bleach.

Never reuse (or even use once if you can avoid it) #3 plastic (PVC), #6 plastic (polystyrene) and many #7 plastics (polycarbonate). They can leach toxins such s phthalates, dioxins and bishphenol-A into your food.

Even better, choose a stainless steel water bottle to reuse.

Unless the container is coated internally with an enamel coating, don’t re-use aluminum dishes because the aluminum will leach into your foods.

The same goes for using them as starter planters for seeds. Aluminum has been linked to several different health conditions including Alzheimer’s disease. Though it’s tempting to toss sawdust on your compost pile, use it to line your chicken cages or livestock stalls or line your planters, you shouldn’t do it unless you know exactly where it came from.

Often sawdust contains chemicals that were used to treat the wood.

That being said, if you know exactly where the sawdust came from and the source was non-toxic, it’s fine to use in your compost pile or in your flower beds.

Meat should never be added to a compost pile and gray water tainted with meat should be sent to the sewer or septic because of bad bacteria that may be present. Also, chunks may clog your gray water system and using it in your compost pile will cause a horrible smell that attracts all sorts of rodents, flies and animals seeking a free meal. Walnuts and shells shouldn’t be added to your compost pile because walnut trees release the chemical juglone that’s toxic to some plants and vegetables including tomatoes.

Though a handful of walnuts or shells won’t cause much damage, especially if your pile is large, you should find another way to discard large amounts of shells or nuts. Try putting the extra nuts in your bird feeders.

Just FYI, walnuts are toxic to dogs and horses, so don’t think you’re rewarding your pet by giving him walnuts.

Animal droppings from any type of carnivore should never be used in a compost pile. They’re a breeding ground for bad bacteria and can ruin your entire pile. The same goes for rice – cooked rice attracts bacteria that is bad for your compost pile and dry rice doesn’t decompose well. Adding diseased plants to your compost pile can add fungi and bacteria to your pile that is undesirable.

The same goes for the soil that the plants were in.

If the plant is diseased and you reuse or repurpose the soil to grow other plants, you’re simply transferring the disease to the new plants. Toss it in the garbage instead.

While it’s fine to repurpose magazines, colored paper or wrapping paper, they should never go in your compost pile because the chemicals used to add the color and the gloss can be toxic.

The ink doesn’t break down properly so these items should be tossed into your recycling bin or repurposed as note paper, collages or, in the case of colored paper or comics, wrapping paper. The only time that you should ever repurpose used cooking oil is if you’re making biofuel. Other than that, cooking oils break down when they’re heated and collect food particles that attract bacteria.

It shouldn’t be added to your compost pile either because it can disrupt the moisture level in your pile or will attract unwanted pests.

But turning it into biodiesel might be a solution to repurpose it.

Though this may seem like common sense, single-use personal hygiene items such as tampons, pads, tissues and diapers should never be washed and reused, nor should they go on the compost pile.

They have been contaminated with bodily fluids and are not suitable for recycling, reusing, repurposing or composting. If you live in a house that was built prior to 1978, most of the original paint likely contains lead.

It was banned for use in household paints in that year but if you live in an older house, you likely have some lead-based paint in the original layers.

Don’t reuse old window sills, banister railings or anything painted when the house was built in any of your repurposing projects. Don’t burn them, either. Just send them to the dump.

In the scheme of things, there is very little that you can’t repurpose, recycle or add to your compost pile but these are a few items that you should avoid. If you can think of anything else that shouldn’t be repurposed or added to the compost pile, please add them in the comments section below.

How to Install Raised Garden Beds