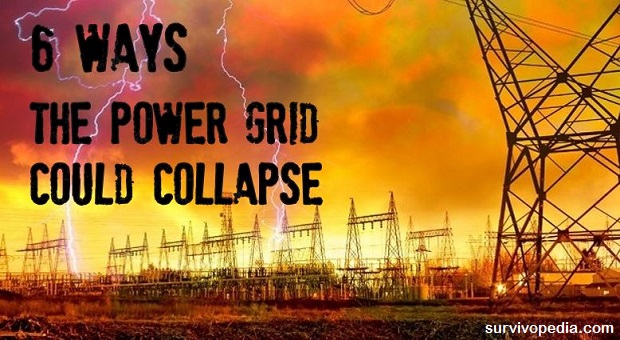 Of all our infrastructure, the electrical power grid is the most fragile. In the 2013 Infrastructure Report Card, prepared by the American Society of Civil Engineers, Energy received a grade of D. The only reason it was that high, was that the energy category includes all classes of energy, not just electrical energy.

However, in the narrative, the ASCE described the true condition of the electrical grid, declaring that it needed over one trillion dollars of investment to survive the next ten years.

The problem is that our electrical grid, like much of our infrastructure, was designed for a 50 year lifespan. If you look at the average age of our power plants and distribution network, it’s clear that way too much of it is over well over the halfway point in its lifespan. In fact, there is a considerable amount of it that is still in use, even though it is past its programmed life.

However, that’s a little misleading. The only reason that the damage to the grid is fixed so rapidly in cases like a hurricane is that that power companies send in teams from outside the area to help with repairs. If there was a nationwide event that caused the loss of electrical power, it would take much longer to repair the damage; both due to a lack of crews and a lack of necessary equipment.

When we talk about the grid, we are actually talking about three independent, but interconnected grids. There is an eastern grid, a western grid and the Texas grid. So, taking the grid down actually requires taking three separate grids.

Destruction of the grid, regardless of whether it is by intent or by accident is actually not all that hard to accomplish.

The entire grid is interconnected and to some extent automated. When one part of the grid becomes overloaded by demand or by loss of power production capability, it automatically compensates, bringing in resources from farther away to provide the needed power. Were that to happen enough times, the whole system would become overloaded.

Of course, before that happened the engineers controlling the grid would put emergency procedures into effect, probably cutting off power to certain regions, in order to save the whole. There are probably automated protocols already in the system which would kick into effect automatically.

Experts in the energy industry have said that the entire grid could be taken down, nationwide, by destroying ten specific sub-stations. These ten sub-stations (which for security reasons aren’t mentioned in the open press) are the most critical nodes of the grid. Loss of them would make the rest of the grid non-functional.

So, what sorts of situations could cause a nationwide problem with the power grid, creating a general collapse?

Of all the possible disasters which could cause problems with the grid, an EMP attack has the potential to be the most dangerous. An EMP occurs when a nuclear bomb explodes above the Earth’s atmosphere. Since there is no atmosphere to convert the bomb’s energy to mechanical energy in the form of a shock wave, all of the bomb’s energy goes out as electromagnetic energy.

That energy is enough to fry all solid-state electronics that it comes into contact with. So, not only would we be without electrical power, but even if the power could miraculously be restored, nobody would have any working electronics to use. Society would literally be set back by over 100 years.

We depend so much on electronics in our modern society, using computers to control everything from nuclear plants to automobiles. After an EMP, we wouldn’t be able to cook our food, drive our cars, communicate with one another or buy anything. All manufacturing would come to a standstill, as well as much of agriculture, the petroleum industry and the medical industry.

An EMP attack is not as complicated as it may seem. All it would require is a nuclear bomb and a missile that could launch the bomb above our atmosphere. The infamous SKUD missile, which is a very simple device, is barely powerful enough to do that.

Both North Korea and Iran have missiles which are powerful enough to launch such an attack, from either the Atlantic Ocean or the Gulf of Mexico. Such a device, exploded over the center of the United States, would disable over 90% of the country’s grid and electronics.

Experts believe that an EMP would result in the deaths of 90% of American citizens within a year. The first wave of people to die would be those that need extensive medical care. After that, the majority that died would be from starvation. It would take at least two years to replace sub-stations and power plants to the point where electrical power could be sent out over the grid once again. However, with the high death rate, the actual time might be much longer.

Solar flares are large masses of the gaseous material that the sun is made of, which fly off of the sun, forming “spikes” that are at times thousands of miles long. These can also be accompanied by electromechanical activity, much like that produced by an EMP attack.

In the 1800s, there was a solar storm that was serious enough to create electromechanical radiation which would have had about the same effect as an EMP attack. Fortunately, our ancestors weren’t as dependent on electricity as we are and solid-state electronics hadn’t even been invented yet. So, while the electromagnetic energy hit the earth, it didn’t do any damage.

There was some major concern about a repeat event in the fall of 2014. NASA had put an alert out about this event, warning that electronics could be destroyed and the grid could go down, nationwide. Fortunately, when the event happened, the electromagnetic energy went in a different direction and missed the Earth.

But another one could happen at any time.

We tend to think of terrorists as not being all that sophisticated, but they are more sophisticated than we realize. Any underground organization which can use the internet to recruit members who are willing to be suicide bombers must have a pretty good understanding of both technology and human psychology.

In 2013 there was an attack on an electrical substation in California. An unknown number of gunmen shot the transformers in the substation over a period of 20 minutes, making holes that caused the coolant to drain out of them and rendering them useless.

Few know about that event, because it has been hushed up. They were able to reroute power for that community, keeping everyone supplied with what they needed while repairs were undertaken. Even so, the crime was never solved and nobody knows who did it. The prevailing theory is that this was a practice run for a much larger future terrorist attack.

Should a group of terrorists, such as ISIS or Al Queda want to make a widespread attack that would affect people all across the nation, this would be a very effective way to do so. Our electrical substations are not guarded, so they could destroy transformers and get away, before anyone knew what had happened. With widespread hacking going on around the world, it would be foolish to ignore the possibilities of cyberterrorism or cyberwarfare as a means of taking down the grid. Our country has put very little effort into using the internet as a tool of war, especially compared to other countries.

Russia and China are the world leaders in hacking the internet. While the Russian military has done some testing, most of Russia’s hacking talent is limited to stealing money. However, China has an actual cyberwarfare division of their military. They are trained and equipped to take over or take down anyone’s computers, power systems, communications and military systems.

We are decades behind China in this effort. If they were to launch a serious cyberattack on the United States, we would be essentially defenseless. While government departments and the military are working to close the gap, it will take considerable time to make that happen.

There have been “test attacks” against the grid, aimed at both nuclear and conventional power plants. In these attacks, which have been kept under wraps, the hackers took temporary control over those facilities, as a test to see if they could. While no damage was done, it showed how easy it would be for the hackers to take control of a power plant and totally disable it.

Through the years in which nuclear power has been in use, there have been a number of spectacular accidents. Due to the nature of nuclear power, when accidents happen, they tend to be serious. That’s why there are so many fail-safes built into the systems. However, even with all care that is made to ensure their safety, nuclear power plants can fail because of things outside of the designers’ control. The Fujushima accident in 2012 is the most obvious example of these. While that plant had all the normal safety measures in place, it couldn’t survive the combination of an earthquake and a tsunami. We still don’t know how much damage that accident will ultimately cause.

Perhaps the greater risk from such an accident in the United States is the political fallout, rather than the radioactive sort. Our progressive liberal government doesn’t like nuclear power to start with. Such an accident might just provide the impetus they would need to shut them all down, regardless of what that would do to the grid.

There is a current push for clean, renewable energy sources.

I’m actually all for that, but I’m concerned about the government’s efforts to bring it about. You can’t just legislate something or write a new regulation and expect it to exist. It takes time and money to turn those government mandates into reality.

Of course, the government doesn’t see it that way, citing that there is technology which will allow coal-fired plants to meet the new regulations. However, that is an experimental technology, which hasn’t been fully tested and isn’t ready for use on a full-sized plant.

So, at the stroke of a pen, the government has essentially cut our country’s energy production by almost 40%. How? Simply by creating new regulations, which didn’t even have to get congressional approval. With that type of regulation going on, we could soon find that there’s not enough left to power the grid.

Could Collapse At Anytime: “When It Ends, All Hell Is Going To Break Loose”