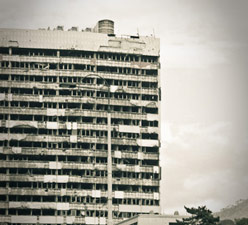 Editor’s Note: When the Balkan wars erupted in Europe during the 1990′s people literally went from sipping coffees on their neighborhood streets to a war zone almost overnight. Most did not see it coming. Even in the midst of collapse many believed it was a temporary situation that would soon pass. But food, medical supplies and other necessities quickly began to run out. Tens of thousands of people were encircled by heavily armed military, snipers, and artillery. There was no where to go. In the following article from Selco of SHTF School you’ll get a first-hand account from someone who was there and was forced to make difficult decisions just to put powdered eggs on the table for his family and friends. Specifically, Selco details the supplies and tradegoods that became important in the immediate aftermath of the collapse of the civilization around him.

It is a harrowing look into a life many of us can only imagine.

Selco is the founder of the SHTF School web site and creator of the One Year In Hell Survival Course.

First Trades after Collapse
By Selco

The items for trade during my SHTF very often changed value, and some of them became unavailable for some period of time, just to suddenly show up again much more expensive.

Yes, situation in the city dictated that, but also people, the black market lords made this happen. The whole situation was always changing where and if you can find what you were looking for.

Some of the items that were circulating in the city were completely new to everyone, one of the reasons was that all sorts of stuff from humanitarian aid was coming to the city through different channels and from all different parts of the world.

Some of those things became popular fast, others remained completely strange for us, but all had some kind of value.

Of course practical things like MRE were very good to have. Some other things like Turkish army crackers (salt cookies, or so called „Turks“) were strange for us. Taste was awkward, thats why they had lower value, but we were starving so of course everyone would eat it and trade it.
In one period there were big amounts of some French cigarettes in the city, we called it „black tobacco“.

It was very very strong tobacco, packaged in nice small boxes, and you simply did not need too much of those daily, even if you were very passionate smoker. Simply way too strong.

Some “smart” guy smuggled this into the city and it is perfect example of successful product besides weapons and ammunition for trading.

There were many new items for us, strange new kind of rice (was much too soft), canned meat without any declaration of meat type or expiration date (we called it „sick horse“). We ate it and used grease leftovers for lamps. Sometimes there were also big metal sealed boxes with dry cookies inside – some of the boxes had expiration dates that said it was expired like 20 years ago, we called it „Vietnam war cookies“ and we ate it and trade it as well.
Of course it was always a good few days when we had some sort of food. In many other periods (most of the time) we ate much much worse things. Often soup with anything we could find that could provide some energy.

One of the items in the beginning of everything that was very interesting for me was powdered eggs.

As I can remember, we did not see that before, I mean we heard it from the stories of the old guys who survived WW2 that they used it a lot in the years after that war (and they call it Trumans eggs) because it was coming in the area as a part of humanitarian aid since everything was destroyed and folks were starving.

Those eggs were interesting for me because we loved eggs, and obviously it became impossible to have real eggs. That is why food in urban survival is just a very bad version of food in wilderness survival. Rats and pigeons and some people probably also ate all dogs and cats. That was in the later months after we were surrounded without any way out and lost all basics like power and drinking water.

One day we heard that powdered eggs can be bought from some guys who had lots of stuff taken from humanitarian aid convoy.

Violence and shootings were already happening everywhere in the city, but it was period when we still believed it was temporary. There were three of us who went there to visit these guys. One of us had pistol, but that was not much help because none of us already realized how dangerous everything had become.

It was time when the police force still existed but on the other hand other „police gangs“ started to operate and you could not say who is who, and what will happen when you run into them.

We had German money for buying the eggs, at that moment you could still buy something with (foreign) money, but you could not expect any fixed price and price of everything was completely based on what happens in the negotiation.

Man who opened door for us took us to the living room of the apartment after we told him that we want to buy some goods from him.
There were 4 more guys sitting next to table there, actually one of them was sleeping with his head on the table.

One was trying to make some kind of sandwich with dry meat using a big old bayonet, room stank like someone died there.

All of them looked pretty rough and ready for everything, three of us with one pistol looked like easy prey for them.

Man who opened door for us asked us who sent us, we said name and he said: „Who is that? I do not know him.“

Silence was ankward, I could feel like something is crawling over my back at that moment, especially when I noticed rifles standing next to the chairs where those guys were sitting, and on the carpet under the table there was big stain that suspiciously looked like blood.

Man started to laugh and said „OK, I am kidding, I know him, just say what do you need.“

Fear that crawled over my back started to disappear slowly, but still we were like sitting ducks there.

We said what we wanted and he asked for how much money we want powdered eggs.

My cousin stupidly took his money from pocket and said how much money we have.

Guy said „Give me that!“

Few seconds there was nothing, but when other guys from the table started to stare at us, my cousin gave him the money. From one of the rooms, we herad that someone shouted „Oh you [email protected]#!erf!*&er“ and then sounds that someone is being beaten.

Man started to slowly count money, looking at us with smile, after he put money in his pocket and said: „Ok, you can have one box of powder for this money“

Three of us knew that we were ripped off, but I just said „OK, it is a deal, we need to go now“.
We took the box and left the apartment.

On the outside hallway we noticed one more guy who was standing there as a guard for the apartment.
When we were entering the apartment we did not even notice him.

We came home safely that time, feeling that we were scammed there was gone very soon because we realized that guys could kill us very easily if they wanted to.

Luckily at that moment they maybe did not feel like it, or what was most probable whole situation in the city had not reached level yet where they could do that easy and openly.

Everyone still thought absence of rules and law are temporary. That changed soon, people started to kill each other as a part of trade scams. Later often just out of curiosity what other guy might still hide in his pockets and did not show.

The one of us who had gun on his belt during the trade said „Oh man, I completely forgot that I had weapon with me there beceause how those guys looked“.

Then we realized it was luck too because he did not pull the gun there in the middle of everything because we would end up dead for sure. Do you see a pattern there? Yes, in post collapse so many things can go wrong and often did.

Thats why learning about survival and preparedness is most important right now. Do not delay when SHTF it comes out of nowhere. We still have registration for limited amount of students for the Survival Boot Camp open for few days if you want to get better insights into this.

I remember that trade very well because we were scared, but much more important was feelings afterwards when we all realized that feelings of „kindness“ but also „fear“ went away. That day we realized we are living in new world with new rules and acting like we did in civilized times or showing weakness can have brutal consequences.

We started to change and learn. We started to look and act like those guys during our trades, and whenever we found someone who was even harder and better at trading we also did what they did to us. We were lucky or maybe smart enough that we learned new rules very fast. There was little room for error. either you end up dead, or learn fast.

That was one of my first trades after the collapse, I traded many times later again, and I often used similar setup of intimidation like those guys there.

But there I learned for the first time few simple rules about trading like: never go to (closed) places where you do not know who to expect, how many, how well armed they are and similar stuff. Never have all your goods (or money) for trade with you, have plan what to do in case of surprises, never accept offers so easily because it can be seen as weakness, and weakness is sometimes call for problem, and many more.

And one more rule that we learned and you should never forget is to never go and risk your life because of pure „luxury items“ like that powdered eggs were for us at that moment.

Please comment below, discuss in our forum or if you act now you can still join my Survival Boot Camp before we close registrations.

You can follow Selco’s story at SHTF School and learn how he survived one year in hell.

A Survival Q & A: Living Through SHTF In the Middle of A War Zone

Advice From A Collapse Survivor: “RUN!” From Major Cities

Collapse Reality: “If I Had to Be an Animal, I Was an Animal. It Was About Survival.”