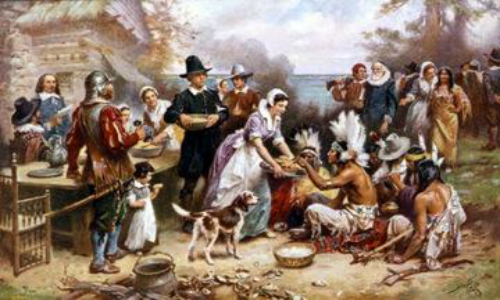 Many know of the hardships the Pilgrims faced when they set foot upon the American land.  Coupled with being ill equipped with food and provisions and a wheat crop failure, starvation was a factor amongst many of the Pilgrims.  There were only a handful of original Pilgrims left and they knew that they were looking at death. The Pilgrims were not prepared for the harsh wilderness they were up against.

If it were not for their neighbors, the Indians, the Pilgrim would not have made it through the harsh, bleak northeast winter.

How Did the Indians Help?

A group of  Wampanoag Native Americans by the names of Squanto, Samoset and Chief Massasoit came to see the Pilgrims to see about a peace treaty.  The custom of the Wampanoag Indians was to provide a guest with a share of whatever food there was.  After the share of food was given to the Pilgrims, Squanto, the translator for the Wampanoag Indians saw that the Pilgrims food supply was almost depleted.  He decided to stay and help the Pilgrims.  Squanto stayed with the Pilgrims for 18 months and showed them how to build adequate housing to keep warm during the winter, weather patterns for growing crops, and natural fertilization methods, and leaves that could be used as medicine.  Due to the wheat crop failure, the Native Americans showed Pilgrims how to substitute cornmeal for flour.  This act of neighbor helping neighbor saved the lives of many colonists.  Squanto was such a value to the Pilgrims that William Bradford, the mayor at the time, wrote of him as a “special instrument sent by God for their good beyond their expectations.”

Thanks to the help of Squanto and other helpful Indians, the first harvest ensured the survival of New Plymouth. Captain Myles Standish, the first commander of Plymouth Colony, invited Squanto, Samoset, Chief Massasoit, and their families to the harvest festival. There were nearly twice as many guests (over 90 Native Americans) as hosts, so Chief Massasoit brought more food to the table, including 5 welcome deer, turkey, beans, squash, corn bread and berries.  The Pilgrims and the Indians feasted for three days and drank wine made from wild grapes.  I am sure that the Pilgrims were incredibly thankful for the kind hearted Native Americans who came to their aide.

A Time for Thanksgiving

Thanksgiving is not only a time to give thanks to God for blessings. It is also a time to give to those who have not been as prudent as ourselves.  Helping in times of dire need shows the kindness of the human spirit.  It gives hope to those who have nothing left.  It may be the only meal that person will have for a long time.  In the times to come, Thanksgiving may not be about how big of a “spread” you can put upon a table, but a time to sit and reflect on how thankful you are that your family is safe and healthy and together.

As we are facing turbulent times, it seem as if our fates may be intermingling with our ancestors.  Now is the time to remember that we should help our neighbors and be kind hearted to those who may not be able to help themselves.   And as we each sit down to dine on our Thanksgiving feasts, let us remember the lessons our Native American friends taught the Pilgrims.  The lessons of preparation, survival and kindness.  There may be a time in the near future when we will need to come to some one’s aide and to teach them how to survive in a cold, bleak wilderness.

How to Get a Year Supply of Firewood for $20!