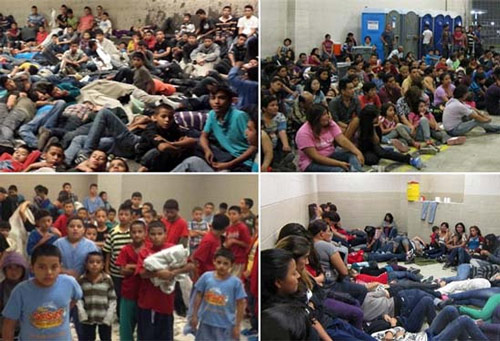 Back in July of 2014, at the height of President Obama’s officially authorized immigration invasion of the southern border, we and others warned that hundreds of thousands of undocumented individuals entering the United States would bring with them any number of communicable diseases. The idea was summarily rejected by the left as hate speech and conspiracy. And though the mainstream media failed to report it, our fears were initially confirmed when the President ordered civilian security forces to take over immigrant internment camps. It was widely reported at the time by alternative media that disease was, in fact, spreading wildly within these centers. Still the majority of the public supportive of open illegal immigration refused to believe it. But now, as their children start contracting the deadly measles virus – which by the way “popped out of nowhere” – maybe they’ll start rethinking how this virus got here.

The following analysis from Karl Denninger of Market Ticker shows that it is not only possible, but quite likely that the measles virus, and perhaps others, were brought into the United States by non other than undocumented illegal aliens.

And Now, The Truth (Measles Outbreak)
By Karl Denninger

Hoh hoh hoh, look what the cat dragged in…

Among the 110 California patients, 49 (45%) were unvaccinated; five (5%) had 1 dose of measles-containing vaccine, seven (6%) had 2 doses, one (1%) had 3 doses, 47 (43%) had unknown or undocumented vaccination status, and one (1%) had immunoglobulin G seropositivity documented, which indicates prior vaccination or measles infection at an undetermined time. Twelve of the unvaccinated patients were infants too young to be vaccinated. Among the 37 remaining vaccine-eligible patients, 28 (67%) were intentionally unvaccinated because of personal beliefs, and one was on an alternative plan for vaccination.

In other words of the people who got sick roughly half were illegal invaders.

In point of fact only one quarter were intentionally-unvaccinated kids who were here in America legally, either as citizens or otherwise.

43%, or nearly double the number, were “unknown or undocumented” as to their vaccinated status, which means they weren’t here in the country legally.

If you were a visitor (e.g. tourist) that came into the country and got sick, you’d be asked and would be able to explain.

Who is “unknown or undocumented” as to their vaccination status? That’s simple: Illegal invaders.

Cut the **** people — it is not a bunch of “anti-vaxxers” that caused the majority of this outbreak. 12 of the unvaccinated people were too young; that risk pool always exists.

In addition despite the claim that the measles vaccine is 97% effective if you have either 2 or 3 doses the actual field failure rate appears to be rather high. In other words are they’re lying about the effectiveness of the vaccine too? And these are clinical failures — the number of people that get a sub-clinical case (and thus never go to the doctor or get diagnosed) is probably much higher.

As of this point the CDC says they do not know who patient zero is. Uh huh.

Or maybe they do, but it’s someone with an “undocumented” history in more ways than one.

Anyone want to take bets on whether the mainstream media honestly reports any of this?

Vaccines and “politicized science” eh? How about the truth as regards to the infection vectors and the illegal invaders that are both contracting and spreading it?

Watch: How Liberals React When Asked to House An Illegal Immigrant Child In Their Homes