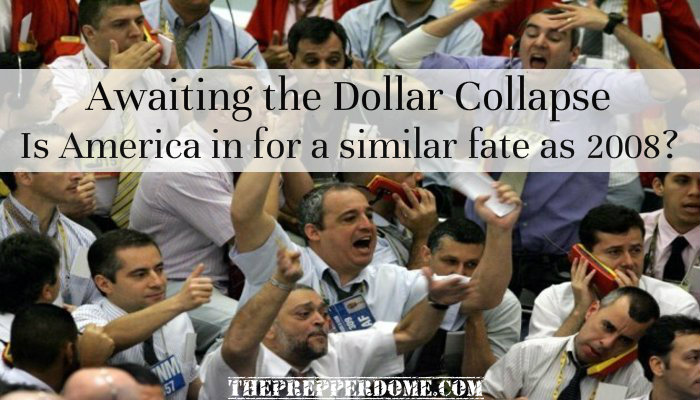 World powers have been showing considerable lack of confidence in the state of Dollar at the moment; they are not doing it without reason. For about two years the Dollar has continuously been in a declining position against the Euro. There is a long list of events that have led to this state of events; this article will take a look at those political happenings. Most of the indicators of the expected Dollar collapse are frighteningly identical to the financial crisis of the year 2008. If America is in for a similar fate, things currently do not look very pretty.

Related:How to Hide Your Money Where the Bankers Won’t Find it

Take a look at the following events that are taking place inside the United States for some time, drawing the connection between both the events is not very difficult:

Bad Beginning for Stock Market in 2015:

From a steady $106 at the beginning of this year, price of oil has reduced to $48 per barrel. There are not many instances of such a decline in oil prices in history; only one, to be specific. After the Great Depression, US went through a similar dip in oil prices. The historical evidence portrays a very bleak picture of the events that followed.

Evidence from history again does not look very encouraging, as the last time Americans celebrated gasoline price hike, it was not good news. Year 2008 saw a similar price hike and the events that followed are not anyone’s fondest memories.

Statistical evidence shows that when industrial commodities go down on their prices that needs to be taken as a warning bell. History of the 2008 seems to be repeating in a very uniform pattern.Most of the industry produced goods are not selling at competitive rates right now.

Slowing inflation in other words also means an economy which is failing to keep up. The expected dollar collapse seems like a similar affair as the 2008 depression.

Investors are losing trust in the state of stock markets. A number of junk bonds have collapsed and investors are bailing out of these. There seems to be a pattern between this expected dollar collapse and last time’s financial crisis, if you observe closely.

Related:Is It Too Late to Start Preparing for Economic Collapse?

A number of indicators point out towards the similarities between economic upsets of 2008 and the expected dollar collapse. Last time the US went through a similar affair many people lost their jobs and homes and families were disrupted. In case we fail to handle this grand economic upset all set to hit US, we may as well be ready for a similar replay of events.

Military Site’s Forecast for 2025: Economic Collapse Will Lead to Massive 78% Depopulation in America