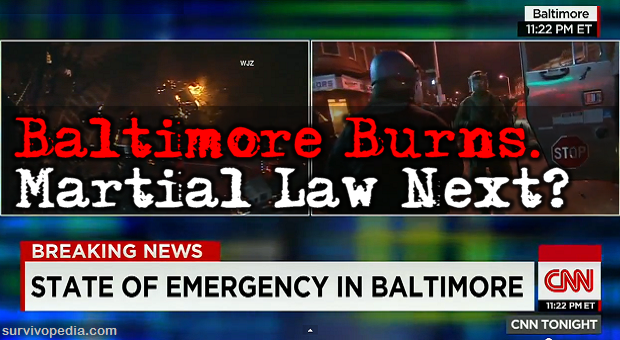 The recent case of Freddie Gray adds one more mark against America’s police, as the nation tries to come to grips with what has happened in this case.

The facts are still unclear, but according to the family’s lawyer, 80% of Gray’s spinal column was severed, by the time he received medical attention. As he was in police custody at the time, it’s clear the police are at least somewhat at fault.

Like other such cases, we won’t truly know what happened until the dust settles and the investigators find all the facts. But it appears that the Baltimore police department expects that there was at least some foul play, as they have temporarily suspended six officers, pending the results of the investigation.

At a minimum, it appears clear that Grey needed medical attention when he was captured by the police. Eyewitness reports say that when he was apprehended, he had trouble walking. Other reports say that he was screaming in agony. By the time he arrived at the police station a half-hour later, he couldn’t breathe or talk. It was at that time that paramedics were called to the scene, even though it appears that he might have been injured earlier.

There are reports from the police union that some police officers are driving transport vehicles in such a manner as to injure the prisoners held inside. As Freddie’s seat belt wasn’t fastened, he would have had no protection, if that was the case.

Like other cases, this could be another sad situation of the police brutality that has been gaining widespread press in recent times. But it could also be a simple mistake. I’d have to say though, this one doesn’t appear like a simple mistake to me. Police are regularly charged with the safety of prisoners as they transport them and have rules and regulations to ensure their safety. At an absolute minimum, it seems like those were totally ignored.

This case leaves many unanswered questions, some of which won’t be answered for months. Nevertheless, like many other high-profile cases involving the death of black youth, some have already made up their minds, playing judge, jury and wanting to play executioner.

In the little more than a week that has passed since Grey’s death, there have been numerous protests and the usual suspects have been beating the race-baiting drum once again. However, it seems like the beating of that drum might be a little quieter in this case than in others. But the story, like usual, is in the protests that are being carried out.

More than 2,000 local Afro-Americans turned out to march on the police station, alongside family members. There was nothing wrong with that, as the Constitution gives us the right to peaceably protest.

But those friends and neighbors weren’t the only ones who turned out. Hidden amongst them, there were at least 100 imported protesters. Like Ferguson and New York, I think these were brought in to turn a sad situation, into a violent one. On Saturday evening, as the protest march passed near the baseball stadium, this group went into action. They started attacking people and cars, damaging a number of cars and putting a few people into the hospital.

One car that was attacked was a station wagon driven by a white family on their way to the ball game. Protesters broke their windows, beat on the car, denting it and stuck their hands through the broken windows, either to steal from the family or to drag them out of the car. Seeing what was happening, the driver put his car in reverse, backing out of the bottleneck he found himself in. That seemed to be enough to get the protesters to abandon their attack and move on to other things.

This seems suspicious to me, as the only motivation for them to stop that attack was the driver moving his car. In doing so, he pulled it out and away from the peaceful protesters. That seems to be what stopped the attack. It could be that they stopped their attack, simply because not enough people could see them?

It’s clear that the group that was attacking people and damaging cars was separate from the rest of the protesters, as the main body of protesters are the ones who eventually caused them to stop. The police didn’t, although they took several suspects into custody.

The Surprising Reaction of the Mayor

Before the protests, Mayor Rawlings-Blake, who happens to be an Afro-American woman, clearly stated that the city would allow peaceful demonstrations, but that there was no place for lawlessness or violence. That’s the type of statement we would expect any mayor to have, allowing people to exercise their First Amendment rights, while maintaining law and order.

But on Sunday night, things seem to have changed. Eyewitness reports, on the scene, said that police stood by, allowing the violent protesters to have their way. “Their way” included breaking out the windows of a police cruiser, as well as the car I mentioned earlier and other cars. A burning trash can was thrown at police, as an improvised Molotov Cocktail, but they did nothing. Even when the peaceful protesters asked them to intervene, they did nothing, simply standing and watching.

Later, in a second press conference, the mayor is quoted as saying, “While we tried to make sure that they were protected from the cars and the other things that were going on, we also gave those who wished to destroy space to do that as well.”

What? The mayor the city and the police department allowed people to destroy private and city property? That’s unheard of. Giving space for peaceful demonstration is part of our nation’s fabric, giving space for intentional, violent destruction isn’t.

Is this what America is coming to? Are the honest citizens now at the non-existent mercy of the hooligans?

Are our liberal politicians so enthralled with their ideology that they will allow criminals to hurt law-abiding citizens, just so that their political platform can go forward?

If so, our nation is in grave danger.

Where Are We Going?

I have to wonder where this country is going. In the last six years, we’ve seen so many things happen that I can truly say that Obama’s “fundamental change” is going on all around us. From pandering the enemies to allowing violent mobs to have their way, the rule of law and order seems to be falling apart all around us.

Our racial relations have gone backwards by a good 50 years. This isn’t by accident, but has been promulgated by people who have made a distinct effort to make it happen. It appears that they are trying to drive this country to a racial civil war. If they succeed, it may make the blood of our first civil war seem slight.

Of course, there’s a second possibility as well. That is to drive us to the point of that war, so that the president would have sufficient reason to declare nationwide martial law. While that would stop the war, it would do so at the cost of taking away our freedom. That’s a price that I’m sure Obama is more than willing to pay.

There is little you and I can do to change the course that our country is embarked upon. We still have to wait another year and a half for the next elections. Even then, the media has more control over the outcome of those elections than we do. Still, at that time, we can make our voice heard by voting in true conservative politicians, not RINOs. Then, and only then, is there a chance of changing the country’s political direction.

But we need to start before that. We need to build bridges between the various races that live and work around us.

On top of that, our number one responsibility is to protect our families. I will never go out and attack someone because of their race, color, creed or religion; but I won’t allow them to catch me off-guard, should they try to attack me for the same.

Like any true soldier, I prefer peace to war. But I understand that to have peace, I need to be ready for war.

his article has been written by Bill White for Survivopedia.