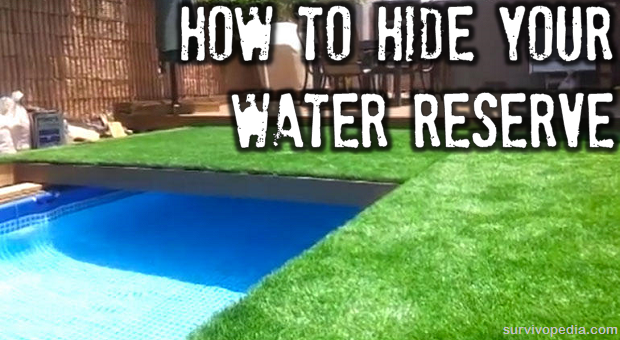 One of the most basic principles of prepper OPSEC is to hide your preparations, so that others don’t get an idea of what you’re doing. While that is a good idea, it’s not always easy to accomplish. Some things are easy to hide, while others, well, they’re more like trying to hide an elephant in your garden.

Such is the case with water. It’s not that water in and of itself is so hard to hide, but that you need so much of it. That’s what makes it hard to hide. If all you had to do was hide 100 gallons or so, then you could put it in your basement and be done with it. But you need a whole lot more water than that, which means that you’ve got a problem finding a place to put it.

How Much Water Do You Need?

Let’s start out by looking at how much water you really need to survive. The average American family of four goes through roughly 400 gallons of water per day. Of course, that’s in normal times, not in times of crisis. When survival is the key, you can get by on a whole lot less water than what you normally use; especially when you consider that a lot of the water we normally use just goes down the drain.

But that doesn’t mean that you can get by on one gallon of water per person per day, as many survival instructors are saying. Actually, what they are saying is that one gallon of purified water is enough for drinking and cooking. That’s not the same as saying that’s enough to live on for the day.

You also need water for washing your body, your dishes and your clothes. If you are using your toilet, you’re going to have to flush it once in a while. Finally, you need water to keep your vegetable garden growing, even if you let the flowers and grass wither.

So, what’s the actual figure for the amount of water you need? That depends a lot on how well you learn to conserve water. But the actual figure is closer to five gallons per person per day, not just one. Even that’s going to be a challenge.

There are lots of things you and I can do to conserve water in an emergency. To start with, during a crisis we wouldn’t be using our appliances, which are very wasteful of water. Washing dishes and clothes would be by hand, which can be done with very little water, if you are careful.

If you put your clothes in the bottom of the shower while you’re bathing, you can get a head start on them as well, reducing the amount of water you’ll have to use to wash them. Once your bath is over, put the wet clothes in the bucket, until you’re ready to wash them out.

The water you use for washing is called grey water. It can also be used for watering your garden, saving yourself a bit more water. I have a lot of the grey water from my house going right to the garden or the trees, making it possible for us to save on water.

Where to Hide Your Water

No matter how well you conserve water, you’re still going to need quite a bit of it. So, you’ve got to find a place to hide it. A lot of people talk about filling milk jugs with water and hiding them under the bed. That’s fine for your drinking water, but it won’t allow you to stock enough water for all your needs.

It’s actually easier to stock your water in larger containers, rather than smaller ones. Small containers tend to waste space, specifically the space between the containers themselves. So, if you store water in 55 gallon drums, you can get more water into the available space. You also save money.

If you store it in 150 gallon chemical storage tanks, you can do even better. I use 750 liter (198 gallon) tanks, as they are five feet in diameter, making them the largest ones that I can fit in my pickup truck.

The question then is, where do you put those tanks? I have one in my garage and one on my back porch. But between the two of them, that only accounts for 400 gallons. If we’re actually going to need five gallons of water per person per day, then that’s only enough water for 20 days. However, if we’re just talking drinking water, it’s enough water for 100 days.

You can see the problem, can’t you? If you have a basement (I don’t) you can store more water down there. Maybe you can’t fit 200 gallon tanks down there, but you can fit 55 gallon drums.

The easiest way of storing water, without raising any questions, is to store it in plain sight. What do I mean by that? Well, let’s start with my 200 gallon water tank of the back porch. I’ve put a screen around it to hide it from casual view, but my neighbors know it’s there. So, I told them that it’s a water tank for my vegetable garden. The tank allows me to add chemicals to the water, fertilizing the plants at the same time I’m watering them.

In this way, my neighbors don’t think anything of a water tank being on my back yard. In fact, I’d venture to guess that they’ve even forgotten it’s there. The explanation I gave made sense, so that it was no longer a curiosity. They’ve seen me filling it and they’ve seen me emptying it to water my garden. So, as far as they’re concerned, I’m doing exactly what I said. They don’t have to know that I’m emptying and filling it to keep the water fresh.

Another way of doing just about the same thing is to put in a rainwater collection system. Many preppers are already doing this, with some attaching as many as four barrels to their system. That’s 220 gallons of water. Not only that, but it’s a renewable resource.

However, my favorite way of storing water in plain sight is to use an above ground swimming pool. You can buy these fairly inexpensively at your local big box store. They usually come with some sort of rudimentary filtering system, which you can easily improve.

Like a larger pool, they need to have the water tested and chlorinated regularly, in order to keep it clean. But, while your kids are using it to cool off in the summer, it’s providing your family with a fairly large emergency water supply.

That’s twice what my two tanks hold together, providing enough drinking water for a family of four for 200 days or enough water at five gallons per person per day for 40 days. A 20 foot diameter pool jumps the total water volume up to 1,256 gallons. That’s enough water for the family to use for 64 days, or over 300 days of drinking.

Of course, your neighbors will know that you have a swimming pool and may even come around asking for water when times get bad, just like they’ll come around asking for food. You’ll have to figure out how you are going to handle that, but I would give them a minimal quantity of water, say a gallon (in their own container) and tell them where they can get water from ponds, streams and canals in the area. You might even give them some guidance on how to purify that water, helping them to increase their chances of survival.

12 Tips from a British Army Sniper

How To Turn Salt Water Into Drinking Water