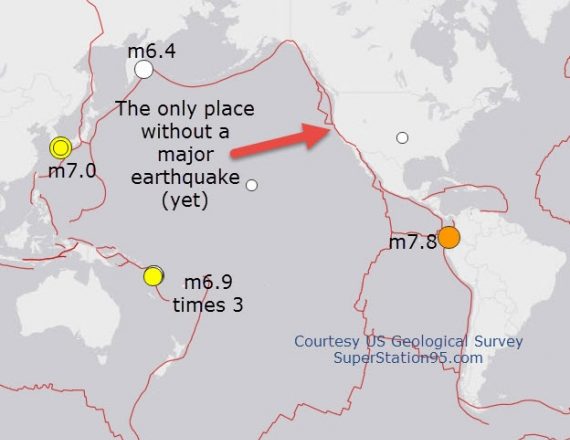 For the past two weeks, the Pacific Tectonic Plate has been smashing Asia and South America with large earthquakes.  Is the USA next? It could be.

The image above, from the US Geological Survey, shows “Significant” earthquakes for the past 30 days.  Notice where one hasn’t struck yet?  The US west coast.

The major activity began in Russia with a Magnitude 6.4

That seemed to have triggered the Pacific Tectonic Plate to shift to the south and smash into Vanuatu, a small island chain in the South Pacific.  They got hit with a Magnitude 6.9

Three days later, Vanuatu got it again, with a Magnitude 6.7

The very next day, Vanuatu got slammed yet a THIRD time, also a Magnitude 6.7

It took seven days for the Pacific Tectonic Plate to move and when it did, it seems to have moved to the north, northwest, because that’s when Japan started getting hit – and hit hard.  It started with a Magnitude 6.2

Step by step how to make a one year Stockpile….Read more:

Two and a half HOURS later, another hit in Japan, this one a Magnitude 6.0

Six HOURS after that, it got worse, Japan got suffered a Magnitude 6.4

Eighteen HOURS after that, things got MUCH worse, when a Magnitude 7.0 struck

Twenty MINUTES after that, a Magnitude 5.7 hit again

It was this final 7.0 and 5.7 that seem to have hurled the Pacific Tectonic Plate to the east because one day later, Ecuador got utterly smashed by a whopping Magnitude 7.8 (eight times worse than Japan)

At this point, if Plate Tectonics is any kind of science at all, one would think that it would be a guessing game as to whether or not the plate would move back toward Japan.  But something else took place that gives a hint of what the plate is doing. The Colima Volcano in Mexico began spewing steam and smoke.  That means something underground is putting pressure on the chamber beneath the volcano.  Given the location of the Colima Volcano, it isn’t rocket science to conclude that the pressure is coming from the Pacific Tectonic Plate. 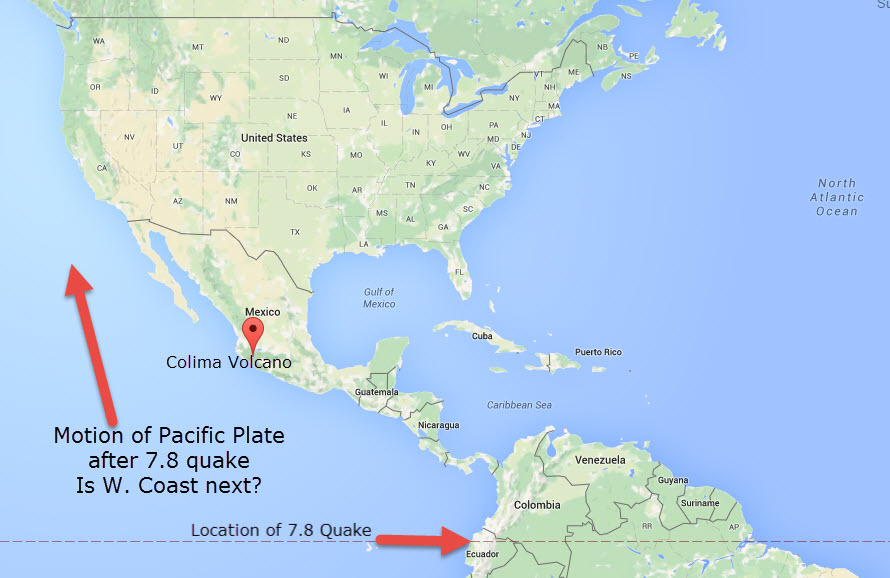 Given the facts as shown above, it seems appropriate to alert folks along the West Coast of North America, specifically California, Oregon and Washington, that they may be in for a bumpy ride over the next few days to a week.

NO ONE CAN ACCURATELY PREDICT AN EARTHQUAKE AND WE ARE NOT DOING THAT!

We are merely applying the facts of what has taken place, with a little common sense and speculating about what MIGHT be coming next.  It is not certain.

Don’t go off, half-cocked, and start calling authorities about a coming earthquake because  the simple fact is, we DO NOT KNOW if one is actually coming.  And there’s nothing the authorities could do about it anyway!

Just bear in mind what has taken place around the world recently and realize that the very same Tectonic Plate that caused all the trouble in Japan and Ecuador, also connects with the west coast of the USA, and folks should be prepared in the event of a large earthquake within the next few days to a week.

The Shaking Continues: The Most Dangerous Volcano In Mexico Has Erupted In Spectacular Fashion