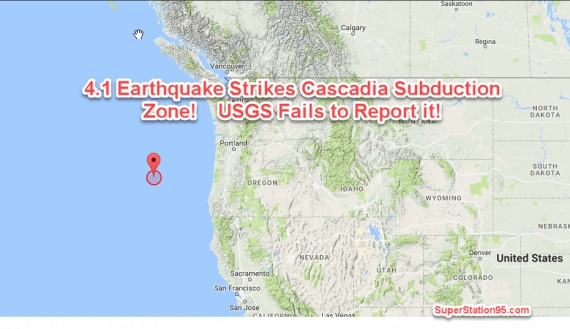 A magnitude 4.1 earthquake struck in the dangerous Cascadia Subduction Zone (CSZ) off the coast of Oregon as follows:

The initial report of this incident was issued by Natural Resources Canada, the Canadian government’s earthquake reporting entity, even though the quake took place off the coast of Oregon.

For an unknown reason, the United States Geological Survey (USGS), which Americans fund with hundreds of millions of dollars per year, FAILED to report this dangerous occurrence which took place in the single most dangerous earthquake zone in America.

Worse, the USGS, ignored several “forecasts” of pending earthquakes in that region, which were issued by several experts! It is believed the USGS and its local partner, the Pacific Northwest Seismic Network, are omitting the existence of the quake to ignore the new science of earthquake forecasting – which USGS says is “impossible.” 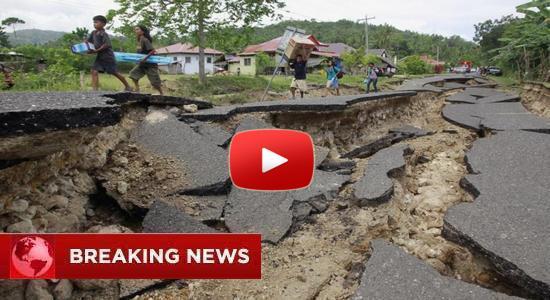 Here is the link to Natural Resources Canada which reports the Cascadia Subduction Zone earthquake:

Here is a screenshot of the Canadian report about the CSZ Earthquake:

If you utilize the Latitude and Longitude Coordinates shown in the Canadian Report, and enter them into Google, they will show you WHERE the quake occurred:

One of the experts who forecast this earthquake has produced a video documenting the quake and the apparent cover-up by the USGS.  The video appears below:

Why didn’t the USGS report this earthquake?

Is this earthquake a “foreshock” and a signal of a much larger earthquake to come?

Why isn’t the mass media reporting this?  Why are the people of Oregon being left completely unaware?

We live in a world and age where disaster can strike almost anytime.Imagine being without electricity for days,months or even years.Add to that the lack of navigation tools,water,food,communication channels or garbage collection.Whether is a nuclear war or the apocalypse ,it is imperative to learn from our ancestors how to survive.The Lost Ways is a unique survival course that helps you to re-discover and master the old-fashioned skills our forefathers have used to survive a few centuries ago.Watch the video below and learn more: