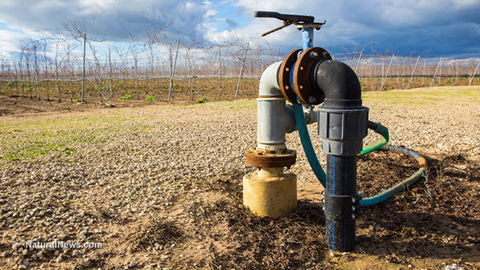 The water crisis in California is reaching epic proportions.

And it’s going to cost everyone, big time.

After a sustained drought, NASA has reported that the state has less than one year of water reserves remaining, with no back up plan if things go wrong.

Now, there is so much demand for water in Southern Californian cities, that many farmers are opting to sell their water rights to urban dwellers – not just at a premium, but at an unbelievable and unprecedented rate.

CBS News profiled some rice farmers with historic rights to the Yuba River who are being offered so much for water, they have decided to forego planting their crops altogether and sell the new “cash crop” – liquid gold.

The going rate has jumped from the $50 per foot acre, which many farmers have been willing to pay, to an astounding $700 per foot acre.

Many fields will stay dry because farmers will be doing what was once considered unthinkable: selling their water to Southern California. He and his fellow growers have agreed to sell 20 percent of their allotment to Los Angeles’s Metropolitan Water District as it desperately searches to add to its dwindling supply. This new price means growers will earn a lot more money on the fields they don’t plant, making water itself the real cash crop in California.

Fourth generation rice farmer Charlie Matthews knows that the soft approach is the early one, and fears that cities will use any means at their disposal to steal or take his water if he isn’t cooperative. The crisis is that big:

That desperation will express itself in terms of draconian water rules for urbanites – who have already been reporting each other for using too much water on their lawns – and higher costs… much higher costs. According to these farmers, there is virtually no upper limit on what people will pay for water when they really need it.

Agriculture, it appears, will go elsewhere, with market demand for water in a crisis enough to trump just about everything. As SHTF has already reported, the drought could impact the food supply and create shortages or extreme prices.

According to Matthews, water will sell at any price:

“They have to pay whatever the last price, the highest price, people will pay,” Mathews said.

There is no short term plan for recovering from California’s water crisis, and the stakes will only get higher until a solution is found.