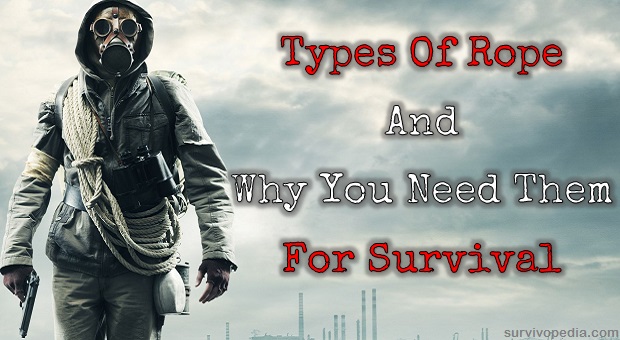 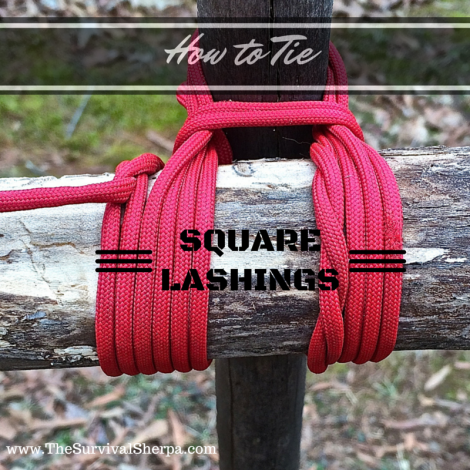 With spring near, you’re hoping for a cure to cabin fever. Maybe a camping trip to your favorite spot is in order. Time to refresh your camp craft skills and awe your camping buddies with your rope and stick tying skills!

Lashing isn’t just for Boy Scouts and pirates. This skill comes in handy for gardeners, homesteaders, bushcrafters, and for that unlikely event when you need to build a raft to escape a cannibal infested island.

Square lashing is used when securing spars (poles) that cross between 45º to 90º angles. It’s a super strong lashing still used in many parts of the world to build bamboo scaffolding. You probably won’t have the need for a 5 story construction platform, but you may want to build a few camp comforts like a table or wash station.
Lashing Lingo

These are commonly used terms when describing the art of lashing stuff together.

Wrap: A series of turns of cordage around two or more spars (poles) you’re binding together.

Frap: Turns of cordage on top and perpendicular to the previous wraps. Fraps go between the spars to pull the joint tight.

Spars: Poles to be lashed together.

Tag End: The short end of your cordage when tying knots and lashings. AKA ~ running end.

Working End: The long end of your cordage when tying knots and lashings. AKA ~ standing end.

Tongue Lashing: What you’ll receive from camping buddies if your lazy lashings on camp furniture fail. Take your time, use good materials, and tie it right.
Material List

Cordage: I use #36 Tarred Mariner’s Line (bank line) for 95% of lashing projects. Other options in order of my preference are:

Natural fiber rope/twine – whipping should be applied to the ends to prevent unraveling.
Paracord – I use red paracord in this demonstration as a visual aide. Melt the ends to stop fraying. It is my least favorite cordage for lashing.

Cutting Tool: Scissors work… but not the most manly cutting tool at camp.
Tie One On

For practice, consider building a lashing station in the backyard. Set two posts in the ground. Lash a cross spar between the two posts about waist height. Stand another spar against the horizontal cross spar to practice on. 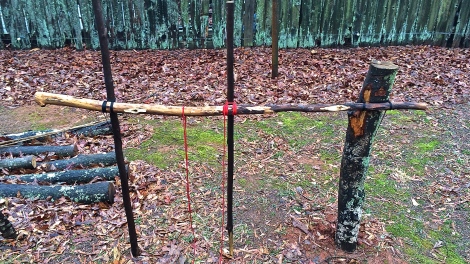 A rain-soaked lashing station in the backyard

As a math teacher, here’s a simple equation to prevent cutting cordage too short or too long.

Y represents the total length of cordage needed. X is the variable representing the combined diameter of the two spars being lashed together. The number in front of the X, also called the coefficient (you didn’t really want to know that), represents 3 feet. Let’s say the combined diameter of the two spars is 5 inches. Plug in 5 for x and multiply by 3 feet. You’ll need 15 feet of cordage.

Take one end of your cordage and secure it to the vertical spar using either a clove hitch or timber hitch. The starting knot will be beneath the horizontal cross spar. These two knots are easy to tie and untie without resorting to cutting with those cool camp scissors. 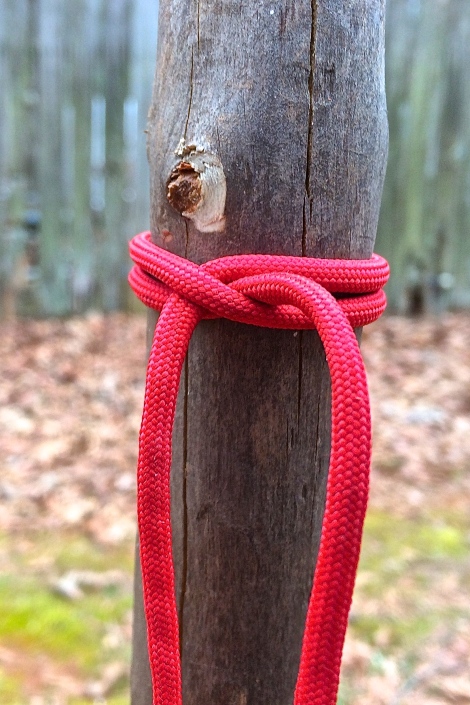 A clove hitch is basically two half hitches put together.

I prefer to start lashings with a timber hitch (my video below shows how to tie a quick one). For this blog post, I used a clove hitch with the red paracord. If you choose a clove hitch, leave a long tag end (3 to 6 inches) that will be twisted around the working end of the cordage as an added security measure on the knot. 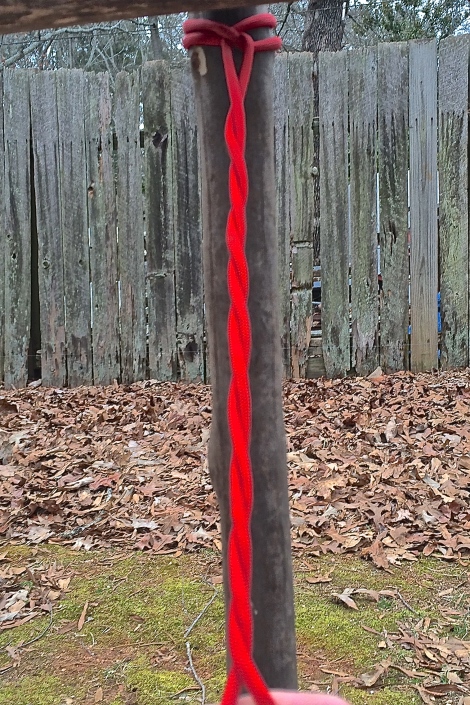 This completes your first wrapping. The wraps should cross the spars at a 90º angle… this angle gives the Square Lashing its name. 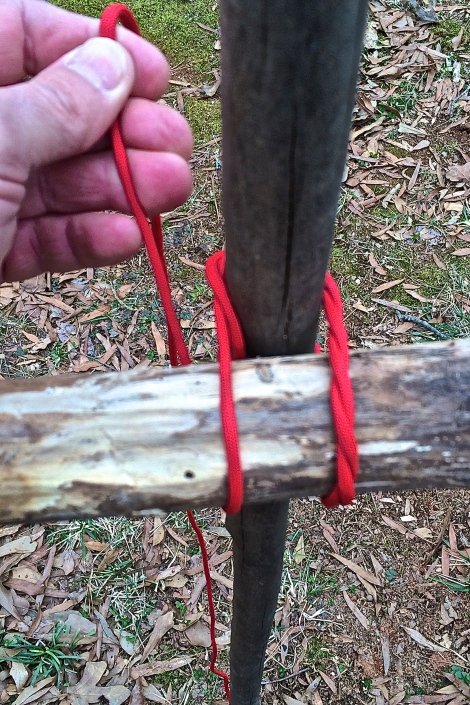 This is the pattern for the wraps. Note: The working end of the cordage is in my left hand… only because my camera is in my right hand.

Continue this wrapping pattern until you have 3 or 4 complete wraps. I don’t count the first twisted wrap. It’s important that you keep the wraps as tight and parallel to one another as possible during the process. This not only aids the appearance of your lashing but also functions to make the joint stronger with less friction on the cordage.

Note: Keeping slick paracord tight can be a challenge. Wrap a toggle stick in the working end of your rope to help pull the wraps and fraps tight. 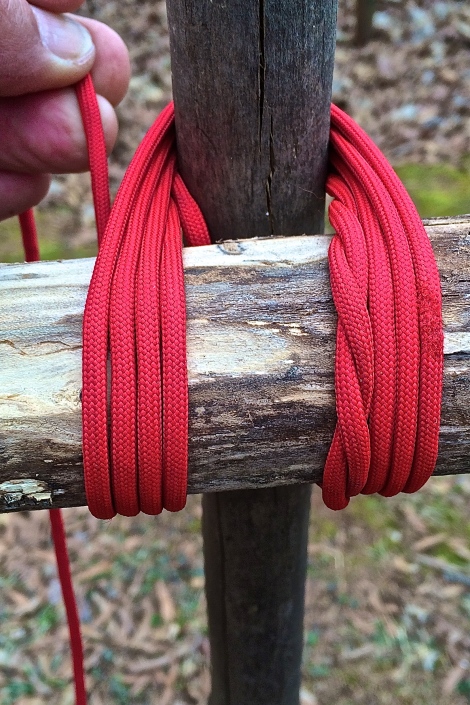 Wraps completed and ready for frapping

Take the working end of the cordage between the spars and over the previous wraps to create one frapping. Apply at least two fraps between the spars. Cinch the frapping tight with a toggle. Tarred bank line bites and holds on itself very well. That’s one reason it’s my goto cordage. 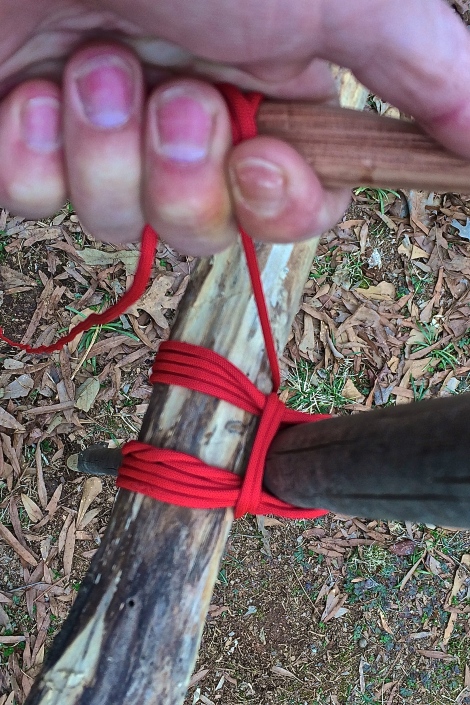 With the wraps and fraps tight, you’re ready to terminate the lashing. Tie a clove hitch on the horizontal cross spar next to the wrapping. An easy shortcut is to tie two half hitches to form a clove hitch. This makes terminating slippery cordage much easier. Just be sure to wiggle and tighten each half hitch. For added security, tie a third half hitch beside the clove hitch. 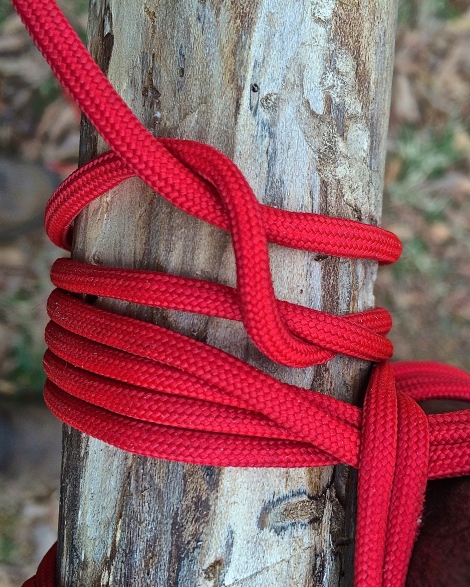 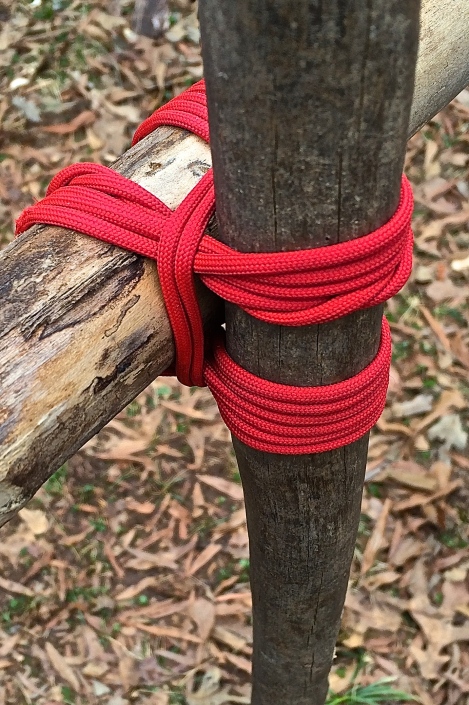 The previous half hitches forming a clove hitch

If you need to lash a tripod, check out this video:

P.P.S – If you find value in our blog, Dirt Road Girl and I would appreciate your vote on Top Prepper Sites! You can vote daily by clicking here or on the image below. Check out all the other value-adding sites while you’re there…

Two Things You Must Have To Survive In The Wilderness

Going off the grid: Why more people are choosing to live life unplugged