Good food makes outdoor adventures worthwhile. Long days in the woods end with boiling water over a propane burner which is poured into a mylar bag of freeze-dried food for some outdoor enthusiasts. Those add-water-meals have their place. But for a traditional woodsman’s basecamp, that simply won’t do. Nope. Up your cooking game with what Steve Watts called “honest grub cooked over an open fire.”

There are many campfire cooking arrangements in old journals from the days of Classic Camping. Today, I want to share with you one I came across in an old Scout handbook. The time and energy needed to build one is best reserved for a permanent basecamp or your backyard.

The T-shaped configuration of this pit allows you to grill, boil, and bake. Add a waugan stick, carved pot hangers, and a bipod suspension system to create a very functional and classic cook system. Here’s what you’ll need to build your own…

You’ll dig two holes. Dig the first hole about 18 inches square and 5-6 inches deep. My preferred digging tool is my military trenching tool. Adjust the shovel end to a 90 degree angle and swing it like a pickax. You’ll encounter rocks and roots. This tool will sever roots and split rocks.

As you excavate the hole, pile the dirt past where the next hole will be dug. Dirt from both holes will be removed to form an angled earthen berm. 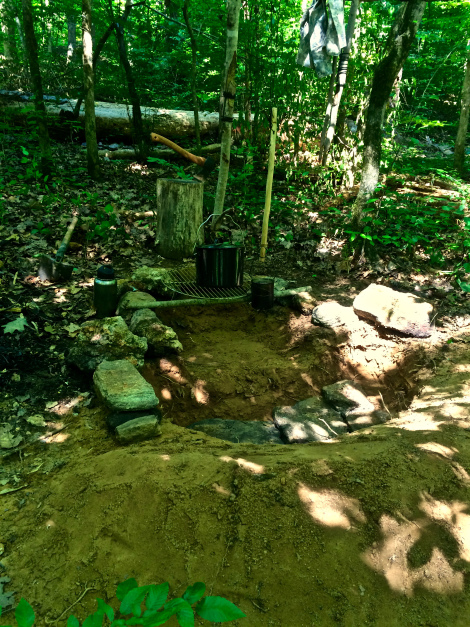 Outline the deeper hole as a rectangle 12 inches by 24 inches. Dig this hole to approximately 12 inches deep. As you pile dirt on the berm, tamp it periodically with your trenching tool or boot.

With the multi-level pit dugout, it’s time to add flat stones to the bottom of the deeper pit. The rocks will add thermal mass which translates to more radiant heat. Do NOT use rocks soaked in water. If no dry stones are available, go without. The pit will still be functional. Hot river rocks can explode and send sharp shards flying.

If you have plenty of rocks, line the outer rim of the upper cooking surface. Again, this isn’t necessary. If stones are limited, cut two logs and lay them parallel to one another on the outside edges of the pit. Green saplings can be laid over the logs/rocks to form a grilling grate. If you have a metal grill grate at your basecamp, use it. Cut one sapling to support one end of your grate while the other end rests on the rocks. 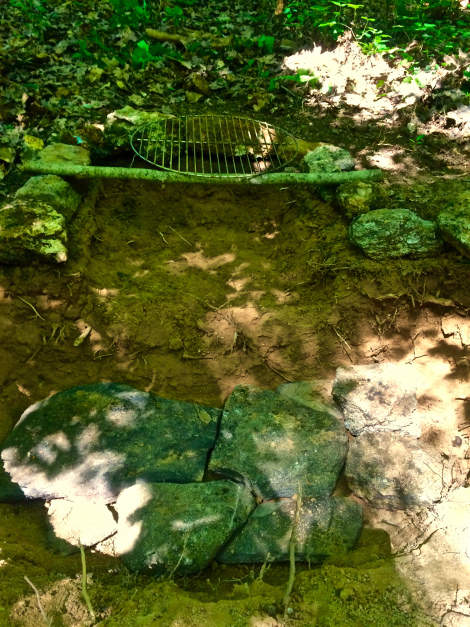 A cheap metal grill grate is handy for basecamp

Use your fire craft skills and build a fire in the upper hole. You want good seasoned (dead standing) hardwood for your fire to produce abundant coals for cooking. In my location, hardwood is abundant. However, folks have cooked over lesser wood and even brush when that was the only thing available. In other words, use what you have available.

A blown over Red Oak near my shelter has provided firewood at basecamp for over two years. I cut two limbs about 5 foot long and 6 inches in diameter and hauled them back to camp. My experience has been that splitting the long logs into quarters first saves me energy and sawing time. Place the full-length quartered wood on your camp sawbuck and cut to your desired length. I simply saw them in half and split them down further to kindling size with my hatchet. Learn to safely handle axes, saws, and knives if you cook much over an open fire. 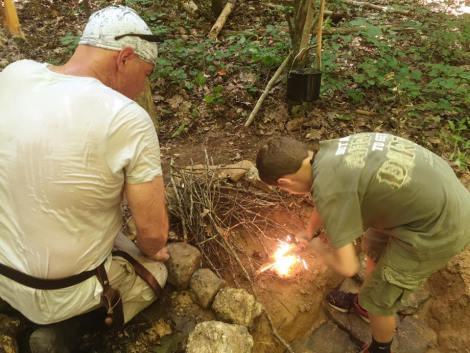 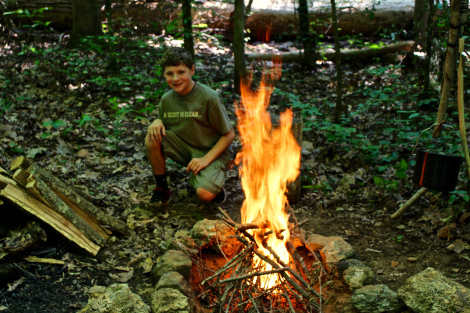 I had the pleasure of having Evan, a local Boy Scout, and his dad, Mike get in some dirt time at basecamp. Evan started this fire with a ferro rod and cedar bark. Nicely done, bud!

Unless you’ve burned a good amount of wood in the upper pit, you won’t have enough coals to rake into the lower pit for baking. We pulled some coals into the lower pit and fed it to make a separate fire below. As the top fire  began to burn down, we kept feeding the lower fire. Timing is important if you plan to cook several items.

We dipped water from the creek in the basecamp bush pot and suspended it from a pot hook over the lower fire. Once boiling, we added rice. Somehow I had left my Old Bay seasoning at home. This meant bland rice unless we sopped it in the steak juice, which happened. 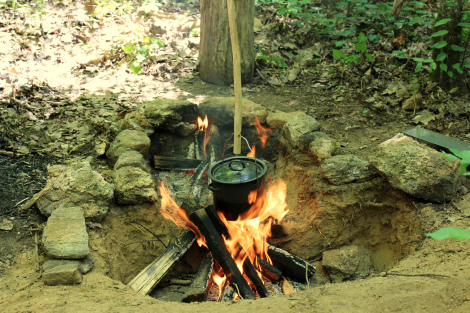 Next up… corn muffins. In my canteen cup, I added water and the dry ingredients and mixed them together well. It appeared a bit soupy, but we poured the mix into foil cupcake sleeves anyway. The three-quarters full sleeves were placed into the make-shift reflector oven – a used, but clean, all stainless steel drywall finishing pan. The reflector oven was then placed on a level spot at the end of the lower pit near the radiant fire. 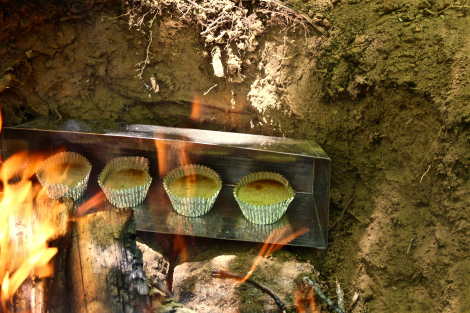 The muffins browned on the side away from the flames first

After 5 minutes or so after setting the oven, two juicy rib eye steaks were pulled from the cooling water of the creek and placed on the grill top. I like my steak medium-rare. Evan prefers well-done. Mike said he just likes steak. And, yes, we cook to order at basecamp!

To my surprise, the soupy corn muffin mix firmed up and began to rise within 5 minutes or so of being in the pit. This was due to fire management. To keep the fire hot we added wood before it needed wood. To better explain, adding wood to a low burning fire means you’re playing catch-up with the temperature aspect of baking. Even seasoned wood takes some time to drive moisture out and reach combustion temperature. However, that’s where creating surface area (kindling) with your ax can fix the situation. The wetter the wood, the longer it will take to reach that critical temperature and produce the desired radiant heat towards the reflector oven.

The muffins browned on the side away from the flames

To gauge the heat entering your reflector oven, place you palm just in front of the oven and count to 5 quickly. If you reach 5 before nerves in the back of your hand tell your brain to jerk out of the heat, you’re at a good baking temperature (around 350 F). Any lower in the 5-count and the temperature in your oven goes up.

If you need to break camp, put out the fire in both pits. I use a 5 gallon bucket of water to throughly soak the fire until all smoke stops. Check under fire ring rocks for hidden embers that may still be alive. Be aware that pouring water on hot stones in the bottom pit will create steam and actually boil the water. There’s always the chance of flying shards of rock when cold water hits hot stone. Take precautions. 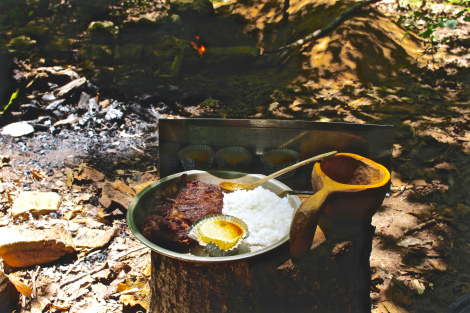 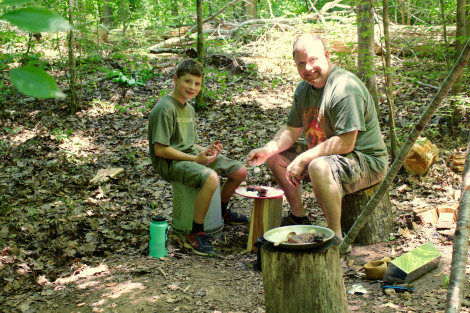 Nothing tastes so satisfying as sharing honest grub cooked over a campfire with friends.

The Fall & Winter Prepper Checklist: 9 Things To Get Your Home Prepped for Disasters

23 Things You Can Forage For From April To June