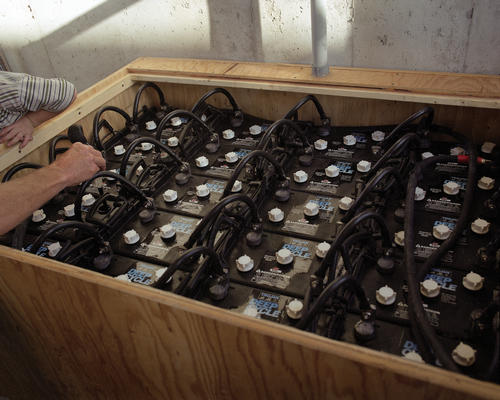 When most folks first consider living off grid, they often find themselves in a little over their heads. Self sufficiency is not something to take lightly, and it requires an extensive knowledge base in multiple fields. You have to take responsibility for services that are far easier to outsource in the city, like food production, energy generation, water supplies, and construction. Once you take a step outside of that system, you’re on your own, and you’ll have plenty of challenges ahead of you. If there’s one thing that will make your life easier, it’s a resilient electrical system for your home. And nothing will make your system more convenient or more energy efficient, than a good set of batteries. 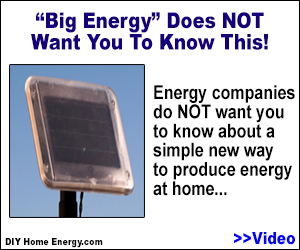 Unfortunately, not all batteries are made equal, and the subject of rechargeable batteries can be a little overwhelming at first. Buying the right kind of cell to store your energy is one of the most important decisions you’ll make, especially if you plan on relying on solar energy. Many people make the mistake of thinking they can just hook up some old car batteries to their solar panels and call it day. In reality, if you want the benefits of electricity in your home, you’d better have a basic working knowledge of electricity, and the right batteries for the job.

That means you’ll most likely need a deep cycle battery. Unlike your car battery, these are designed to discharge large amounts of energy without being damaged , and can be recharged many times without any problems. There are three types of deep cycle batteries that are the most popular for people trying to get off the grid. These include :

Flooded batteries are the more traditional choice for most people, and have been around a lot longer than AGM or Gel batteries. They’re significantly cheaper than modern batteries, and can discharge deeper. The only problem is that they need regular maintenance. You’ll periodically have to add distilled water to the battery to keep it running, and they must be stored upright to prevent spilling. Flooded Cells emit corrosive gases so they should be kept in a well ventilated environment, and away from sensitive electronics. Despite these issues, they may be the best choice for your budget and situation. As you’ll soon see, modern isn’t always better.

Along with AGM, Gel batteries are what’s known as “maintenance free”. They’re sealed in a way that doesn’t required you to continuously add water to them. Rather than a liquid acid, the contents of the battery have the consistency of jello, so they will never leak, and there is very little gassing. Like wet cells, they are built for very deep discharges, but are usually the most expensive batteries on the market. The cost will pay off in the long run though. When you look at the price per discharge/recharge cycle, it ends up being the cheaper option for long term daily use.

While very similar to Gel cells, AGM batteries have their own pro’s and cons. They’re usually priced between Gel cells and Wet cells, and work better in colder climates than Gel batteries. They’re also maintenance free, with no leakage or gassing, and don’t need to be stored or used in an upright position. The main drawback, is that they are better suited for lower wattage appliances, whereas Gel cells can have very high discharge rates without being damaged. Typically you don’t want draw more than 50 percent of its stored electricity, or it will reduce its lifespan by a large margin.

I would say that, at least initially, most people should purchase a flooded cell battery first. All deep cycle batteries are rather sensitive, and can be easily damaged if they aren’t properly charged or maintained. The difference with wet cells, is your ability to add water to them. While AGM’s and Gel Cells are known as “Maintenance Free” they should also be known as “Maintenance Proof” because there’s no way to open them up and add more fluids. So wet cells have a better ‘margin of error’ so to speak. If you over charge them to the point of cooking off some of its fluids, it’s not the end of the world. You can just add more fluid. Or if you accidentally damage the battery beyond all repair, at least you didn’t spend too much money on it. Make your mistakes on wet cells before moving onto the maintenance free batteries.

You’ll also have to consider the size of the battery you want. The capacity is always measured in amp-hours, and they either come in 6 or 12 volts. Since you’ll want to avoid discharging more than 50 percent of your battery, you’ll have to do the math on how much power you expect to generate and use.

Plus, different batteries will be capable of higher discharge rates. This will be crucial when you get around to hooking your appliances up to your battery, because the wattage rating that’s listed on most appliances is a little misleading. For instance, say you wanted to run an 800 watt coffee maker. When you first turn it on, it’s actually going to run at around 1000 or 1200 watts for a few seconds before it settles into 800 watts. You’ll find the same thing with pretty much all appliances. So if you bought a battery that was only capable of providing the listed wattage on your appliances, you’ll have trouble getting them to start up.

Along with more Amp-hours (Ah), comes more weight. Deep cycle batteries tend to be outrageously heavy. A 100 Ah cell may be the size of an ordinary tool box, but weigh over 60 lbs. If weight is an issue for you, you can buy many smaller batteries and connect them in parallel. This way you can maintain the same voltage, but increase your storage capacity. It should look something like this: 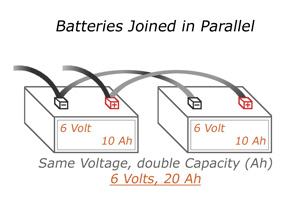 When it comes to charging the batteries, it would be wise to get a smart charger of some kind. Without that technology, it’s very easy to overcharge your batteries and damage them. And once your batteries are ready to be used, you’ll need an inverter to convert the DC power of the battery into the AC power of your appliances. As I mentioned before, since the wattage of your appliance can vary significantly, you’ll need to buy an inverter that’s capable handling the peak wattage of all your appliances.

Finally, if you don’t have a multi-meter you should definitely get one. They’re not very expensive, and they can be handy in many different applications. In this case, you can use it to measure how much electricity your battery is currently storing. 12 volts is actually a bit of a misnomer when it comes to car batteries and deep cycle cells. When a battery is full, it will actually provide 12.6, or even upwards of 13 volts. A completely drained battery will give out around 10.5 volts before it gives up the ghost. It’s kind of like having a bucket full of water and poking a hole in the bottom. The water will come out with less and less force as the bucket empties itself.

Just remember, when you go out to buy your battery, you need something you can rely on above all else. Do your research on the kind of environment you plan on living in, and study up on the different battery options out there. It’s a little bit of a daunting subject at first, but well worth it if you plan on going off the grid.