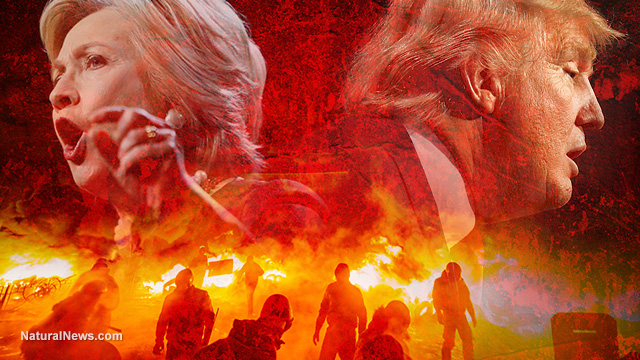 You didn’t really think the criminal cabal of globalists was going to idly stand by and let the voters elect an anti-establishment candidate, did you? According to the latest insider buzz I’m hearing, a staged event of historic magnitude is set to take place in the next six days that will end the populist rise of Donald Trump and allow totalitarian globalists to seize control of America through political means. I post this article in the hopes that perhaps revealing these plans ahead of time may cause them to be put on hold.

All the buzz on this centers around a number of unverifiable claims that are now circulating among various bloggers, journalists and video commentators in the indy media. For the record, I do not endorse any certainty of these ideas, but for the sake of making sure this is all out in the open, I will mention that these theories center around claims that either Clinton will be assassinated, Trump will be assassinated, they will BOTH be assassinated, or the more bizarre theory that Clinton is already dead and will still be assassinated anyway in a staged event to blame “Second Amendment people” and reset the entire election.

While I can’t validate any of these claims (and therefore don’t endorse them), what rings true about the overall tone in such whispers is the idea that the globalists will stop at nothing to control the outcome of this election in any way possible. There is absolutely no question that, in the minds of the globalist totalitarians, the lives of Hillary Clinton, Donald Trump or any number of innocent bystanders are utterly meaningless to them. If they have to murder a few people to stay in power, that is well within their psychological window of acceptable behavior in order to achieve their political goal of total domination.

Behind the scenes of the indy media, everybody is talking quite openly about these scenarios, and some are convinced that Hillary Clinton actually died on 9/11 and has been impersonated (or “green screened”) ever since. Others say both Clinton and Trump will be assassinated simultaneously, possibly at the upcoming debate on the 26th. Dave Hodges at The Commonsense Show has posted an article that gives you a flavor of that line of concern. All News Pipeline also reflects the concerns with an article that warns, “Hold On To Your Seats! – Something Shocking Set To Rock Presidential Race.” Notably, the most recent Alex Jones “epic rant” gives you a sense of the almost manic frustration and anger that’s boiling over (fast forward to 7:00 to really witness Jones at his most “epic”).

The globalists now see Hillary Clinton as a liability, whose death could be exploited for political gain

Regardless of what any of us believe about the whispers or rumors, what’s clear at this point is that Hillary Clinton’s horrifically poor performance and collapsing health has made her an obvious liability to the globalist agenda. It is now conceivable that they are figuring out how to get rid of her in a way that can serve the theatrics necessary to radically change the election narrative.

From the point of view of globalists, eliminating Clinton through a carefully planned “execution” that can be blamed on Trump supporters achieves two important goals at once: 1) It allows the democrats to replace her with a candidate who doesn’t suck. 2) It allows the media to maliciously blame Trump — based on his “Second Amendment people” comment — and possibly swing some support back into the democrat camp. To pull this off, right now they would need to be brainwashing a “lone gunman” and fabricating an entire back story of social media posts, a manifesto and other materials that can be cited by CNN to link the gunman to Trump. (REDDIT users, be ready to start vetting all this if an “assassination” actually takes place…)

Is Trump also a target? Eliminating only Trump without simultaneously dispatching Clinton does not achieve this goal as neatly for the globalists, because the assassination of Trump alone would almost certainly set off a nationwide armed revolt leading to chaos or even civil war… and that’s not what the globalists want right now… they want “controlled peace,” meaning an orderly but obedient society where no one is allowed to speak any words at all that challenge the consensus reality of the controllers (hence the need for politically correct speech controls). See my recent mini-documentary

However, assassinating BOTH candidates at the same time — conceivably with a bomb or chemical weapon at an upcoming debate — would in fact allow globalists to replace both parties’ nominees with obedient globalist puppets (Jeb Bush on the right, Joe Biden on the left). From the point of view of the globalists, a simultaneous assassination of both Clinton and Trump achieves the best possible outcome for their totalitarian agenda.

The People only “win” in all this if both candidates remain alive and healthy long enough for Clinton to be defeated on election day (which now seems a near certainty).

It is important for a nation to witness the voter rejection of a criminal globalist like Hillary Clinton. If she is assassinated or dies before election day, the people are denied their opportunity to properly reject her failed ideas, wholly dishonest campaign lies and horrific record of political failures.

Furthermore, the beginning of political healing in America can only commence when the population has the opportunity to properly reject the criminality of the political class and usher in a new candidate who does not serve as an obedient disciple of the globalists. In a very real sense, in other words, the healing of America must begin with the democratic election of Donald Trump and the outright rejection of the Obama / Clinton era of corruption and criminality.

This is precisely why the globalists do not want to allow democratic elections to take place in America, and it’s why they are willing to do almost anything to stop them. At all costs, they must stop the People from being able to freely elect Donald Trump, and they are willing to kill anyone necessary to achieve that goal, including killing both Clinton and Trump.

How you can help save America and stop the globalists

Fortunately, you and I are not helpless in this situation. It turns out that the humble cell phone camera is right now our greatest weapon against the globalists and their insidious attempts to seize the outcome of this election.

Consider the fact that it was a personal cell phone that captured Hillary Clinton’s “seizure moment” on 9/11 when she collapsed on the sidewalk and was heaved into a van like a sack of rice. In one moment, a private citizen with a cell phone camera changed the course of history.

Now, it’s more important than ever that you keep your cell phone cameras rolling at every political event. We the People must capture, upload and share important videos that document the false flag attacks, the green screen deceptions, the fakery and lies of the entire leftist political regime — including CNN fakery and staged theatrics (if it wasn’t for green screens and teleprompters, CNN would have nothing to report at all). Through the power of citizen journalism, We the People actually have a legitimate shot at halting the false flag operations and even stopping the assassinations of Clinton and Trump.

We are now living in an era of individual empowerment, where individuals now have the power to challenge the lies and propaganda of every totalitarian regime that exists on our planet. From Saudi Arabia to North Korea and even the United States, citizens with video recording devices can now document the deceptions and expose the lies of the tyrants.

Use your camera first, and then your rifle only as a last resort

We are living in a time of global revolution and revolt, and the power of the camera is the single most important tool that now exists for freedom (with the power of the rifle a close second). In fact, I dare say that a “Citizen” is a person who carries both a camera and a rifle and is willing to use her camera first — and her rifle second — in the defense of her nation and her human rights.

Be steady, my friends, for if the whispers circulating across the indy media turn out to be true, you and I are all about to be thrust into unprecedented turmoil and possibly even an armed uprising against the totalitarians who are trying to destroy democracy (and end any possibility of a Trump presidency).

Right now, based on what I’m hearing, if we actually make it to election day with both candidates still alive, I’m going to count my blessings and thank God for the opportunity to take our country back at the voting booths. It is possible, of course, that no assassinations occur at all. It’s possible that our public discussion of these false flag operations may prevent them from taking place. It’s even possible that the elections won’t be hacked by the democrats to steal the results. But I’m sure not betting my future on all that. Right now, in my view, we are looking at better-than-even odds of an event taking place that eliminates one or both candidates from the race in the next 30 days.

From there, we enter uncharted territory with events unfolding that, throughout history, have sometimes formed new nations or at other times ended existing nations. With America now on the brink — and states like Texas nearly ready to secede — the events we are about to witness will radically reshape history. If you are not yet stocked up with beans, band-aids and bullets, you are delusional. 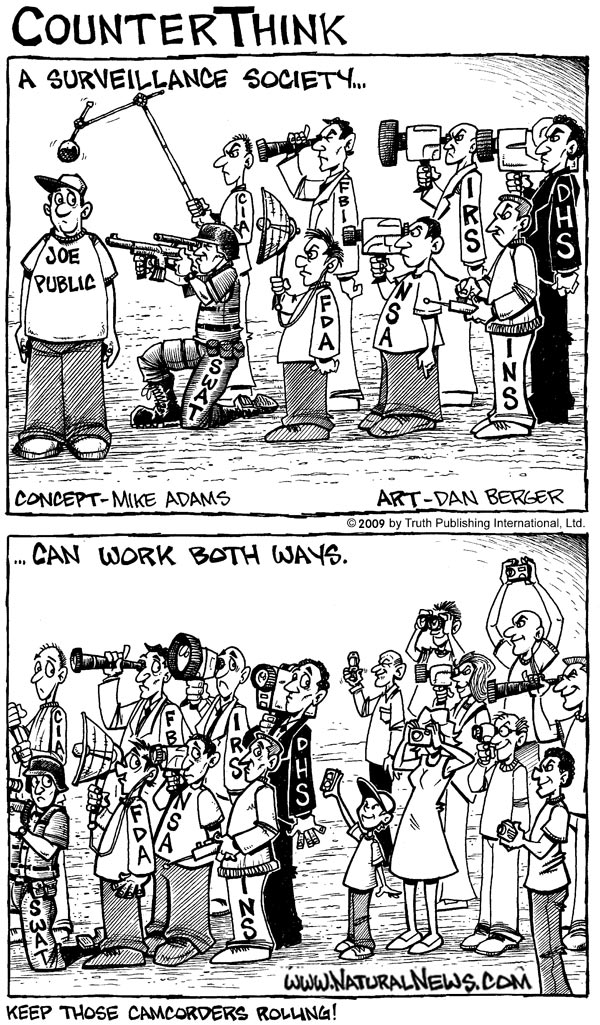 If you want to be prepared for whatever future may bring, then The Lost Ways is a perfect solution for you. It contains tons of valuable information, and even I was pleasantly surprised with the quality. You will find out everything you need to know to survive and protect your family.

The Thinking Man’s Trump: 3 Reasons the Donald’s Run Will Ensure a Carson Win