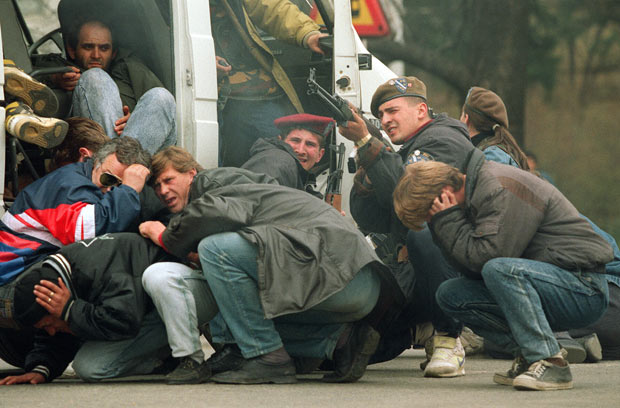 Editor’s Note: The following commentary comes to us from Selco of SHTF School, one of the preparedness community’s most well known authors – and for good reason. Selco survived the Balkan war of the 1990′s and described his experiences in his online course One Year In Hell.

He has seen the worst that humanity has to offer and once again shares his thoughts on living in a world that has completely fallen apart.

If you want a first person perspective on what collapse looks like then keep reading.

It looks like there is no sense and order in what ISIS folks are doing while they are terrorizing people and burning them alive, stone them to death, kill captured soldiers or simply women and kids. But spreading terror and pure fear makes lot of sense in terms of strategy, especially in already „chaotic“ times and territories where they are trying to advance.

Terror is a psychological game.

The “they are coming for me feeling”

I have experienced for myself, more than once the feeling that „they are coming for me“. It is that moment when you are armed and ready, together with more folks, who are armed too and we are all waiting for attack.

And guys who are attacking are famous for the fact that they do not take prisoners, or that they have few sick guys who are collecting ears from the captured people, while they are still alive.

No matter how well you are armed and prepared and ready to fight, if you hear about their atrocities for weeks and then one evening you are forced to fight with them it will have impact on you.

You will face stress of battle but also have to deal with your own fear.

Of course different people react in different ways, so some guys will break down or give up even before fight, without single bullet flying through the air.

Some guys will even surrender without fight and beg for mercy, even they listened stories about „no prisoners“ for weeks. Often they are the people who can not imagine how truly evil people act. They think because they would not kill and torture other people they do not know nobody would. It makes no sense, but it is what terror does and why it works. It makes people act without sense, makes them do stupid things, to be confused and not logical.

Terror is advanced level of trash talk in sports where one opponent tries to make the other one angry that he loses focus. When it comes to terror it is just fear that is used as weapon.

I have seen that sometimes only rumor about some infamous unit coming to attack is enough that groups who are very well organised simply fall apart.

If you hear that there is unit coming and they will torture and kill everyone in their way including your kids and woman, you have two choices: To fight to the last or run.

Few times I asked myself why ISIS has so much success over there in Iraq and Syria. One of the answers is terror. Nothing spreads so fast like terror.

I also think the idea you can have ultimate power over life and death of people makes many people want to join them. People get high on power and that they can decide who lives or dies. If this happens in group you usually find people trying to be more brutal than other people in their group. To be the most respected a feared one.

You finally can rule over people, to judge, it does not have anything to do with religion, it is in human nature of some folks.

Few months ago I read some US weapon forum and one of the members shows his rifle and said how he bought it cheaply and how it was probably used in Balkan war.

On the rifle butt there was still small engraved sign of the unit visible. And strangely I knew that unit.
Unit was famous in war because they (like many others) did lots of bad things, rape, kill prisoners and similar things like private prisons etc.

But at the end most of them ended up dead, killed like the people they killed.

Once when people realize that bullets can kill you no matter how famous or infamous you are it all gets easier.

People dealt with them, and today they are just something like weird war memory with a sign on someones rifle butt. This is a lesson you need to keep in mind in situations when you face enemies that cause fear and terror in you.

First you need to accept your fear and terror. Some people do not accept it and try to pretend its not there until it breaks out and makes them unable to function. Often in situations when it matters most.

Be aware of your fear and terror but also confident in your abilities to face this enemy. This is attitude that you need to show openly also to all members of your group. In groups emotions always get amplified.

Just like walking on edge of high building you focus on the task at hand, the walking or fighting and forget about consequences for that moment.

Terror needs to be dealt with brute force, before it spreads way too much to be contained. It is like disease.
You can get sick from terror, just like from pneumonia for example. Symptoms are fear,panic, doing illogical things, or having urge to run away before even you realize who is your enemy and how you can defeat it.

This is why we prepare, practice and learn to focus on what matters to achieve our goals. Terror only works if you give it power.

What do you make of ISIS and their actions? Please share your thoughts on this and how you try to deal with terror in community forum or comments below.

Visit Selco’s Community Forum to discuss this and other topics

You can follow Selco’s story at SHTF School and learn how he survived one year in hell.

A Survival Q & A: Living Through SHTF In the Middle of A War Zone

Advice From A Collapse Survivor: “RUN!” From Major Cities

Collapse Reality: “If I Had to Be an Animal, I Was an Animal. It Was About Survival.”

Collapse Survivor: “Try To Imagine Yourself In The Worst Moments of Your Life”

On Radical Islam: You Have Exactly Three Choices: “Die… Fight… Or Surrender and Live In Subjugation”