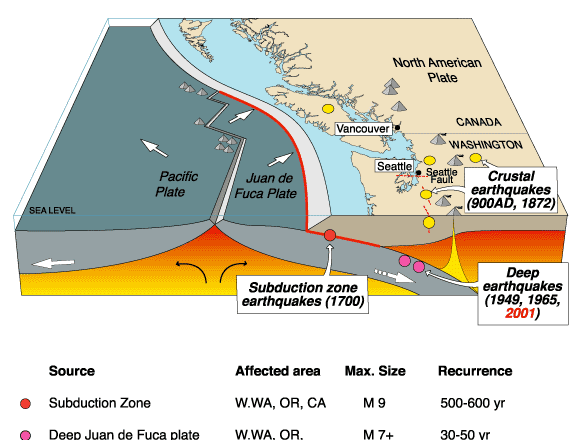 If you live in the Pacific Northwest, you have probably already heard of the Cascadia Subduction Zone.  It is where the Juan de Fuca plate meets the North American plate, and it stretches approximately 700 miles from northern Vancouver Island all the way down to northern California.  This subduction zone is capable of producing far more powerful earthquakes than the much more famous San Andreas fault in southern California, and scientists tell us that it is only a matter of time before another continent-killing earthquake hits this area.  And when it does hit, it will be far worse than any other natural disaster that the United States has ever seen up to this point.

According to CNN, “the largest earthquake in the continental United States” took place along the Cascadia Subduction Zone on January 26th, 1700, and one of the reasons why it is considered to be far more dangerous than other west coast faults is because it is also capable of producing massive tsunamis…

The Cascadia is capable of delivering a 9.0-magnitude quake — an awesome show of force by Mother Nature.

Like I said earlier, it would be far worse than any natural disaster that we have ever experienced in the history of the United States up until now.

And it could happen at literally any moment.  In fact, many scientists believe that we are way overdue for a continent-altering earthquake along the Cascadia Subduction Zone.  Tension has been building up there for a very long time, and at some point that tension will be released.

A recent piece by Adam Rothstein gives us an idea of what the first few moments of such a quake might look like in the city of Portland, Oregon…

Cacophony swells from the city as if it is howling in response to the earth’s call: car alarms, shattering glass, the thudding of bricks popping out of building facades, humans screaming in fright, and far off, echoes of what sound like dumpsters clattering to the ground from the jaws of garbage trucks. It is the sound of shifting foundations and collapsing masonry, continuously, a roar increasing from every direction. It is the sound of the living surfaces that a city takes for granted becoming undone.

Since we have not experienced such an earthquake in any of our lifetimes, it is easy to assume that one will never happen.

But that is not what the scientists are telling us.

In fact, they insist that the odds of “a continent-rending earthquake” in the near future are actually quite good…

The Pacific Northwest is due for a continent-rending earthquake. Experts believe the odds of a Big One happening in the next half century are about one in three, the odds of a Very Big One roughly one in ten, and that, in either case, we are disastrously unprepared.

And let us not forget that the Cascadia Subduction Zone sits directly along the Ring of Fire, and the Ring of Fire has started to become much more active in recent years.

In addition, if the region starts to become more seismically active there is also a very real possibility that we could see a full-blown eruption of Mt. Rainier, which has been described as “the most dangerous mountain in America“.

Let us hope that we have as much time as possible before our nation has to deal with such calamities, but the cold, hard truth is that we are certainly not helping matters by acting so wickedly.

If we continue to do the same things that we have been doing, it is only a matter of time before the judgment of God comes to our land in a major way.  We are killing millions of babies, harvesting their body parts and auctioning those body parts off to the highest bidder.  To many Americans that may seem like “old news”, but I assure you that this is not “old news” to God.

I don’t think that it was any accident that the series of undercover Planned Parenthood videos that were released last year came out when they did.  We were being shown our guilt and we were being given one last chance to repent.

There was a congressional hearing about this last Wednesday.  The following comes from CNSNews.com…

“Have we reached a point in our society where there effectively is an Amazon.com for human parts, entire babies?” Rep. Diane Black (R-Tenn.) asked the witnesses at a special hearing on bioethics and fetal tissue on Wednesday.

Dr. Gerard Kevin Donovan, a pediatrician and bioethicist at Georgetown University, responded that the practice of using tissue from aborted babies for government-funded research “shocks my conscience and it should shock the conscience of the nation.”

Unfortunately, the buying and selling of harvested baby parts does not shock the conscience of our nation.  In fact, most surveys show that an overwhelming percentage of the American people want to continue giving hundreds of millions of tax dollars to Planned Parenthood each year even though they have been doing this.

Since we have not responded to God’s calls to repent, all that is left is for Him to shake us.

And without a doubt, the shaking is coming soon…