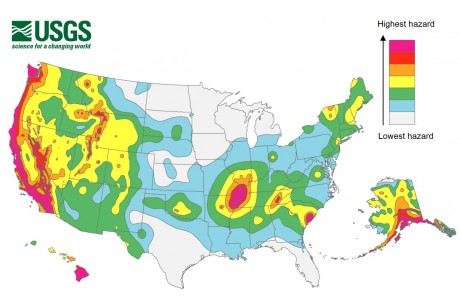 Did you know that Oklahoma was just hit by the largest earthquake ever recorded in the history of the state? And did you know that Oklahoma absolutely shattered their yearly record for earthquakes in 2015 and may break it again this year? According to the USGS, the number of significant earthquakes in the eastern and central sections of the nation has more than quintupled in recent years, and concern is growing that we could soon see a “megaquake” in the middle part of the country. Of course no discussion of megaquakes in the middle part of the country can leave out the New Madrid fault zone, which is approximately six times larger than the San Andreas fault zone in California. Scientists assure us that the New Madrid fault is around 30 years overdue for a major seismic event, and when it does happen it is going to be the biggest disaster in modern American history up to this point.

Late last month, eight states took part in a major drill that simulated what the damage from a New Madrid earthquake might look like. The following comes from a news report that was posted on August 24th…

Missouri, Kansas, Nebraska, Iowa, Illinois, Tennessee, Kentucky and Arkansas all took part in the “Show Me Mass Care Exercise” to practice how they would react during a major earthquake along the new Madrid Fault Line, which is a major source of earthquakes in the Midwest and south.

Due to the harder, colder, drier and less fractured nature of the rocks in the earth’s crust in the central United States, earthquakes in this region shake and damage an area approximately 20 times larger than earthquakes in California and most other active seismic areas. Even though large earthquakes occur much less frequently in the NMSZ than in California, the long term average quake threat, in terms of square miles affected per century, is about the same because of the approximately 20 times larger area affected in the central United States.

Back in 1811 and 1812, a series of earthquakes along the New Madrid fault were so powerful that they actually cracked sidewalks in Washington D.C. and rang church bells in Boston. Testimony from eyewitnesses to those earthquakes sounds like something from a post-apocalyptic science fiction novel…

The Midwest was sparsely populated, and deaths were few. But 8-year-old Godfrey Lesieur saw the ground “rolling in waves.” Michael Braunm observed the river suddenly rise up “like a great loaf of bread to the height of many feet.” Sections of riverbed below the Mississippi rose so high that part of the river ran backward. Thousands of fissures ripped open fields, and geysers burst from the earth, spewing sand, water, mud and coal high into the air.

In those days not many people lived in the middle of the country.

What in the world would such an earthquake look like today?

I also want to point out that there are 15 nuclear reactors sitting inside the New Madrid fault zone, so if a megaquake did hit the region we could be looking at Fukushima times 15.

And the earthquakes in Oklahoma (not a part of the New Madrid fault zone) just continue to keep getting bigger and bigger. The USGS now says that the earthquake on September 3rd was the largest ever recorded in the history of the state…

The earthquake that shook Pawnee, Oklahoma, on Sept. 3 is now the state’s largest temblor on record, according to the U.S. Geological Survey, which just upgraded the magnitude to 5.8.

The earthquake was previously pegged at magnitude 5.6. But further analysis of the seismic recordings from the event found the quake size to have a bigger moment magnitude, according to the USGS.

As I sit here writing this article, a magnitude 3.0 earthquake struck near Perry, Oklahoma just about an hour ago.

In the old days, you would never think of Oklahoma as a place that was at risk for major earthquakes.

Unfortunately, those days are long gone.

In the title of this article, I suggested that concern is growing that a megaquake may soon come to the middle of the country. The science definitely seems to back this up, but in addition there are people all over the nation that are having very unusual dreams and visions about such an event. One example of this phenomenon is minister Augusto Perez…

“The burden of the LORD came upon me on Sunday night July 3rd, the day after we got back home from a mission trip. On the next day Fourth of July, I was still under a very heavy burden the whole day. As I was quietly sitting at my desk trying to do some work, the Holy Spirit would not leave me alone. It became so intense that I knew that I had to get up and go to my prayer closet immediately to meet with the LORD. I began to travail before the LORD with groans and moans while I was praying in my prayer language. His Presence grew so strong as I have felt at other times when He really wanted me to go get alone with Him and intercede. I continued to pray for a while until the burden lifted.

After the burden of the LORD had lifted, I continued to pray on my face when I saw a vision of a large angel of the LORD with a large sword and he plunged it into the heartland of America. As he did, blood started coming out from the ground where his sword had been plunged into. After I saw this vision, my travailing prayer grew more intense as I began to plead with the LORD regarding what He had just shown me. I felt much grief and sadness in my spirit while this was going on. Even now, I am still grieving and great sadness fills my spirit. As I continued to pray, then I heard the voice of the LORD say to me: “THERE IS NO MORE TIME, MY SON”.

But of course Augusto Perez is far from alone. My wife was sent a dream by a woman named Rebecca Barnes that seems to indicate that the big New Madrid earthquake will strike after we divide the land of Israel…

In the dream I had I was above the USA, I could see all the trees and mountain ranges. I seen a spear come out of the sky, it pierced southern MO and ripped it down all the way to the gulf through Louisiana.

Then I saw it rip up through to the Great Lakes.

I saw st. Louis MO sink under the ground.

I heard the following exact word’s in my spirit “if they divide my land, I will divide their nation”

Over the past week, a previous article that I did about the coming New Madrid earthquake has gone megaviral. The Most Important News has gotten more traffic than ever before, and I believe that there is a reason why this old article has suddenly struck such a chord.

There are lots and lots of people out there that believe that the time for the New Madrid megaquake is drawing very close. If you are not familiar with these things, this may sound very strange to you. But the truth is that God has been showing people what is coming literally for decades, and now there seems to be a tremendous amount of urgency in the air.

So let us hope and pray that it does not happen any time soon, but without a doubt our planet is becoming increasingly unstable and we live in very unusual times.

The Lost Ways will make you completely independent in case anything happens. You will find out how to create a safe subterranean roundhouse invented by Native Americans. This bunker will provide a haven for you and your family. Hunting tricks described in the course will save you from starvation and malnutrition. Water preservation techniques and guides to natural medicine are also included in the program.Claude Davis, the author of the program, has the philosophy, which forms the core of this course. It consists of 3 main rules. One of them is based on the idea, that only you are the creator of your destiny and no one else. If any catastrophic event happens, it has to be you, who will stand strong and fight to survive during the harsh times.