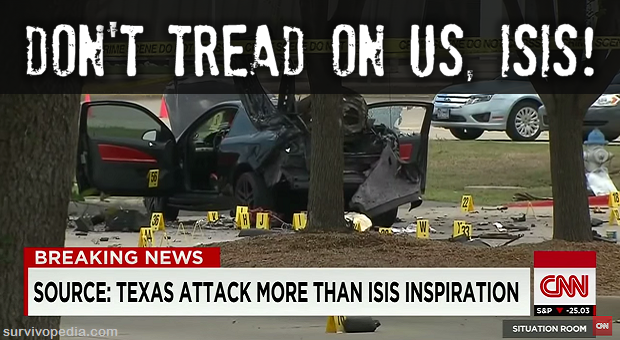 The Islamic State (ISIS) has long been bragging that they would be making attacks on American soil, and they finally have. Reacting to an art exhibit and cartoon contest, two ISIS gunmen descended on Garland, Texas, with the intent of showing us who’s boss.

But rather than owning the day, the two got owned by a local police officer, even though they had him outnumbered and outgunned. When the dust settled, both ISIS terrorists were dead and a security guard was wounded in the leg.

If this had to happen anywhere, Texas was the place for it. Texans–and I’m one of them–love their freedom and their guns, holding on to the spirit of the Old West, where shooting a criminal was just thought to be part of the day’s work. The Garland police officer definitely gave these gunmen a new and fresh understanding of the shootout at the OK Corral.

What Sparked This All

It was a cartooning contest where artists drew cartoons of Mohammad, the Prophet of Islam. Apparently this is against Islamic law and greatly offensive to Muslims. But in the land of the free, you’ve got to be ready to be offended. There are always people who will have a different opinion than you do and many of them will express it in offensive ways.

Some would say that the ability to overlook offenses is a sign of maturity. If that’s the case, then there are a lot of immature people in the world, including radical Muslims. They don’t seem to be able to stand anything being said against their religion, beliefs or actions.

These two ISIS gunmen responded to the offense of the cartooning contest in true radical Muslim fashion, deciding to kill people. While we have no way of knowing exactly who they intended to kill, it appears from the ISIS press release that they had their sights set on Pamela Geller, the event’s organizer.

They probably also wanted to hit the owners and managers of the venue, as well as anyone else who was involved in creating it. To be able to kill some of the artists would have probably been seen as a special bonus.

Stepping from their car at the event, the two gunmen were holding AR-15s, the civilian semi-automatic version of the Army M-16 and M-4 fully-automatic assault rifles. They opened fire, managing to wing a security guard in the leg. But even with this excellent firepower at their disposal, both gunmen were taken out by one police officer, firing his .45 caliber service pistol.

This would seem to indicate that the two gunmen were untrained or poorly trained, yet ISIS claims that they were trained shooters who gave their lives to make a statement. If that’s the way that ISIS plans on making their statements here in the United States, I’ll have to say that we don’t have much to worry about.

Is This the Beginning?

This seems to be the opening salvo in the ISIS jihad against the United States of America. We know that they’ve been smuggling terrorists into the country, because there were 10 captured in McAllen, Texas (a border town) a few months ago. If that many were caught, we can be sure that many more made it across and are in hiding somewhere here in our homeland.

This is confirmed in the same press release that ISIS used to take credit for the Garland attack. The writer states that they have 71 “trained soldiers” in 15 different states. While he mentions five of those states, he doesn’t say a thing about the others, except that they exist. Of those 71 “soldiers” supposedly 23 have signed up for “missions like this,” which I would have to take as meaning suicide missions of one sort or another.

To be honest with you, I’m surprised that they only have 71 people whom they’ve managed to smuggle into the U.S. they are either lying and have succeeded in smuggling in more, or they are more inept at smuggling their people through the Mexican border than one would expect. The Border Patrol has stated that they catch about 10 percent of the people who try to sneak across the border, so the ten caught would indicate that there are at least 100 of them who have made it.

Apparently these were home-grown terrorists and not ones that ISIS sent here to attack. 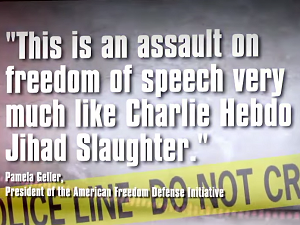 That means that they probably weren’t as well trained as whoever released the press release would like us to believe.

If that’s the level of training of the rest of their “soldiers” then they won’t succeed in damaging much or killing many people.

Nevertheless, we shouldn’t take them too lightly, as a man with a gun or bomb is still a danger. The odds can always work for them, rather than against them, and they can manage to accidentally take out more of us infidels in their death than their skill would otherwise warrant.

Let me make something clear here. The mainstream media has been bashing the event, as if the organizers and participants are guilty of what happened. All they are guilty of is exercising their First Amendment rights.

The media doesn’t complain when liberals bash Christians for their beliefs, so why should these kind of Muslims receive special consideration? There’s really no reason why they should, but I’ll tell you why they are… it’s because they make the wimps in the media afraid of them.

So, What’s Going to Happen Next?

I think it’s safe to say that ISIS has taken affront at how easily their two “soldiers” were overcome, regardless of what their level of training was. It doesn’t look good for them to have lost their first battle so easily; nor do the odds look good for them. Someone in the organization is going to realize that and decide that they can’t afford to just sit on their laurels, waiting for a golden opportunity to present itself.

That means that we can expect more attacks. Most specifically, Pamela Geller can expect them to track her down and come after her. But considering that these terrorists aren’t as concerned about strategic targets as they are in violence, those attacks could take place anywhere and against anyone. We must all remain vigilant.

If ISIS is truly trying to carry the war to us, then that’s fine with me. There are enough gun-toting conservatives here in this country to give them pause. We have more veterans from the Middle East war, than they have soldiers. On top of that, there are over 100,000 gun owners, many of who are ready to stand and defend home, family and even country.

ISIS may succeed in causing some bloodshed, but in doing so, they will awake a sleeping giant; a giant who has them outgunned, out-trained and outnumbered.

It is for things like this that many thousands of Americans have concealed carry licenses. We keep guns in our homes, in our cars and on our persons, just to be able to counter this sort of threat. For every one of their “soldiers” there are over 15,000 gun-toting Americans, who legally carry concealed.

While the police can’t be everywhere and in truth there aren’t even enough of us who legally carry concealed to be everywhere, chances are, we’ll be where they are; ready to stand and defend our friends, neighbors and country from this attack.

If you don’t have a concealed carry license, might I suggest that it’s time to get one. You don’t take a knife to a gun fight and you don’t go up against a terrorist empty-handed. They want to die for their god, so it seems like we should be ready to help them along, when the time comes.

I am proud of that police officer in Garland, Texas, whoever he might be. In true American fashion, he put himself at risk, standing up against oppression and tyranny, just as the founding fathers did.

Make no mistake, radical Islam is tyranny and they are here to conquer our country. But as long as we have Americans who will stand up like that officer did, they will not succeed.