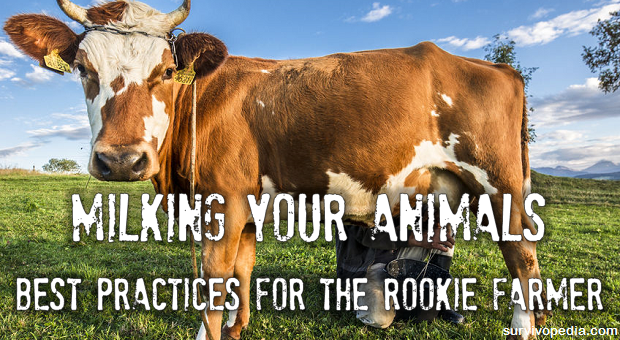 So now you have cows and maybe some goats. All you need to do is go out and ask them nicely to fill your pail with milk, right? We wish it were that easy! There are some things that you need to know about milking before you just go out and grab a stool.

We have some tips for beginner farmers about how to milk your animals.

How to Keep From Getting Kicked by Your Milk Cow

You’ve likely seen horses or mules kick. They kick out behind them but cows don’t; they kick forward. This is especially troublesome when you’re sitting right where they can land a hoof. Even if they miss you, there’s a good chance they’ll get the milk bucket.

We have a few tips for you though.

Milking can be a dirty business; to prevent the spread of mastitis among your cows and to keep your milk clean and as free of bacteria as possible, you have to practice good sanitation.

How to Milk a Cow

Most people milk in a milking shed that has a locking gate.

There will be a feed bin or bucket on the other side that you put feed in to give the cow something to do while you’re milking. Put feed in the bin then when your cow sticks her head through the gate, close it.

Set your stool up and put on the kick bar. Place the bucket under the udders, keeping your secondary bucket within reach.

Most of the time, you’re going to milk a cow from the side though I do know a few people who milk from behind. The problem there for me is that cow poop in your hair is gross.

Place your stool back near the rear leg and try to keep it further forward and a bit to the outside if you can; this will help to keep you from getting kicked.

Some people milk each side, then reach over and do the teats on the other side. It doesn’t really matter what order you milk in unless your cow has a preference. (Yes, some do!)

Place your hand around the teat and nudge upwards just a bit. This will help the milk come down as it imitates a calf nudging. Then gently but firmly squeeze the top of the teat closed with your forefinger and thumb, then roll the rest of your fingers down the teat, squeezing it between your fingers and your palm.

If you can milk two teats at once, that’s even better. Eventually you’ll get the hang of two-handed milking.

Milk til each teat is dry; you don’t want to leave milk in there.

How to Milk a Goat

Milking a goat is pretty much the same as milking a cow, except in miniature.

The differences are that you may use a milking platform to elevate the goat, you won’t use a head lock, and you’ll milk it from behind.

Just reach around and follow the same procedure as you do for milking a cow.

What to Feed a Cow or Goat for Good Tasting Milk

What your cow or goat eats determines what the milk tastes like. There’s nothing more disgusting than onion-flavored milk so you may want to keep an eye out for wild onions in your cow pasture.

Corn, sweet feed, alfalfa, grass and other good-quality hay are the best options. Some people are shying away from corn because of the GMO issue. That’s up to you.

Mastitis is inflammation in the mammary gland and udder and can actually kill an animal if it’s not treated. Also, you can’t drink milk from an animal with mastitis. It’s caused by bacteria that get up into the teat or by injury incurred to the udder and it’s not something to mess around with.

Symptoms include a hot, swollen udder that will often be hard to the touch. She’ll also likely be sensitive as it’s quite painful. Milk will be clotty and off-colored.

Mastitis can cause permanent damage to the teat or the udder even if it’s treated properly.

Mastitis is contagious and can be transmitted through contact with contaminated or dirty bedding, hands or milking machines, which is why cleanliness is so important.

It’s treatable with antibiotics but you can’t drink the milk while she has it or for several weeks after she receives the antibiotics.

To do your best to prevent mastitis, keep your barn clean and wash your hands and equipment between each cow and after every milking. Follow the cleanliness tips above.

Treat mastitis as soon as you notice it; that will make a huge difference in recovery time and prognosis.

Drying Your Cow or Goat Up Safely

If you decide that you no longer want to milk your cow, you need to dry her up responsibly. For best performance, you want to give your cow a break periodically so that her mammary tissue can heal and regenerate.

Perhaps the best way to dry up your milk cow or goat is by natural weaning. A cow or goat will naturally begin to wean her offspring off at about the six-month mark by preventing it from suckling as much over a period of about 2 weeks. This allows her to dry up comfortably and safely and reduces the risk of mastitis.

You can mimic this process by slowly reducing your milking though some research indicates that abrupt dry off is best. Do what works best for your animal. If you opt to reduce milking, switch to milking just once per day, then once every other day.

You can also help the process along by reducing the energy content of her diet. Give her more fiber (hay) and less grain. If you feed alfalfa while you’re milking, switch to grass hay. Do this for two weeks and she should dry up nicely. Don’t limit her feed or water, just change her diet.

After the two-week period, milk her one last time (or let her calf suckle) then don’t milk her again until her next lactation period. This works fine for most cows and goats. There is also a supplement that you can get to add to your animal’s feed that will hasten the drying process.

Now you know a bit more about how to milk your cow and goat. If you are an experienced milker or even a novice with more questions, please chime in in the comments section below.

7 Ways To Hide Your Survival Garden

The Top 9 Most Nutritious Food For Your Survival Garden

The Best Emergency Food Methods For the AFTERMATH of SHTF