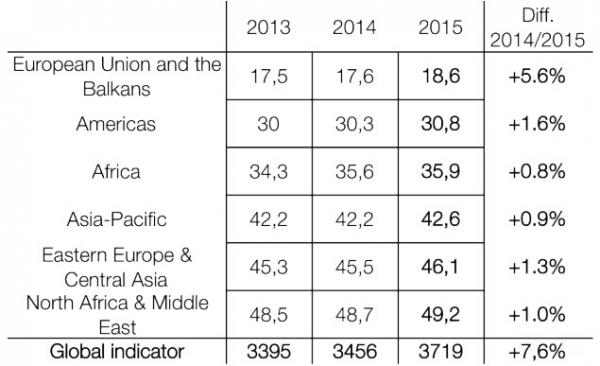 This article was originally published at Zero Hedge.

Editor’s Note: From the repressive tactics used against reporters at Ferguson, to the frequent attempts to arrest, prosecute or ‘disarm’ individuals filming the police, to attempts to strip the legal status of “journalist” and “press” from controversial individuals (including jailed reporter Barrett Brown, who shared leaked data hacked by ‘Anonymous’), it is clear that the United States is not the free country it once was, and freedom of speech and the freedom of the press is clearly slipping with other benchmark standards of the once free America.

Additionally, there is an increasing subtle but draconian moves to force blogs and Internet sites to register and be regulated online, with the implications for chilled free speech all too clear to those watching. These events and more are further coupled with the pulling back of the curtain on surveillance – leaks, investigations and stiff-lipped defenses by officials have made all-too-clear that the spying on Americans – in their Internet and cell phone communications, and on the streets – is total and pervasive.

The NSA and other related agencies and private firms have no interest whatsoever in honoring the Fourth Amendment, so why would anyone think they’d stand up for the First Amendment? If the worldwide attention on the police killings of Michael Brown, Eric Garner, Tamir Rice and many others doesn’t change this trend, then things will surely get worse with time, and the understanding that actions against transparency will not be held in check.

A milestone for the U.S. today… a tombstone tomorrow?

The 2015 World Press Freedom Index highlights the worldwide deterioration in freedom of information in 2014. Beset by wars, the growing threat from non-state operatives, violence during demonstrations and the economic crisis, media freedom is in retreat on all five continents. There was a drastic decline in freedom of information in 2014. Two-thirds of the 180 countries surveyed for the 2015 World Press Freedom Index performed less well than in the previous year.

The annual global indicator, which measures the overall level of violations of freedom of information in 180 countries year by year, has risen to 3,719, an 8 percent increase over 2014 and almost 10 percent compared with 2013. The decline affected all continents.

But as Liberty Blitzkrieg’s Mike Krieger notes, the bastion of press freedom in the land of the free, fell once again… to 49th!!

In the United States, 2014 was marked by judicial harassment of New York Times investigative reporter James Risen in connection with the trial of Jeffrey Sterling, a former CIA officer charged under the Espionage Act with giving him classified information. US journalists are still not protected by a federal shield law that would guarantee their right not to name their sources or reveal other confidential information about their work. Meanwhile, at least 15 journalists were arbitrarily arrested during clashes between police and demonstrators protesting against black teenager Michael Brown’s fatal shooting by a white police officer in Ferguson, Missouri.

The greatest myth we Americans collectively like to tell to ourselves is that we live in the “land of the free.” We particularly pride ourselves on “freedom of the press” — enshrined in the U.S. Constitution — but how free is this press really?

As you might expect, the economic decline of a nation into rule by a handful of corrupt oligarchs will have many other negative repercussions. One of these is a loss of civil rights and freedoms that many of us have taken for granted. Reporters Without Borders puts out their Press Freedom Index every year, and the 2014 ranking came out today. It was not a good showing for the USSA. Specifically, the U.S. registered one of the steepest falls of all nations, down 13 slots to the #46 position. As the screen shot shows, just above Haiti and just below Romania.

Well the decline continued in 2014. Dropping three spots, the U.S. now comes in just below Burkina Faso, Niger and Malta to #49. The AP notes that:

The U.S. fell three places to 49th amid a “war on information” by the Obama administration in some cases. Reporters also faced difficulty covering events like demonstrations in Ferguson, Missouri, where a black teenager was shot dead in August by a white police officer, Morillon said.

It’s not just the U.S. either. There is a global trend away from press freedom, which makes perfect sense given that world wealth is basically being consolidated by a handful of oligarchs who don’t want the rabble to have access to anything but their various forms of propaganda. For example:

War, the rise of non-state groups, crackdowns on demonstrations and economic crises provided a backdrop for a tough 2014. The Paris-based media watchdog said two-thirds of the 180 countries surveyed in its annual World Press Freedom index scored worse than a year earlier.

Western Europe, while top-ranked, lost the most ground as a region. Three Nordic countries headed the list, but there was slippage in Italy — where mafia and other threats weighed on journalists — and Iceland, where the relationship between the media and politicians soured, the group said.

Here’s the list of countries that ranked ahead of the U.S.

When it comes to these United States, it’s not just press freedom that has been plunging. Economic freedom has been also spiraling down the toilet bowl ever since the year 2000. Recall the post from last fall, New Report – The United States’ Sharp Drop in Economic Freedom Since 2000 Driven by “Decline in Rule of Law”. Here’s an excerpt:

Expanded use of regulation has also been an important contributing factor to the declining ratings of the United States. During the past decade, non-tariff trade barriers, restrictions on foreign investment, and business regulation have all grown extensively. The expanded use of regulation in the United States has resulted in sharp rating reductions for components such as independence of the judiciary, impartiality of the courts, and regulatory favoritism. To a large degree, the United States has experienced a significant move away from rule of law and toward a highly regulated, politicized, and heavily policed state.

Land of the free?