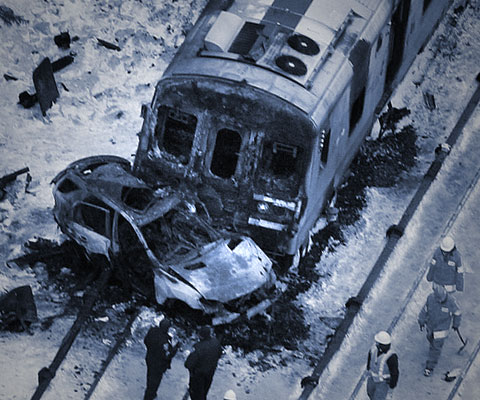 The story of the dead bankers rolls forward.

In December 2014, Zero Hedge rounded up a list of 36 dead bankers who died recently under mysterious or odd circumstances, leaving only “riddles” and probing questions about their possible connections.

Now, a bizarre Hollywood-style train collision with an SUV Mercedes sitting on the tracks leaves three more dead bankers, along with a pharmaceutical researcher and a well-known art curator.

According to the initial investigations of the NTSB, which include witnesses at the scene, the driver exited the vehicle on the tracks to inspect it being hit by a crossing gate:

Reports so far show that 49-year-old Ellen Brody crossed onto the tracks, when the crossing gate slammed down on the back of her vehicle. Instead of pulling through the intersection though, she got out to inspect the back of her car. It was when she got back in her car and started to pull forward that she was struck by the passing train – going 58mph.

The crash led to the train being engulfed in flames after the electrified third rail basically incinerated the passenger cars. Loaded with hundreds of passengers, a reported 70 were injured and only five died, with the conductor and train operator among the survivors of the freak accident:

Hundreds of feet of electrified rail skewered the first two carriages of a New York commuter train in a collision with a car at a railroad crossing, a federal investigator said on Wednesday, describing the area’s worst rail crash in decades.

Investigators were focused on why the car was stopped at the crossing near the suburb of White Plains north of New York City before the Metro-North train crashed into it during Tuesday evening’s rush hour, pushing the vehicle about 1,000 feet down the line.

The rail broke into long pieces, penetrating the first train carriage as a fire broke out, apparently fueled by gasoline in the vehicle’s fuel tank, gutted the rail car’s interior, he said. At least one section of the electrified, or “third,” rail also entered the second carriage near its ceiling.

Five train passengers and the woman who was driving the Mercedes sport utility vehicle that was stuck on the tracks were killed. Investigators said they do not yet have an explanation for how the vehicle, which officials had earlier mistakenly identified as a Jeep, became stuck on the tracks.

So, who were the unfortunate victims of this horrific crash?

Out of the hundreds of passengers from the general public who could have had the misfortune of being among the five passengers killed from the train, it is seems that all five were prominent figures in New York society.

What are the odds? Bloomberg Business carried these obituaries:

Joseph Nadol, 42. Managing director at JPMorgan, who joined the Manhattan-based bank in 2001. Institutional Investor magazine in 2009 named him the best analyst covering the aerospace and defense-electronics industries. Died Feb. 3 in the Metro-North Railroad train accident.

Robert Dirks, 36. Scientist at D.E. Shaw Research, which creates computer models of organic molecules for use in drug development. A high school valedictorian, he received a Ph.D. in chemistry from the California Institute of Technology. Died Feb. 3 in the Metro-North Railroad train accident.

Walter Liedtke, 69. Oversaw the collection and special exhibitions of European paintings at the Met Museum in Manhattan for the past 35 years. He was an authority on the works of Johannes Vermeer and Rembrandt. Died Feb. 3 in the Metro-North Railroad train accident.

In a further tragedy for the family of Aditya Tomar, the hospital initially mixed up his records and reported that Tomar was ‘fine and undergoing x-rays,’ giving them initial relief, when in fact, it turned out that he was deceased:

Reshma and her brother rushed to Westchester County Medical Center to see if Tomar was among the injured, where they received some good – but ultimately false – news.

That person also told Reshma to go home and come back in the morning, but her brother remained suspicious that all was well.

‘Something didn’t add up in my son’s mind, so he dropped his sister home and went back on his own,’ Dee said. ‘He was there all night trying to figure out if (Tomar) was actually in the hospital.’

The next morning, they realized that everyone at the hospital had been accounted for except Tomar, and Reshma submitted her husband’s medical records to the Medical Examiner. Later that night they finally got confirmation that he was among the deceased.

A spokesman for Westchester Medical Center told the Daily News that they are looking into the incident.

That’s a vice president and two managing directors for the big banks, with overlapping investment interests in defense contracting and technology.

In a dramatic and strange accident where the “front carriage of the train explode[d] into a fireball,” we must ask questions about what is really behind this tragedy.

Really? What are the odds? A completely devastating train wreck, and none of those who lost their lives happened to have low level, average jobs?

Are bankers disappearing and dying to silence what they know?

Is something else going on?