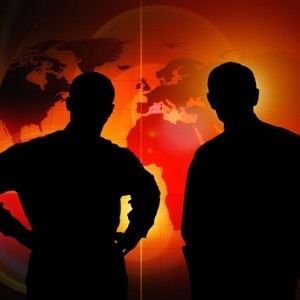 The stock market continues to flirt with new record highs, but the signs that we could be on the precipice of the next major financial crisis continue to mount. A couple of days ago, I discussed the fact that the U.S. dollar is experiencing a tremendous surge in value just like it did in the months prior to the financial crisis of 2008. And previously, I have detailed how the price of oil has collapsed, prices for industrial commodities are tanking and market behavior is becoming extremely choppy. All of these are things that we witnessed just before the last market crash as well. It is also important to note that orders for durable goods are declining and the Baltic Dry Index has dropped to the lowest level on record. So does all of this mean that the stock market is guaranteed to crash in 2015? No, of course not. But what we are looking for are probabilities. We are looking for patterns. There are multiple warning signs that have popped up repeatedly just prior to previous financial crashes, and many of those same warning signs are now appearing once again.

One of these warning signs that I have not discussed previously is the wholesale inventories to sales ratio. When economic activity starts to slow down, inventory tends to get backed up. And that is precisely what is happening right now. In fact, as Wolf Richter recently wrote about, the wholesale inventories to sales ratio has now hit a level that we have not seen since the last recession…

In December, the wholesale inventory/sales ratio reached 1.22, after rising consistently since July last year, when it was 1.17. It is now at the highest – and worst – level since September 2009, as the financial crisis was winding down:

Rising sales gives merchants the optimism to stock more. But because sales are rising in that rosy scenario, the inventory/sales ratio, depicting rising inventories and rising sales, would not suddenly jump. But in the current scenario, sales are not keeping up with inventory growth.

Another sign that I find extremely interesting is the behavior of the yield on 10 year U.S. Treasury notes. As Jeff Clark recently explained, we usually see a spike in the 10 year Treasury yield about the time the market is peaking before a crash…

And it’s the first sign of an impending stock market crash. 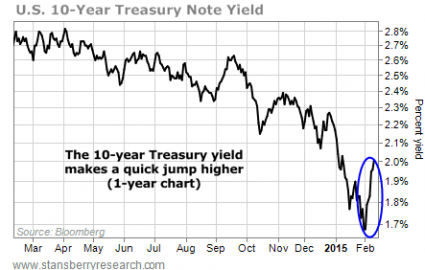 As I explained last September, the 10-year Treasury note yield has ALWAYS spiked higher prior to an important top in the stock market.

Let’s be clear… not every spike in Treasury rates leads to an important top in the stock market. But there has always been a sharp spike in rates a few months before the top.

Once again, just because something has happened in the past does not mean that it will happen in the future.

But the fact that so many red flags are appearing all at once has got to give any rational person reason for concern.

Yes, the Dow gained more than 100 points on Thursday. But on Thursday we also learned that retail sales dropped again in January. Overall, this has been the worst two month drop in retail sales since 2009…

Following last month’s narrative-crushing drop in retail sales, despite all that low interest rate low gas price stimulus, January was more of the same as hopeful expectations for a modest rebound were denied. Falling 0.8% (against a 0.9% drop in Dec), missing expectations of -0.4%, this is the worst back-to-back drop in retail sales since Oct 2009. Retail sales declined in 6 of the 13 categories.

And economic activity is rapidly slowing down on the other side of the planet as well.

For example, Chinese imports and exports both fell dramatically in January…

Chinese imports collapsed 19.9% YoY in January, missing expectations of a modest 3.2% drop by the most since Lehman. This is the biggest YoY drop since May 2009 and worst January since the peak of the financial crisis. Exports tumbled 3.3% YoY (missing expectations of 5.9% surge) for the worst January since 2009. Combined this led to a $60.03 billion trade surplus in January – the largest ever. But apart from these massive imbalances, everything is awesome in the global economy (oh apart from The Baltic Dry at record lows, Iron Ore near record lows, oil prices crashed, and the other engine of the world economy – USA USA USA – imploding).

In light of so much bad economic data, it boggles my mind that stocks have been doing so well.

But this is typical bubble behavior. Financial bubbles tend to be very irrational and they tend to go on a lot longer than most people think they will. When they do finally burst, the consequences are often quite horrifying.

It may not seem like it to most people, but we are right on track for a major financial catastrophe. It is playing out right in front of our eyes in textbook fashion. But it is going to take a little while to unfold.

Unfortunately, most people these days do not have the patience to watch long-term trends develop. Instead, we have been trained by the mainstream media to have the attention spans of toddlers. We bounce from one 48-hour news cycle to the next, eagerly looking forward to the next “scandal” that is going to break.

And when the next financial crash does strike, the mainstream media is going to talk about what a “surprise” it is. But for those that are watching the long-term trends, it is not going to be a surprise at all. We will have seen it coming a mile away.

The post Two More Harbingers Of Financial Doom That Mirror The Crisis Of 2008 appeared first on The Economic Collapse.