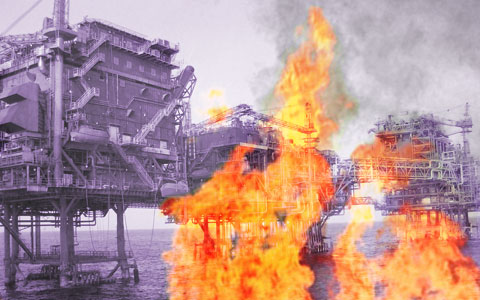 The destabilization in Ukraine and numerous spots in the Middle East – including the ISIS-threatened Iraq and Syria – have been mere preludes to what is coming.

The OPEC countries, led by Saudi Arabia, are allowing oil prices to fall drastically, in clear coordination with its Anglo masters, and in response to the sudden rise of shale gas production obtained through fracking. These Arab states will not lose power with the falling oil prices, while many other regimes will face pressure in all sectors.

U.S. operatives are working overtime to undermine that by cutting off Russian gas and supplying Europe, instead, with booming shale gas from fracking in and around Ukraine and its rich mineral holdings.

Between rising U.S. domestic production, falling OPEC oil prices and U.S.-led production and exploration in Ukraine, gas could prove a trump card against Russia, though Putin has downplayed these consequences:

“Russia in particular seems vulnerable,” said Allan von Mehren, chief analyst at Danske Banke A/S in Copenhagen. “A big decline in the oil price in 1997-98 was one factor causing pressure that eventually led to Russian default in August 1998.”

Oil and gas provide 68 percent of Russia’s exports and 50 percent of its federal budget. Russia has already lost almost $90 billion of its currency reserves this year, equal to 4.5 percent of its economy, as it tried to prevent the ruble from tumbling after Western countries imposed sanctions to punish Russian meddling in Ukraine. The ruble is down 35 percent against the dollar since June.

At the same time, Russia has just given up its bid to build a South Stream pipeline to bypass Ukraine and has been accused of covertly funding anti-fracking protests in Romania, Ukraine and other areas in the hotzone of the Eastern Europe proxy war over natural gas.

An important secondary consequence of falling oil prices will come in the form of disruptions to social services in countries that have been supporting citizens with money from high oil prices – including Russia, Iran, Venezuela, Nigeria and others.

Falling oil revenue will mean less money for subsidies and handouts. For the geopolitical orchestrators in the Anglo-elite network, this is part of the strategy.

Coddled by years of $100 crude, governments instead spent that windfall subsidizing everything from 5 cents-per-gallon gasoline to cheap housing that kept a growing population of underemployed citizens content.

The Council on Foreign Relations heralded this fracking boom as a means of reasserting North American-based U.S. power around the world and ‘transforming the global energy landscape.’

Now, a spokesperson from its secretive sister organization the Royal Institute of International Affairs, based at Chatham House, has fingered it as a political weapon to spark upheavals and internal revolutions:

“If the governments aren’t able to spend to keep the kids off the streets they will go back to the streets, and we could start to see political disruption and upheaval,” said Paul Stevens, distinguished fellow for energy, environment and resources at Chatham House in London, a U.K. policy group. “The majority of members of OPEC need well over $100 a barrel to balance their budgets. If they start cutting expenditure, this is likely to cause problems.”

For a U.S. that many have said lost its credibility in the world, and has seen a decline in its position as the foremost global superpower and a certain, but slow decline of the petrodollar’s status as world reserve currency, the move in shale gas is a power move to level the global playing field.

The “sudden rise” of shale natural gas has been a planned, coordinated and highly strategic move. Plummeting oil prices are indeed an economic weapon against Russia, as many analysts have shown, and act to call the bluff of the other players at the table as well. It poses serious challenges to tensions with Russia, and will have immediate consequences for many other economies based on oil. Bloomberg explains the positions:

To be sure, not all oil producers are suffering. The International Monetary Fund in October assessed the oil price different governments needed to balance their budgets. At one end were Kuwait, Qatar and the United Arab Emirates, which can break even with oil at about $70 a barrel. At the other extreme: Iran needs $136, and Venezuela and Nigeria $120. Russia can manage at $101 a barrel, the IMF said.

“Saudi Arabia, U.A.E. and Qatar can live with relatively lower oil prices for a while, but this isn’t the case for Iran, Iraq, Nigeria, Venezuela, Algeria and Angola,” said Marie-Claire Aoun, director of the energy center at the French Institute for International Relations in Paris. “Strong demographic pressure is feeding their energy and budgetary requirements. The price of crude is paramount for their economies because they have failed to diversify.”

To be sure, there are no good guys at the table of global power. All are corrupt.

But the powers-that-be in the elite Anglo-financial world are betting that it will be enough to hold U.S. power across the world, boost the U.S. economy and hold its competitors in the ongoing game of global chess at bay. Current economic forecast show the possibility and perhaps likelihood that they have put down another dominating hand that will shape global trends for decades to come.

Through fracking, the U.S. trade deficit in oil is expected to balance out and to transform America into a profitable net exporting region in petroleum and gas within just a few short years:

There is no question that the US has entirely changed the global energy landscape and poses an existential threat to Opec. America has cut its net oil imports by 8.7m bpd since 2006, equal to the combined oil exports of Saudi Arabia and Nigeria.

The country had a trade deficit of $354bn in oil and gas as recently as 2011. Citigroup said this will return to balance by 2018, one of the most extraordinary turnarounds in modern economic history.

It may, of course, also carry enormous environmental consequences for Americans who face the possibility of tainted groundwater supplies, water shortages, increased earthquakes (as seen in Oklahoma) and other forms of pollution related to the use of countless chemicals shot into the earth during the hydraulic fracturing process.

In the Godfather, Michael Corleone took care of “all family business” in one fell swoop during his baptism as The Don following his father’s death, targeting the heads of the five gang families at war with his family’s cartel, along with several other vendettas, both persona and “just business”…

Today, the U.S. is attempting to do the same through fracking and the orchestrated, falling global oil prices.