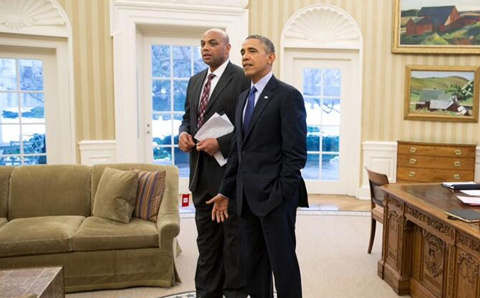 With NFL players and Congressional members now engaging in the ‘Hands Up, Don’t Shoot’ movement in a show of support for the Ferguson protests, one particular superstar is taking a different stance.

Retired NBA player Charles Barkley doesn’t side with the protesters. In fact, he is appalled by their behavior following the Ferguson Grand Jury decision to not indict officer Darren Wilson. In a recent interview he made some comments that more than likely won’t help him make any new friends in the African American protest circuit.

I’ve got more support now than I’ve got negativity.

It’s like them jackasses who are looting. Those aren’t real black people. Those are scumbags.

Real black people… they’re not out there looting. I just watched a great story on CNN where a bunch of really amazing folks wouldn’t let them burn down establishments… it was a great story.

Unfortunately, the way the media portrays a lot of black people… we only put the negative black people on television. We don’t put the good, hard working black people… there’s a perception among some black people that if you’re not a thug or a hood-rat, and you don’t wear your pants down around your ass you’re not black enough. And they are always holding us back, plain and simple.

If it wasn’t for the cops we’d be living in the Wild Wild West in our neighborhoods.

Do you know how bad some of these neighborhoods would be if it wasn’t for the cops?

I don’t know what happened in Ferguson. Nobody knows what happened… but I want to take the time as a responsible person… and read the Grand Jury statement.

Listen to the Interview:

Black or white, when individuals turn to looting, robbing, beating and burning, especially when they target independent businesses or innocent people for no other reason than the color of their skin, it is no longer about raising awareness of the issues. Rather, it is nothing more than animalistic behavior that divides, rather than unites a cause.

Barkley, unlike our political leaders and protest organizers, sees this for what it is – just another propaganda ploy to create friction and hate so that people like Eric Holder can propose new regulations and legislative actions that further erode our liberties and divide Americans.

The point is to keep us all fighting with each other, whether figuratively or literally. Then ‘they’ can save us with even more Orwellian-style control mechanisms.