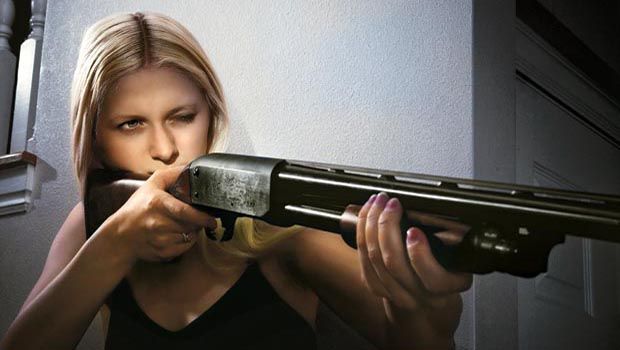 It has become increasingly apparent to me that most people who think they’re protected against a serious calamity (grid down, social unrest, natural disaster, economic collapse, etc.) are really only kidding themselves when it comes to defense. Even people who have gone out and bought guns in record numbers (3+ million sold in March alone…) usually just put those guns on the shelf and have no idea how to use them, how to clean them, or even how to carry them around in a safe and tactically useful manner.

On the psychology side, most Americans are kidding themselves when they imagine scenes in their mind of how things might play out in a true collapse scenario because they consistently make the mistake of believing that people will remain “polite” and “friendly” — these things are just fictional constructs of a civilized society… a system of social contracts we tend to follow when we choose to get along. But in a collapse scenario, these social graces can vanish in as little as 72 hours. Extreme hunger causes people to throw politeness out the window…

And once they do, the worst of humanity comes out. When you get right down to it, people are selfish, deceptive, back-stabbing schemers who will do anything — absolutely anything — to save their lives or save the lives of their own children. In the debate about whether people are inherently good or evil, make no mistake: In the right context of a peaceful, civilized community, people are inherently GOOD. But absent the constructs of law and order, nearly all of them toss morals, rules and ethics out the window and they quickly become a serious threat to non-family members. (People inherently protect their close relatives but consider non-relatives to be competitors or enemies. This “gang mentality” is true throughout humankind. Just study anthropology if you don’t believe me…)

Why the ugly side of humanity comes out

If you’ve never lived outside a protected, well-policed community in the United Sates, you’ve probably never seen what really happens when people lose it. I’ve seen it first hand, and it’s ugly. It will absolutely shock you what people are capable of once the fictional constructs of civilized society are taken away.

In seeing what may be coming in 2012 or soon after, I want NaturalNews readers to be safe. I am very, very concerned that many people have greatly overestimated their preparedness in terms of personal safety, home defense, family protection and even community defense.

So I’ve connected with some of the top experts and information sources on this very topic, and I’ve compiled an extremely information-rich, point-by-point presentation on all this that I’m going to give LIVE on May 8th. You can join in and watch it via the internet, and you can even ask questions in real time.

There are a few hundred seats remaining right now for this event, and you can register now at:
www.HealthRangerLIVE.com

This course covers areas I’ve never talked about before, including a rational, highly educational talk about firearms (without all the hunting culture or macho B.S.), perimeter defense items, early alert systems that are super cheap and yet very effective, how to protect your home, apartment or ranch. How to avoid the big mistakes people make when thinking about defense and preparedness. How to HIDE your valuables, how to AVOID getting caught up in violent situations. How to HELP your local community restore law and order, safe travel and a free market exchange area.

This goes way beyond food, medicine and barter items. This is about how to keep yourself (and your family) in one piece even when faced with situations such as:

Again, I’ve never covered this before, and it doesn’t give me any particular pleasure talking about all this, but in a world where we are clearly headed into some rather “uncertain” times, we all need to be physically prepared to hold our ground, protect our loved ones and protect our private property. That’s why I teach in this LIVE presentation, which you can view by registering now at:

The big mistake that “preppers” are making right now is buying up large quantities of stored food, ammunition, emergency medicine, radios and other gear — and then forgetting about it!

I cannot emphasize the foolishness of such an approach. I can assure you, because I’ve heard this first hand, that there are huge numbers of less-than-ethical people who aren’t buying anything except a rifle and some bullets. Astonishingly, their entire “preparedness plan” consists of — and these are their own words — “Using our guns to acquire everything else we need.”

That means, of course, going from house to house, community by community, raiding, looting and stealing from anybody who has something they want. Seriously, this is the plan! One guy I know of, who is a respectable professional in society today, is also a pilot. When I asked him if he was going to buy a small plane so that he could fly out of Dodge when the SHTF, you know what he told me? “Nope, I’m just buying another pistol. With the pistol, I can GET a plane.” (Wow. I was just shocked to hear it.)

This psychology is rampant across the culture. It’s far worse than you think. There are huge swaths of individuals and groups who are locked and loaded, ready to simply take what they want by force once there is an absence of law enforcement in their area. This is the “gang mentality” that is very real, and very deeply ingrained in the minds of many people across America and the entire world.

Defending yourself against these armed gangs isn’t too difficult, it turns out. Even armed gangs are looking for easy targets that reduce their risk of injury or death. All it takes to encourage a typical armed gang to go somewhere else is to send some lead flying in their direction, especially if it’s from more than one person in your household, community or town. But doing that requires a set of skills, an early detection system, and some basic knowledge of firearms and ammo. As most NaturalNews readers lack this information, I have decided to present it in a non-hunting, non gun culture way, from one reasonable person to another, where each of us is a law-abiding, ethical citizen who simply wishes to protect our families, communities and private property from looters and thieves.

I hope it never comes to this. I really do. But I’m also not so naive that I think we can just call 911 and expect the local government to send guys with guns to fight on our behalf. That might work in a peaceful city, but once things break down, dialing 911 is about as useful as wishing on a falling star.

Restoring law and order, protecting your lives and property

So I’ve just decided to lay all this out for you in a compact, information rich format. For the last several years, I have received considerable training in these areas, and I even received an award from the Chief of Police of Tucson, Arizona for my work in support of local law enforcement there. I’ve learned techniques and tactics from former active duty military, former law enforcement and former FBI agents. One of my sources is even a retired intelligence officer with a U.S. agency that “does not exist.”

What I’ve learned in all this has been compiled into a LIVE presentation being given one time only, on May 8th, 2012. There, I will share everything I know about how to defend yourself, your family, your home and your community. The information is blunt, uncensored and quite literally priceless.

If it’s sold out by the time you read this, we will have it offered as a downloadable video, but the price will be substantially higher than our LIVE event (which is very, very affordable). I want as many people to have this information as possible because I know it will save lives and help stop looters and thieves.

This is all about restoring law and order in almost any collapse scenario, so it’s priceless information that you’d be very hard pressed to compile from any other source.

Remember, Americans are arming in huge numbers right now. Last year saw roughly 15 million guns sold, which broke the all-time record. And 2012 sales will probably hit 25 million or more. People are arming up like crazy, and regardless of what you think about firearms or gun control, the fact is that probably half of all adult Americans already own at least one gun. Most of those guns will be used in a lawful, ethical way to defend property and protect communities, but there are always a few criminals who will try to use them for nefarious purposes — to steal, loot, and generally cause mayhem. This course is designed to help you avoid being victimized by those few bad apples. It’s designed to keep you safe no matter what goes down.

It’s designed, in other words, to make sure you have the opportunity to grow your own food, plant your heirloom seeds, contribute to restoring society and teaching others how to live long, rewarding lives in whatever era lays ahead. This course is about making sure the GOOD people (liberty and law) can protect themselves from the BAD people (corruption and criminality).

I will probably never present this information again. If you want to learn this today, from a trusted source who you know doesn’t beat around the bush, register now and get ready to be stunned by what I’ve put into this live presentation. It will leave you a bit shocked but extremely well informed.

Stay safe. The world you live in right now is subject to change without notice.

P.S. Everything presented in this course is 100% LEGAL and lawful in Texas, where I’m giving the presentation. This is not about doing illegal things in any way. It’s about actually restoring law and order and protecting yourself, your family and your community. This information focuses on DEFENSE, not OFFENSE.

How to Survive World War 3: Prepping for an Off-Shore Conflict