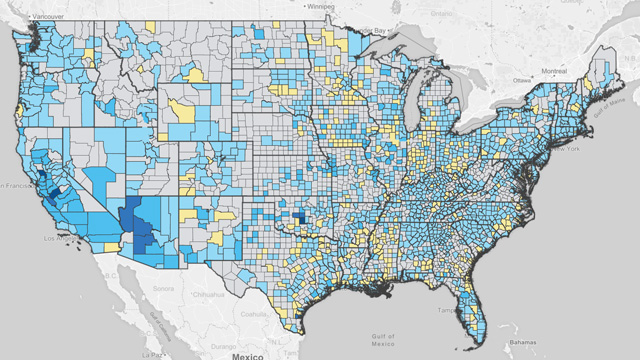 An Environmental Working Group review of government water analysis data reveals that 75% of drinking water in America is contaminated with cancer-causing hexavalent chromium (also known as chromium-6). In a widely publicized report, EWG warns that 200 million Americans are right now being exposed to this toxic chemical in their water.

This is on top of our own efforts at EPAwatch.org where my lab tested hundreds of municipal water samples from across the country and found high levels of lead and other heavy metals in 6.7% of samples.

Yet another problem is hexavalent chromium, which is used in industrial operations such as chrome plating and the manufacturing of plastics and dyes. It has been linked to liver and kidney damage in animals as well as to leukemia, stomach cancer, and other cancers. Hexavalent Chromium has been found in the tap water of thirty-one out of thirty-five cities sampled. Of these cities, twenty-five had levels that exceeded safety standards. Sadly, even if your water is not contaminated with any of these substances, it may still be unsafe to drink. – The Great American Health Hoax – The Surprising Truth About Modern Medicine by Raymond Francis

As Donald Trump said recently at a rally in Michigan, we used to make cars in Flint and you couldn’t drink the water in Mexico. Now the cars are being made in Mexico, and you can’t drink the water in Flint. Nor can you safely drink public water almost anywhere in America, as it’s almost universally contaminated with chromium-6, heavy metals or other toxic chemicals.

This doesn’t even cover the deliberate poisoning of public water systems with fluoride, a neurotoxic chemical purchased in bulk from Chinese chemical plants (or sometimes acquired as a waste product from fertilizer manufacturing factories). Fluoride is dumped into public water supplies under the quack science claim that every person in the nation is deficient in fluoride — a blatantly false and highly irresponsible claim. In reality, many children suffer from fluorosis, a dark mottling and discoloration of the teeth caused by too much exposure to toxic fluoride.

Avoid fluoride. A highly toxic metal, fluoride accumulates in certain areas of the brain (the pineal gland and hippocampus) and has been shown to significantly lower IQ and interfere with memory and complex brain functions. Studies have shown that even concentrations of 0.5 parts per million (ppm) can damage cells and microvessels in the brain. Yet, 60 percent of our public drinking water is fluorinated at higher levels of 1 to 1.3 ppm. – Dr. Blaylock’s Prescriptions for Natural Health – 70 Remedies for Common Conditions by Russell L. Blaylock

What’s astonishing in all this is just how quickly America’s infrastructure is collapsing into “Third World” status under the rule of a corrupt political establishment. The education system has become nothing more than a propaganda indoctrination system; the food supply is inundated with unlabeled GMOs and toxic herbicides like glyphosate; and now the water is too toxic to drink almost everywhere.

California, a corrupt regime run by incompetent communists and “progressive” idiots, went right along with the toxic chemical industry to allow an astonishing 500 times higher levels of chromium-6 than what’s known to be safe.

From the EWG report:

The California scientists based their public health goal of 0.02 parts per billion solely on protecting people from cancer and other diseases. Public health goals are not legally enforceable, but legal limits are supposed to be set as close as possible to health goals “while considering cost and technical feasibility.”But the California Department of Public Health relied on a flawed analysis that exaggerated the cost of treatment and undervalued the benefits of stricter regulation, and adopted a legally enforceable limit of 10 parts per billion.

But, wait… according to the lunatics selling contaminated “superfoods,” chromium-6 is all just fine because it’s “naturally occurring”…

Adding even more lunacy and catastrophic humor to this issue, there exist some highly unethical superfood / raw foods companies that claim eating heavy metals is GOOD for you because lead, mercury, arsenic and cadmium are all “naturally occurring.”

Well then, according to the EPA, chromium-6 causes cancer and it’s also “naturally occurring.” I guess that means you’re supposed to drink more, right? From the EPA website:

Chromium-6 occurs naturally in the environment from the erosion of natural chromium deposits. It can also be produced by industrial processes. There are demonstrated instances of chromium being released to the environment by leakage, poor storage, or inadequate industrial waste disposal practices.

Who needs to drink the Kool-Aid when you’ve got super nutritious VitaChromium Six on sale at Whole Foods?

If you aren’t filtering your water, you’re committing chemical suicide

After becoming aware of all the toxic metals and chemicals in the drinking water these days, if you aren’t filtering your water with a reputable, lab-verified water filter, you’re basically participating in the chemical suicide of humanity.

Fortunately, the solution is very simple: Buy and use a reputable water filter!

At my online store, we sell the lab-verified Big Berkey gravity filter, which also doubles as an emergency system requiring no electricity whatsoever.

I’ve also personally tested and helped launch the AquaTru countertop filter, which removes chromium-6 and hundreds of other toxic chemicals and heavy metals.

Finally, if you want to test the heavy metals in your own water (or your supplements or even your hair!), check out this heavy metals test kit we offer, which analyzes your sample for 20 elements, including heavy metals and various trace minerals. (The kit does not, however, quantitate chromium-6.)

BOTTOM LINE: When illegal aliens walk across the wide open border and enter America to collect unlimited free entitlement benefits, there should be a sign posted that reads, “Welcome to America. DON’T DRINK THE WATER.”