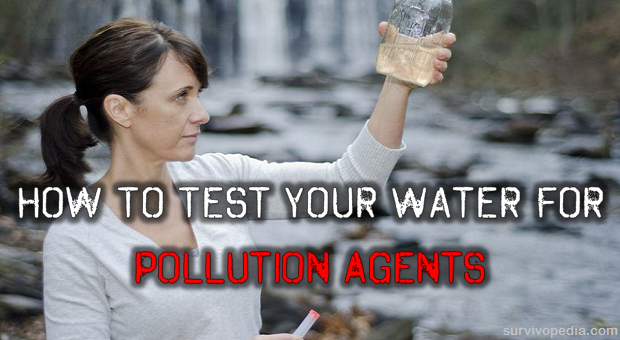 When SHTF, you may need to leave quickly. That means that you may need to travel light. You probably won’t be able to carry much more than a couple of days’ worth of water. In that case, you’ll need to find a viable source of drinking water, but you need to know how to test water for pollution agents.

For that matter, it’s a good idea to test your own home drinking water periodically just to be on the safe side. If you have well water, pollutants can creep in due to factors outside of your control such as draught, flooding, earthquakes or deep drilling by oil or gas companies. The Earth shifts beneath us on a regular basis and those shifts can cause changes in your water quality.

In our previous article, Top Killing Agents Hidden in Your Water, we discussed some of the most dangerous contaminants that are often present in water. We also talked about what they can do to you, so if you read that article, you’ll understand why it’s so important to make sure that your water doesn’t contain any of those pollutants.

In this section, we’re going to discuss a few ways that you can find out what’s in your water and even discuss a few signs specific to certain chemicals or minerals. If you have city water, there are many different pollutants in that water.

Chemicals are added to make the water “safe” to drink or to add minerals such as fluoride to your diet because the government thinks that it’s in your best interest. Out-of-date plumbing, leaky sewage systems and antiquated water delivery systems and filtration methods can also be sources of pollution.

Water tests of municipal water supplies have found pesticides, pathogens, carcinogens, arsenic, industrial chemicals and prescription medications in water that has supposedly been purified and deemed safe for drinking. Yuck.

There are standards in place that municipalities have to meet, but those standards are pretty low. Combine that with the fact that most water treatment facilities are poorly equipped to handle industrial spills or the daily pollutants released in industrialized, heavily populated cities and you have a polluted water source that’s been deemed safe to drink even though it isn’t.

Vulnerable people such as pregnant women, people with immune issues, small children and the elderly are most at risk, though the right pathogens will make anybody sick.

Many of the same risks apply to waterways such as the ocean, lakes, ponds, rivers and streams. Sewage leaks, animal feces/carcasses and farm and industrial plant runoff often makes its way into open water.

Water can be polluted with all kinds of toxins, bacteria, protozoa, viruses, parasites and chemicals that can cause immediate illness, death or long-term, chronic illnesses such as cancer, neurological disorders and kidney disease. Ones that you should be particularly worried about include:

This isn’t an inclusive list but it’s a few of the top bad-asses that you have to worry about.

So how do you know if water is safe? Whether it comes from your faucet or from a pond or creek that you’ve stumbled across, we’re going to tell you how to determine if water is safe to drink.

Let’s start by testing your water safety knowledge. If you come across two bodies of water, one that is crystal clear and free of plants and algae, and one that is not-so-clear and full of water plants and fish and has a few bugs swarming around, which one would you drink? The logical answer is the clear water, right? Wrong.

Plants, animals and insects in water are a good sign that the water is well-oxygenated, has a healthy pH, is mineral-balanced and is (relatively) free of harmful chemicals. If you have to choose, brush the algae away, filter the water, drop in a purification tab and drink from that pond. Steer clear of the crystal-clear, bug-free pond.

Note too that if algae is the only thing in the water, you should avoid it, too – it could be tainted with phosphorus runoff. There’s no guarantee that the water in the dirty-looking pond is safe, either. It may still have parasites, bacteria or other hazards. It’s just the better choice of the two if they are your only options.

Some contaminants can be seen or smelled in water. For instance, sulfur smells like rotten eggs and may taste salty. It can be an indicator of certain bacteria in the water. Iron makes the water appear orange. Manganese in higher quantities makes water black or purple. Chlorine smells like bleach. Some parasites are actually visible, though many aren’t. The first thing you should do is look at the water and smell it before you drink it.

Water that smells or tastes like turpentine, gasoline or similar chemicals may be polluted with methyl tertiary butyl ether (MTBE) or xylenes. These are byproducts of oil, gas, paints, detergents and other chemical agents. Don’t drink it, even with purification tabs.

If the water smells or tastes metallic, it’s a pretty good bet that it’s got minerals such as mercury, lead, copper, iron, arsenic, manganese or zinc in it. Some are harmless in small doses, such as iron, but others such as lead, mercury and arsenic aren’t. Better to skip it.

Finally, if the water smells or tastes earthy, musty or like dirt, there is probably decaying organic matter in it. This is probably not a bad thing but it still tastes weird.

Unfortunately, there is no way to test for the stuff that will really make you sick – bacteria, viruses and parasites – other than to use a water test kit. There are several different types of these and you can get them fairly inexpensively – some run only $15 or even less. Some test for minerals and some test for harmful pathogens such as e. coli and salmonella.

There are field tests that you can get to test your water for pollution agents that you can toss in your bug out bag and I’d recommend doing so if you’re prepping for long-term, earth-changing events. After all, you can only store so many water purification tabs or pool shock. Remember though that water quality changes so you need to take other measures or repeat the tests periodically. Even then, the tests don’t cover everything but they’re a good start.

The most effective way to ensure that your water is safe to drink is to filter it, then boil it, distill it, or use water purification tabs or other methods to purify it so that you kill the bacteria and other nasties in it.

If you know of other good methods to test water for polluting agents, please share them with us in the comments section below.