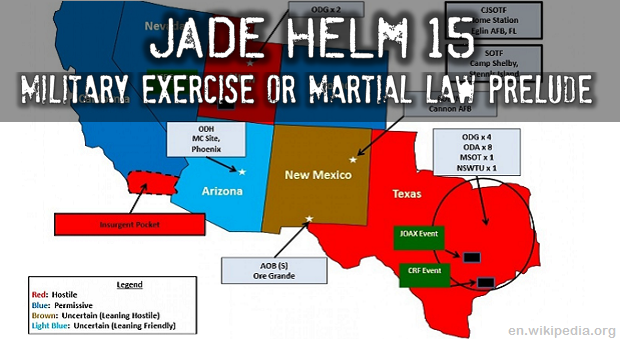 The alternative media, or at least the conservative alternative media, has been ablaze with reports of Jade Helm 15 lately. In case you hadn’t heard, Jade Helm is an upcoming military exercise to run from July to September. That in and of itself isn’t anything remarkable, as the military is always running training exercises of one sort or another. Unless they are engaged in fighting, they need those exercises to keep the edge.

But there are a number of things about Jade Help that are remarkable. First of all, it’s probably the biggest military exercise ever run on U.S. soil. Federal law limits what the military can do on U.S. soil and so most military training exercises are held on military bases. Yet this seems to be almost exclusively being run in civilian areas.

This exercise is being run by the Special Forces community, through the various branches of service and is ostentatiously an exercise in tracking and capturing terrorists who have crossed the border from Mexico into the United States. While a worthy training exercise, there are many who are questioning if that is the true aim of the exercise. Specifically, it has been mentioned by a number of people as a potential prelude to martial law.

Why Do We Doubt?

One thing that has slipped out is a map which shows Texas, Southern California and some other areas as “enemy territory.” While they love President Obama in Southern California, Obama has been against Texas from the start. The people of Texas, being who they are, have responded in kind and hold Obama in enmity.

Then there are a number of other “signs” that might or might not be ominous. Wal-Mart, which has an agreement with the federal government to work as the government’s supply network in times of disaster, has suddenly closed five stores, with almost no notice. The supposed reason of “plumbing problems” doesn’t seem to wash, especially when you consider how much the company is losing by closing those stores.

In addition, there have been convoys and trains of military equipment spotted en route to Texas. These include a UN convoy and a number of Turkish multiple rocket launchers hidden in the Texas woods.

All in all, these disjointed pieces of information could mean absolutely nothing or they could be the portent of something very serious that’s about to happen. The point is that we just don’t know. Few conservatives trust anything that’s coming out of Washington these days, considering how many lies Obama has told over the last six years. Even if he told the truth, nobody would believe him.

But Obama isn’t telling the truth, nor is the military. They are saying very little. Nothing is being done to dissuade the concerns of the people, other than the typical left-wing tactic of name calling.

Responding to the concern, Texas Governor Abbott has ordered the Texas State Guard, a totally state run organization, which has no connection to the Texas National Guard and therefore can’t be federalized, to observe the exercises, for the purpose of protecting Texans and their property.

The State Guard isn’t big enough to offer the U.S. Military much resistance if an attack comes, but they have the training to watch the exercises and their preparation, with the goal of finding any suspicious activity.

The military has responded to this, stating that they have no intention in allowing the Texas State Guard to monitor their activity. This has just increased the paranoia level, convincing more people that the federal government is up to no good.

The only way the target population can tell if the exercises are in fact exercises and not a prelude to war is to wait and see what happens. Once the exercises commence, it is easy to change them into a full-blown attack. All it takes is the order to fire.

With all that, it’s no wonder that Texans are taking Jade Helm seriously. Even the legendary martial arts champion and actor, Chuck Norris, has gone public, telling his Texan friends and neighbors (Norris lives in Texas) to be ready for a potential attack. Considering how level headed Chuck Norris is, that’s not alarmist paranoia, that’s prudent advice. Find out more about fighting like Chuck Norris here.

Fortunately for Texas, they have Chuck to help them defeat government forces… or is that just in the movies?

Oh, there are still plenty of sheeple who are in love with Obama and in love with big government. But other than Hollywood celebrities and college professors, both groups which are out-of-touch with reality, most Americans, especially conservatives and American patriots, see the federal government as the enemy.

This is a natural reaction to the federal government treating these same people as if they are the enemy. Returning military veterans are being treated by the government as enemy soldiers, having their rights stripped away by trumped-up charges of mental instability. Conservatives are being added to government lists as being potential terrorists, while true terrorists are being removed.

There’s something else going on in the federal government as well. Our country’s government is supposed to be “by the people and for the people.” But that is no longer true. Over the last several decades, the attitude of the government has changed from being public servants to being public masters. Historically, this is almost always a prelude to martial law and a police state. Read more about martial law here.

Is it paranoid to think that Jade Helm could be a prelude to Obama declaring martial law? No, I have to say it isn’t. While I have no idea what the government’s true plans are with this exercise, it may very well be to declare martial law and enslave the population. As long as that possibility exists, we must be ready.

So, what can we do? I think that both Governor Abbott and Chuck Norris were right. We should keep a close eye on Jade Helm and the military’s operations in conjunction with it. I’m not just talking about Texans, but every freedom loving American needs to be keeping their eyes open.

It is quite possible that something will happen in some other part of the country, which has direct bearing on the military’s training exercise. That information could be critical in saving the lives and liberty of those in the exercise zone.

The Second Amendment speaks of the need for a militia. This isn’t the military, as the framers of the Constitution didn’t plan on a permanent standing army. Rather, they envisioned the people themselves rising up to protect their homeland. That’s what a militia is. It consists of every able-bodied man, capable of bearing arms. I guess in today’s political climate that would include women as well.

I truly hope that Jade Helm ends up being just what they say it is; a military training exercise. But I am not so naive as to live by hope in what others might do, nor the nobility of their intentions. Therefore, I plan to keep my powder dry and my guns near at hand. If our progressive liberal government wants civil war, I guess they are going to get it.

We must be sure that we are not the aggressors. Our place is to defend our homes, our loved ones and our liberty; no more. No American should fire upon federal forces or military troops, except in self-defense.

Let the first shot be theirs, so the world may see that the people of these United States act in righteousness.