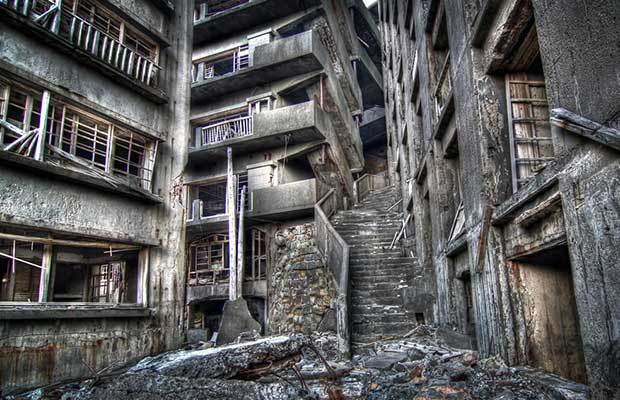 There is a mantra within the hallowed halls of prepper knowledge, lore and opinion that goes something like this. The only way to survive TEOTWAWKI is to find a hidden retreat far away from any city of significant size and live there as self-sustainably as possible year round. This idea of the survival retreat has been around for years and it is actually a lifestyle I aspire to for myself and my family. I dream of a fortified home in the woods, streams rolling through my mountain location, solar arrays, livestock in fences, wild game aplenty and wood burning stove goodness all around me. There is one major problem with this mantra though and that is the prospect of moving everything we have and living in a cabin in the woods is nearly impossible for the large majority of us.

If you accept the argument that the hinter boonies are your best chance of survival, then the flip-side of the mantra and conventional wisdom is that everyone living in or near the cities will die. It can give you the idea that you are doomed unless you are living in Northern Idaho, chopping wood for your stove and tending to your garden every day of your life. Is that the only choice we have? Does ultimate survival come down to either living in a small handful of states or you are screwed – no matter what? Is Urban Survival an oxymoron? If you aren’t one of the lucky ones who lives 2 hours away from the nearest Walmart are you doomed to die a horrible death? The real question for the majority of preppers is this; is Urban Survival possible?

The problem with surviving in urban environments

I will readily concede that you have problems living in urban environments that will make survival tougher. Larger cities have a higher population of people living in closer confines. This makes any available resources like food and fuel deplete much faster in times of crisis just because there is greater demand for these resources. Sheer numbers overwhelm the system more quickly and the panic associated with a larger mass of people spreads faster, it is more chaotic and violent. It would be like a swarm of locusts. 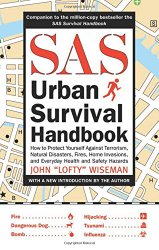 Urban environments are a larger risk for terrorist attacks because of the higher concentration of people and media attention. If you blow up a few buildings in New York you will cause a much bigger stir (and kill more people most likely) than blowing up the same number of buildings in Steamboat Springs CO. It is the same with virus or disease in that it spreads much faster in higher concentrations of people. Larger cities pose a larger risk to a numerically higher number of lives so risk to your life is higher.

Additionally, urban environments for the most part have limited natural resources unless you consider buildings, parking lots and concrete or asphalt natural resources. Sure, there are trees in cities, even New York has Central Park, but can you imagine how long it would take for Central Park to have every single one of its trees chopped down if some catastrophe happened and people needed wood fires to keep their families alive? Some major cities are built along rivers, but the water is usually so polluted you wouldn’t want to bathe in it much less try to eat anything that lived in there. Along with that lack of natural resources, there is not an abundance of good soil for growing food, at least not in quantities sufficient to support the populations of those cities.

I am not saying that you have a better chance for survival in cities, but I think we should be looking for options in every prepping scenario.

Are there any advantages to urban environments?

Yes, there are definite problems with urban survival chances, but do cities offer any advantages at all? I think you could find some benefits if you know what you are looking for. For starters, cities offer much more secure buildings than rural environments. Large concrete buildings are much better at stopping bullets than the walls of any suburban home. I think cities would offer you a greater supply of materials to use in a worst case scenario as well. If things got so bad you had to outfit your vehicle, Ala Mad Max, all of those spikes and metal would be much easier to find in cities. 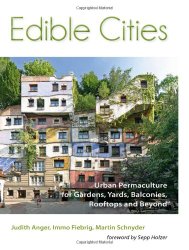 There are places to grow food in cities.

Scrap metal, fencing, chains, wires and building materials as well as spare auto parts (batteries and tires) would be much easier scavenged in a city. Try building a fence out of trees or a coconut battery… Yes, this is a worst case scenario but I wanted to at least discuss some of the potential upsides as opposed to simply saying if you live in the cities you will die. Cities offer a lot of advantages in the form of security and observation simply because you have tall, semi-hardened structures. You can position look outs on 4 buildings a few blocks apart and using simple FRS radios, command a huge area.

What do you need for urban survival?

So now we have discussed some of the drawbacks and possible resources you could take advantage of, what is really needed for urban survival? The simple fact is that you need the same things for survival in the cities as you do in the suburbs. The difference is finding some opportunities you might be able to use to your advantage if you find yourself stuck in the city after a disaster.

Food is a constant survival need and I recommend stocking up as much food that you normally eat as possible and augment that with some amounts of long-term storable food like freeze-dried food or MRE’s. What will you do when your food supplies are gone? You will need to do what the people in the burbs are doing and that is bust up some ground and get your food growing as soon as possible. As a backup I recommend having a supply of Heirloom seeds with which to do this, but starting now will give you the best chance of long-term urban survival. That is assuming your city wasn’t nuked of course. 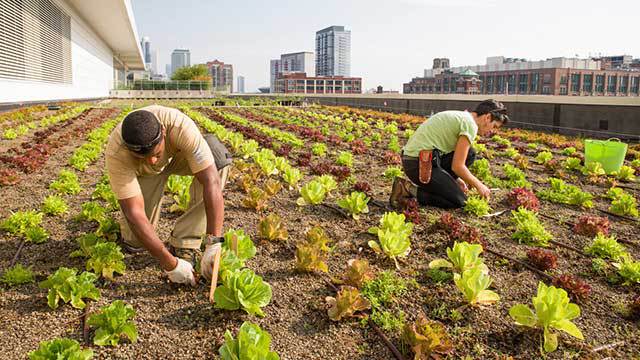 In a grid-down scenario rooftop gardens may be necessary for urban survival. 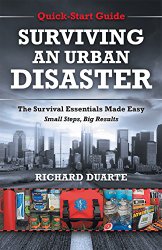 Food co-ops are a great idea, but you will have to rely on yourself for food in a survival situation. Roof gardens would be one way to grow vegetables. Could this feed a whole building? I don’t know but it is an option you have in the city that could allow for food production within the safety of your higher vantage point. Another option that the city affords is a high number of homes in a relatively small area. Each of these homes may have food or supplies after a collapse (assuming of course nobody is living in there) that could be available for scavenging. Scavenging is a polarizing subject I understand, but would be a possibility in a worst case scenario.

Rainwater collection might be a little harder in the city as most buildings have flat roofs that house equipment, but if you have a flat surface that collects water that can be diverted into tanks, it should work the same as anywhere else. Another aspect of city living is that almost every building has water sprinkler systems and these can hold many thousands of gallons of water that should be safe for drinking or can be filtered with a good gravity filter. The trick would be to find the main drain valve which is commonly found in a stairwell on the same floor as the fire sprinkler heads that it supplies. The water may be draining outside so don’t turn that knob unless you know where the water will be coming out. Optionally, some buildings have water tanks right on the roof.

Fire hydrants also are a good source for water and if you find a low hydrant (lower elevation) you may be able to get millions of gallons from that source alone.

This to me seems to be one of the benefits of urban environments that of course is weighed against the risks. There should be an abundance of shelter options for you but safety will be an issue here. In a TEOTWAWKI scenario, many people will leave, many could die. There should be available shelter that you can find. I would try to get up as high as possible and work on fortifying my entryway so that I could really make it difficult for anyone to get in. I would look for warehouses with heavy metal doors before shops with glass windows, but you may have to look at several places before you find a suitable location. 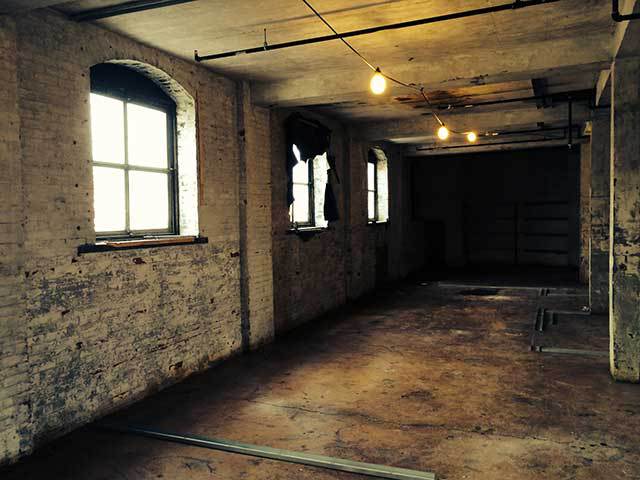 It aint pretty, but it could keep you alive.

Shelter in this regard is primarily going to be focused with keeping you out of the elements initially. For something more permanent, I would be looking to live with a larger group of people for common defense and shared work duties. Could these be the people currently living in your building? Could you control access to your building now or after some fairly simple fortifications?

Safety of the people in your group will be extremely important and this will rely on having observation at all times, a good communication system and a plan to deter threats. Solar panels situated on the roof of buildings could keep your power supply from being noticed (unless there is someone in a higher building) from the ground and reduce the risk of theft. 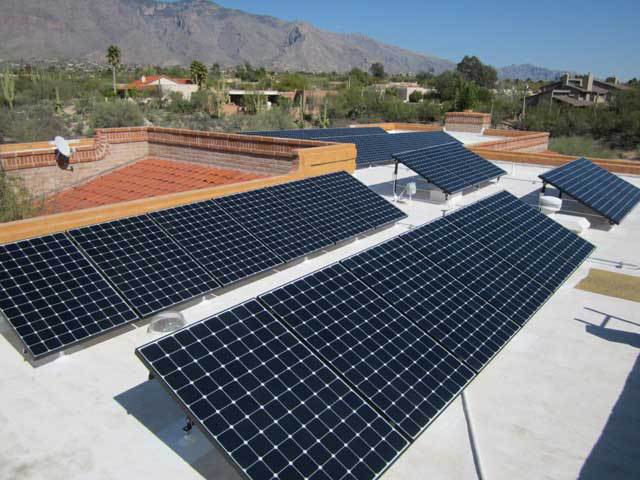 Solar panels mounted to the roof will reduce risk of detection or theft.

Access control to stairwells could prevent attackers from sneaking up unannounced. Barricades could be easily constructed from old furniture or equipment, even sections of fence. The height of the buildings will give you vantage points and could allow you to funnel any traffic into one location that could be manned by a couple of people with radio access to a spotter on the roof.

Would all of this be possible? It would depend on the disaster, where you are, what you have with you and a lot of other things. Would urban survival be more difficult? Maybe, but I don’t think it is hopeless. Unless there was some serious issue driving you out of the city, it may be safer to stay while everyone leaves and tries to survive on the road or in the woods.

I don’t think cities will be completely devoid of people in a SHTF event. I think some will find a way to survive as humans have for a long time.

One thought on “Is Urban Survival Possible?”