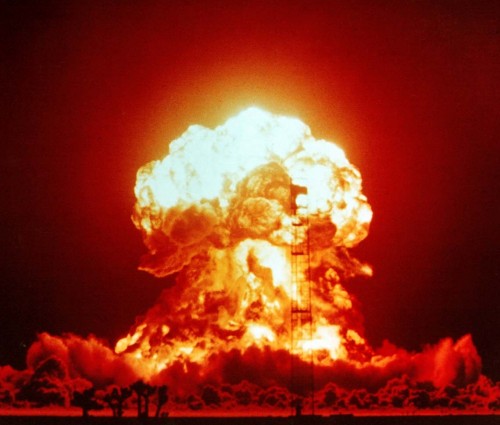 The beginning of 2016 revealed what some have known for quite some time – financial markets are an epic disaster just waiting to be realized. With stock indexes having rebounded somewhat since the initial meltdown, financial pundits and mainstream analysts would have us believe that the worst of it has passed. But don’t be fooled, warns Economic Collapse Blog publisher Michael Snyder in his latest interview with Future Money Trends, because we’re still in the early chapters of what may be the most devastating financial, economic and monetary collapse in history:

A total of $16.5 trillion dollars had been wiped out from stock markets around the world… that doesn’t even count bonds and other things. So we have seen this massive amount of wealth wiped out globally… almost as much as the U.S. national debt.

Of course, the past few days we’ve seen a bounce back… markets never go down in a straight line… If you go back to 2008, the two best days in terms of a point increase in U.S. stock market history were right in the middle of the Crash of 2008… just because stocks go up for a day or two does not mean the crisis is over.

In my perspective we’re still in the early chapters… all of the red flags are still screaming that a lot more is to come… the entire global economy is imploding.

As the collapse takes hold we can expect unprecedented maneuvers from our monetary masters. With central banks preparing to introduce negative interest rates, for example, savers and bank account holders will actually be paying for the privilege of keeping their money in the bank. The likely response, as we witnessed with a run on personal safes in Japan, is that people will simply take their money out of the bank and hold it in cash.

But such a work-around will be short lived, explains Snyder, because they’ll simply outlaw certain cash transactions or ban them altogether, which is, incidentally, the very recommendation we’ve heard in recent weeks from large financial institutions and ‘renowned’ economists. Of course, they argue that banning cash will stop drug dealers and tax dodgers, but as Snyder explains, such a ban is being specifically designed so that they can take total control of not just our currency, but every aspect of our lives:

This sets up the kind of scenario where all of a sudden the government becomes the gatekeeper… they can say ‘alright, if you want to use the system, then we can put some conditions on you for using the system. You’ve got to comply what we’re demanding of you or else you can’t have a bank account, you can’t get a job, you can’t buy, you can’t sell, you can’t participate in this electronic digital system.‘

We can only speculate that control of such a digital currency system will necessitate the implementation of ‘beast technology’ that may include forced embedding of tracking chips into the general populace. That may sounds conspiratorially crazy, but so too did the notion that physical cash will be banned around the globe… until a few weeks ago.

But never mind that global trade has collapsed or the widespread job losses, because the average person on the street really won’t believe it until the stock market tells them something’s wrong.

That day is certainly coming. The only question is, who will be blamed when it does?

We all know it could not possibly have been the machinations of central banks, Western governments and entrenched financial firms that are responsible for global economic malaise.

As Michael Snyder notes, there is a huge wild card in the middle east right now and the very scapegoat the elite need to set this whole thing in motion is just waiting for the green light:

The Russians have already warned Turkey that they are willing to use tactical nukes to keep forces away from Damascus… so the Russians have nukes… Saudi Arabia has nukes… And many people believe Iran already has nuclear weapons.

So we’re talking about a situation where we can potentially see nuclear war in the middle east, at least to a limited degree.

What would that do to the global economy and financial system?

This is a huge wildcard.

It’s something to keep an eye on…

Make no mistake, those who have orchestrated the fleecing of America, Europe and the rest of the world have absolutely no intention of admitting they are responsible for the disaster to come. As Future Money Trends suggests, a tactical nuclear war would be the perfect out for central banks and Keynesian economists.

One way or the other, regardless of the catalyst, the system as we know it today and how we operate within it is about to change drastically.

Video: Financial Analyst: “We Are Very, Very Close To A Major Event Here”