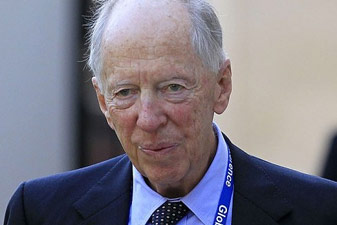 Editor’s Note: Billionaires, hedge fund managers and other “elites” in the know are quickly snatching up land and secret hideaways around the world in anticipation of a serious crisis. As you read the following report from Paul Joseph Watson of Infowars pay attention to where Lord Jacob Rothschild has put his focus. It’s no longer about making money for clients, but rather, protecting and preserving their wealth from the coming destruction of our financial, economic and monetary systems.

Lord Jacob Rothschild has warned investors that the world is mired in the most dangerous geopolitical situation since World War II.

The 78-year-old chairman of RIT Capital Partners, a £2.3bn trust, used the organization’s annual report to caution savers that the focus of the firm would be the preservation of shareholders’ capital and not short term gains.

Rothschild said that “a geopolitical situation perhaps as dangerous as any we have faced since World War II” has created a “difficult economic background” of which investors should be wary.

Rothschild, whose business associates include Warren Buffett and Henry Kissinger, blamed the fraught climate on, “chaos and extremism in the Middle East, Russian aggression and expansion, and a weakened Europe threatened by horrendous unemployment, in no small measure caused by a failure to tackle structural reforms in many of the countries which form part of the European Union”.

“RIT is popular among private investors thanks to its excellent track record and its conservative approach to conserving capital,” notes the Telegraph’s Richard Dyson. Rothschild and his daughter Hannah jointly own shares in the trust worth approximately £160m.

Rothschild’s warning follows reports from January’s Davos Economic Forum during which it was revealed that the wealthy are purchasing secret hideaways in remote locations in order to escape social upheaval and possible riots.

Economist Robert Johnson made headlines when he divulged that “hedge fund managers all over the world….are buying airstrips and farms in places like New Zealand because they think they need a getaway.”

Johnson cited income inequality and the potential for civil unrest and riots as the reason for the panic.

“A lot of wealthy and powerful people are quite afraid right now – they see us on an unstable trajectory,” said Johnson. “As the system doesn’t have proper resources, as it doesn’t represent people, things are getting more and more dangerous as say Ferguson, Missouri brings to bear.”

Realtors in New Zealand subsequently confirmed the flight to safety by the elite, noting that “paranoia” and concerns about personal safety and global crises were driving the trend.