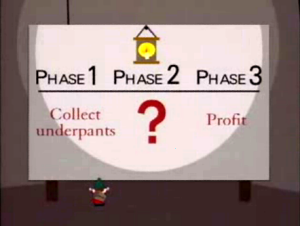 As many of you probably know, I’m not a big fan of the whole “Bugging Out” thing, or remote emergency bunker locations. Most people espousing this strategy are trying to have their cake and eat it too. They live somewhere that they know isn’t going to to do well in a SHTF situation. Usually they are there because they make lots of money doing something that probably won’t survive TEOTWAWKI. The siren call of easy paychecks and evenings spent watching American Idle are too hard to resist.  And I understand, I do. I love Thai food and salsa bands and public transportation as much as the next Millennial. But I also love that for practically any SHTF event other than a direct hit by an F5, I don’t have to bug out anywhere. I’m already in my bugout location, 7 days a week.

Now, that said, I do in fact have a bug out location of sorts. My TEOTWAWKI crew has a doomstead on a 5 acre plot, a few hours away from where I’m living now. We have grand plans for that plot of land, but right now we’re all a bit scattered. We all had an excess of debt and a paucity of skills to make a good go of things when the land was acquired 5 years ago. So we went our ways, to pay off debts, learn some trades and make babies. We got the house built. It’s an Insulated Form Concrete house, bermed on 3 sides.  One family was even living in it for a couple of years, then a spring storm and some poorly placed hills of construction dirt flooded it.  Have you ever tried to dry out a subfloor in a concrete bermed house? Yea, it’s been a 2 year project. But it’s nearing the end. The arable land has been covered in an oat/clover mix for the past few years. That should have helped it recover from the years of row cropping.

It has always been the plan for some number of our crew to make a living off the Doomstead. Eventually, ideally, we’re all getting benefits from it. That way it’s not an empty bunker waiting around for thieves to rob dry. It’s a living, growing, active part of our SHTF strategies. Growing food for the local markets seemed like a likely option. Storage for our woodworker to dry his board stock seemed likely. A big wood fired oven. Perennial crops. Things like that initially.

We’ve all got various amounts of practice growing food at this point. I’ve definitely taken the lead in this area, with the most square footage in cultivation and my foray into the farmer’s market. It’s gotten to the point where I really feel like the only way I’m going to learn more at this point is to actually do it. Actually grow food, for real people and see how things go. And that itch has been growing stronger. I worked for a few years running my own company and my own business, before starting this corporate position I’m enjoying now.  Health care was a big plus, and steady paycheck. But really, the appeal is fading.

Is Calamity going back to the land? Yes, like a shiftless hippy, I’m preparing my family to leave my shiny corporate job. The key word there is preparing, because I can’t do anything without first prepping. Financial prep is high on the list. Lifestyle prep is the other big one.  Even living as we do in a small rural town here, trying to make a living as a farmer will mean large changes to our lifestyle and routines.  Those espousing the Bug Out plan or emergency bunker would do well to consider this. If they think they are going to show up in the country side one day and survive well past their initial 3 months of stored food, they may be fooling themselves.

Financial Prep – 3 months worth of expenses in savings, would be ideal. We’ve got our New Years resolution for our budget and savings. We’ll see if we make it as quickly as I want to. I may have to stay the course through the summer and I’ll miss the growing season and opportunities for this year. There are some advantages to a fall start though, so that would remain an option.

Bye-Bye cubical-ville – I’ve been keeping my body in proper shape, so that a switch to a physical occupation shouldn’t break me. In fact, I’m actually looking forward to the physical workload. I get antsy in my cube, even after changing to a standing cube. Again I’m reminded of those hanging their hopes on remote bunkers and some magical future where their beer gut won’t be a liability and ticking time bomb of death during a time of stress.

Hello Veggies – Vegetables will be the backbone of my initial plantings. There are a few nearby farmers markets we can get into. The first year I will be happy if the vegetable money covers some of the money I expect to have to put into this venture. Both hubby and I will need “off farm” or “off doomstead” paychecks coming in for the first year or two. Fruits are part of the longer term plan.

Step 3: Profit – I just had to put that in, I’m sorry. I’m hoping we make some profit, probably not in the first few years, but it would certainly be nice if we could get things to the point where a couple of people in our crew could make most of their yearly money from the doomstead. But it’s not like we’ll be selling the place if that’s slow to materialize. It may mean a lower standard of living than most Americans are comfortable with, it is only vegetables after all. I’m a doomer though and I figure in another decade most everyone is going to be living with a lower standard of living than what we find ourselves accustomed too. I like to be a leader.

It should make for an exciting year, or two. I imagine I’ll share thoughts and tidbits. Anyone feel like you are living on your doomstead? How are you integrating food production and revenue streams? Shout out in the comments!

One thought on “Making a Living on the Doomstead”