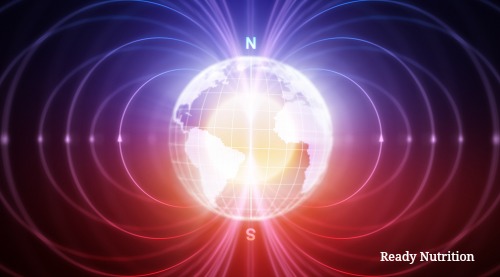 With all of the horrific weather anomalies, and the increase in earthquakes and volcanoes over the past six months…pronouncing themselves especially just in the past week…there is a cause for concern.  In the article, “Earth’s Magnetic Poles Show Signs They’re About to Flip – Exposing Humans to Radiation and Planet-Wide Blackouts,” written by Kastalia Medrano of Newsweek, NASA finally admits to a long-time fear – the Earth’s poles are close to shifting.

Here is an excerpt from that article:

“Historically, Earth’s North and South magnetic poles have flipped every 200,000 or 300,000 years—except right now, they haven’t flipped successfully for about 780,000 years. But the planet’s magnetic field is at long last showing signs of shifting. NASA”

“That devastation could arrive through multiple avenues. The combination of powerful space particles, like unfiltered solar rays, cosmic rays and ultraviolet B rays (the stuff your sunscreen bottle warns you about), would smash through our battered ozone layer and lead us the way of the dinosaurs.”

Why Is This Happening?

As you will read, the earth’s molten core of iron and nickel is beginning to leach out, affecting the magnetism of the entire earth.  Nothing about wildlife was mentioned in the article, but I point out this could very well explain some of the strange and bizarre behavior we have been witnessing regarding animals worldwide.

So, what can we do about such a thing?  I highly recommend reading the article.  It explains that with a magnetic shift we could see radiation levels increase around the globe, and several scientific firms suggest that parts of the planet could become uninhabitable, and at least inhospitable.

I suggest visiting Cresson Kearney’s site that I have recommended repeatedly, for the book “Nuclear War Survival Skills.”  You will be killing two birds with one stone: you should already be taking steps in case a nuclear war breaks out, as tensions with North Korea are high, and Russia and China are not our buddies, either.  Kearney diagrammed and detailed the levels of thickness and materials used for shelters, both home-expedient and those constructed for the specific purpose.  It also gives all the information you’ll need on radiation itself.

I also did a few articles in the past on radiation-removing supplements and herbs, such as zeolite clay, chlorella, and spirulina.  Along with Potassium Iodide supplies, it would behoove you to stock up on these materials.  A survey meter (Geiger counter) would be invaluable, as well as individual dosimeters.  Don’t smirk: you can still obtain them, and you should.  Also, while there’s still the time, I advise building a Kearney Fallout Meter from materials you can pick up at the grocery store and hardware store.  The complete plans for it are available on the site I mentioned above.

Advanced Tactical Gas Mask – Are You Ready for a Biological, Nuclear or Chemical Attack?

The NOAA and NASA websites are excellent sites for gathering information about what is currently happening.  In addition, as I have mentioned before in other articles, that military Lensatic compass would be a plus.  If and/or when the poles do shift, electronic equipment such as digital compasses and wrist computers might not function, but the Lensatic compass will be going wild.  As a forethought to such, I strongly advise obtaining maps of your immediate area…good terrain-featured, topographical maps…the kind that gives landmarks you can find with your eyes.  Terrain association is an important skill.  If you’ve ever busted a compass and cannot verify the azimuth you’re walking on…the ability to see the terrain and match it to what you see on the map is invaluable.

That will get you started if you haven’t already begun.  In this case, an ounce of prevention is worth more than a pound of cure…it can be worth much more than that.  Remember Aesop’s fable of “The Grasshopper and the Ant,” and if you have never read it, now would be a good time to print a copy and keep it where you can read it from time to time.  Herein lies the conundrum, for only the wicked flee when none pursue…but also, the wise saw trouble and took cover, while the foolish went on and was destroyed.  There is a balance for both, and (to paraphrase the Rolling Stones) time is on your side.  For now, if you make the most of it.  Stay in that good fight!

Panic Buying Grips America Ahead Of World War III: “Never Seen It At These Levels… We Can Barely Keep Up” Says Leading Preparedness Distributor