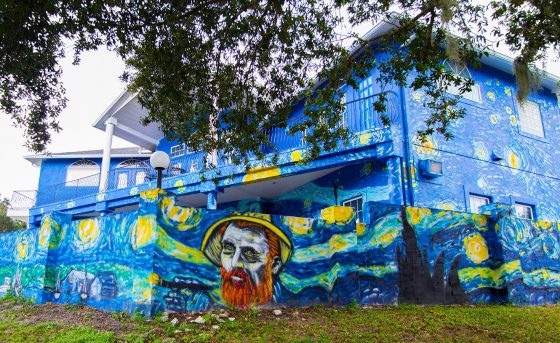 Nancy Nemhauser and Ludomir Jastrzebski were fined $100 per day for the crime of painting their home and property fence like a Van Gough piece of art. The mural is stunningly artistic, but the city is basically claiming Nemhauser and Jastrzebski don’t own their home by fining them over $8000.

The daily fines will continue until the painting, an homage to Van Gogh’s “Starry Night,” is removed from private property. Mount Dora, Florida officials say the mural violates the city’s sign ordinance. The homeowners have been fighting the city for months to keep the mural on their home. But should the courts (owned by the government) declare the mural removed, it means the homeowners don’t own and cannot do with their property as they see fit.  They may only ask permission to alter government property. The dictatorship many fear is already here.

“It’s an artistic town and here we are fighting the city for this art mural,” said Richard Barrenechea, the artist who painted the mural. “I hope a lot of people come tomorrow to see it and we find more supporters.”  Art enthusiasts getting ready for this weekend’s Mount Dora Art Festival. Art enthusiasts have wide-ranging opinions when it comes to the mural. “It’s beautiful,” said Rosemaire Gomez. “I love it. It’s heart. They [the city] shouldn’t have a problem with it.”

The Mount Dora Art Festival starts Saturday and runs through Sunday. As for the mural, the homeowners are expected to file a brief to appeal the city’s fine.