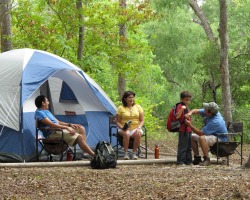 Many people think their most important asset after TSHTF is their weapons and ammo, or their food stores, or their ability to acquire clean drinking water, but I would argue that the most important asset will be the relationships you form or have formed.  I’m currently working on forming a BIBO (Bug In Bug Out) team and it’s been an interesting process so far.  The five or six friends who I’ve picked for the inner circle don’t know each other, so I’m going to have a meeting at my house so they can meet and have a chance to hang out for awhile.

I used different criteria for picking them, but basically first and foremost they are either preppers, or at least believe something bad is coming our way.  Luckily they have a good mixture of skills.  One has great mechanical and problem solving skills, another has excellent organizational skills, another is a hunter and outdoorsman, there’s two of us with military backgrounds and differing sets of skills and another who is a weapons expert.  I don’t have a medic yet, but I’m keeping my eyes open.

There are multiple reasons for having this team in place.

1.  It’s a good idea to get your thinking done and a team in place before the balloon goes up.  This way you’re at least organized and two steps ahead of anybody else out there.

2.  As a team we can decide what the main mission is.  At this point I see it like this:  if forced to bug-out we can meet at a predetermined location and provide security for each other as well as the synergy that a combined presence will give us.  Never underestimate the division of labor.

3.  If we decide to bug-in (most likely scenario) I see us as a loose coalition of families who can take care of each other if need be.  A couple of us live a fair distance away, but I’m not letting this stop me from inviting them into the group.  It might pay to have an asset away from where you are just in case, just as it might prove beneficial to them to have us there for them.

This is not an army or a fire team or anything like that, it’s a group of like minded individuals not afraid to protect their families by whatever means necessary.

It’s important to remember that during a crisis you can’t take the law into your own hands.  Why not?  Because eventually order gets restored and then the authorities will go looking for those who broke the law to punish them.  I don’t now about you, but I don’t want to survive a massive dollar collapse with relative ease only to wind up in prison later because I broke the law during the crisis.  Think before you act.  Protect yourself if necessary, but don’t go looking for trouble.  My experience is that those who look for trouble usually find it. 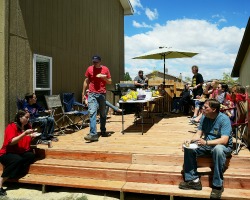 The guys in my group are my friends and I trust them.  That’s going to be important during a crisis because I want to know that if I have to leave my family behind they’ll be looked after by the others in the group, just as I’d be looking out for their family.  I may ask each of them if they have any friends that would make good team members if needed.  If I asked each of my friends on the team – let’s say five guys – if they have three friends that’s another 15 guys that we can now take into the fold if necessary.

Another reason to network is for family protection.  I alluded to this earlier, but all of us have wives, kids, parents, etc, that will need looking after if the situation goes south.  The wives will be able to help with many of the same duties as the men.  For example:  Mrs. Jarhead is a hell of a good hunter.  She’s probably bagged fifteen or more deer in her life and is not afraid to shoot something.  I’d hate to be the bad guy trying to get to one of our kids if she had the drop on him.  She’s a frightfully good shot and would likely drop him in such a way that he’d never even hear the bang.  The last thing he’d hear is a splat as the bullet hits him in the head… then he’d wake up in a much hotter place than he just departed.

Networking will help anybody out in this situation though, not just a bug-out team.  If you live in an apartment building you might not like the noisy neighbor that lives upstairs, but I’d be willing to bet he or she beats the drug dealer on the street or the rapist looking to get into your building.  If you network with a bunch of people in your building you can have a door guard and maybe someone on the roof looking out for potential threats.  You might have to haul water from the ground floor up ten stories.  If you set up a relay team to help divide the labor you might have one person bring 10 gallons up to the first floor, then the next person carries it up another flight of stairs and so forth.

Also Read: Bug In or To Bug Out?

In a suburban neighborhood you probably already know many of your neighbors and this would be a good time to set up a neighborhood watch.  I’ve been a part of these a couple of times and it’s interesting to see who will actually show up.  This is a great way to see who you will be able to consider trustworthy when it gets real.  There is strength in numbers and having a small community – or tribe – around you in a SHTF situation would not only make life easier with the division of labor, but it’s also a comfort to have others to talk, laugh, and hang out with.

Like most people I have a lot of people I am friendly with.  Acquaintances for the most part.  Then 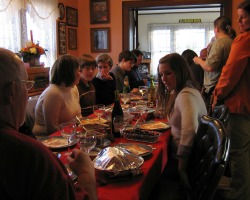 there is a small but much tighter group of people we hang out with.  They have similar core values, similar socioeconomic backgrounds, and are trustworthy.  These are the folks we can leave our kids with.  These are the people that when we all get together all the parents look after all the kids.

Let’s say we all meet at the campground for a day of fun.  If I go swimming probably three of the kids will go with me, my kids might go with another parent to the skate park, and the others might go to the playground with a couple of other moms and dads.  Each parent will look after the kids in their group as if they were their own and trust that their kids will be looked after and safe.  That kind of trust is not given freely by anybody.  It must be earned.  If you decide to start a group of your own you might want to talk to those within your own inner circle first.  Those you would trust with your kids, because ultimately you may find yourself in that situation in a TEOTWAWKI event.