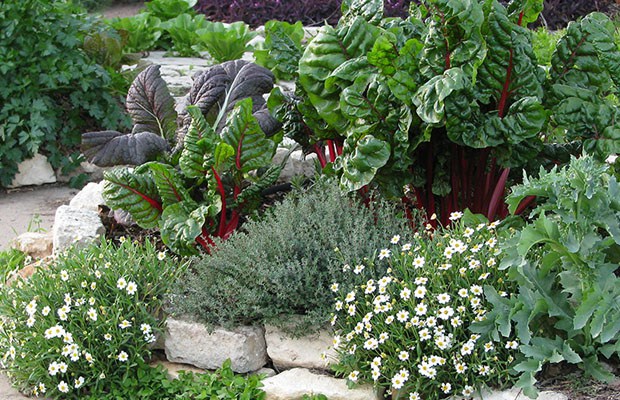 Editor’s Note: This post is another entry in the Prepper Writing Contest from Phillip Meeks. Phillip submitted another article titled, “Six Lessons From the Ultralight Backpacking Movement“. We routinely think of a garden as one of the best ways to provide food to our families. Usually, this brings to mind well formed rows of neatly arranged and grouped plantings as well as hours of weeding and cultivating that we can sometimes conveniently put off thinking we will do that later.

The edible landscapes concept takes the subject to another level and incorporates the food into every aspect of your yard. Instead of limiting food production to a rectangle of dirt, you can feed your family in other ways that require less maintenance and could remain hidden from view.

Americans like to spend money on their landscapes – a LOT of money. According to the National Gardening Association, the amount invested in lawns and landscapes in this country has ranged from $29 billion to almost $45 billion annually over the last few years.

Research has shown that there’s some practical value to well-planned and maintained landscaping, including an increase in appraised real estate value and a significant reduction in utility costs, but whenever I see someone spending their Saturday installing expensive rolls of turf grass or hundreds of impatiens, I’m tempted to ask the question my grandfather asked my grandmother about her houseplants: “Why would you grow something you can’t eat?”

I’m not anti-lawn (not totally anyway; the kids DO need a place to play football), but as a vegetable gardener and someone with an interest in preparedness, it troubles my spirit to see so much time, energy and cash going to pretty specimen plants and yard grasses and so little going to food crops for a particular household.

Imagine a food garden that you only have to plant once in your life-time, that takes up very little space, that will provide food for you and your family for the next 30 years

But is it possible to have the best of both worlds? And even if you already have a large vegetable garden and orchards, the diversity of edible landscapes can help fill in the gaps in your food security. For instance, think about what would happen if an insect or disease problem wiped out your apples or corn. Plus, plants worked into a landscape are more covert. The average person wouldn’t likely be able to identify a berry- or nut-producing shrub in a landscape bed unless they actually laid eyes on the berries or nuts.

Below are twelve plants to consider for your home environment that are both attractive and edible. Depending on where you’re located, some of these may not grow well in your particular USDA hardiness zone, so do your homework. Your local extension service can recommend other alternatives. Many of these can slip nicely into traditional landscapes, too, in case you have a homeowner association critiquing your every move.

Blueberries have appeal in all four seasons. The white blossoms of spring, the summer fruits, the red fall foliage and the bark texture visible in winter all make this plant a good fit for your landscape, and a healthy blueberry bush will bear for up to 50 years!

You’ll need cross-pollination, so select at least two different varieties that bloom at the same time. And as with all crops, know the pH of the site you’ve chosen before planting. Blueberries prefer an acidic pH of 4.5 to 5.3, so if it’s higher than this, you can adjust by adding a small amount of sulfur.

When I was a child, my grandmother always sang the praises of the “sarvis” tree, also know regionally as shadbush or Juneberry. The fruits look similar to a blueberry, although the two aren’t related. The serviceberry is a tree, not a shrub, and can reach heights in the landscape of up to 25 feet tall (and even taller in a natural environment). 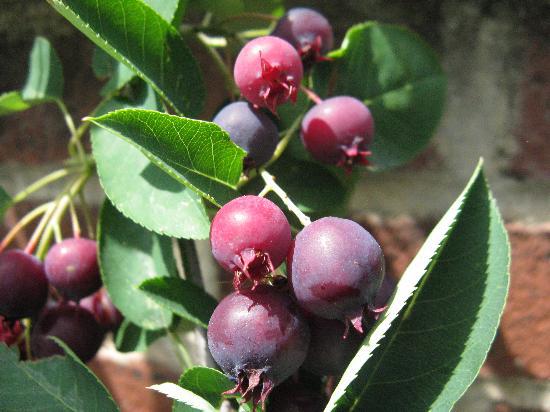 I had to attend a conference this past summer, and I discovered that serviceberry had been used quite effectively in the inn’s formal, manicured landscape, and it was bearing prolifically among the more conventional ornamental choices.

This Asian dogwood looks similar to the flowering dogwood native to the eastern U.S., but it’s more disease-resistant, it performs better in full sun, and it has edible fruits the size of a small plum. These can be eaten raw or used to make jams or jellies.

Not actually a cherry at all, but another species of dogwood, the fruits from this tree are tart and versatile. In the U.S., they’re typically used to make jam, but in parts of Europe or the Middle East where this species is native, the fruits might be used in the distillation of vodka or served as a salted summertime snack.

Nine species of passionflower are native to the U.S., and other species are commercially produced in tropical climates for juice, which can be found on the shelves of most larger supermarkets. Juice can be produced from most of our native species as well, but the maypop or purple passionflower (Passiflora incarnata) is considered the best. 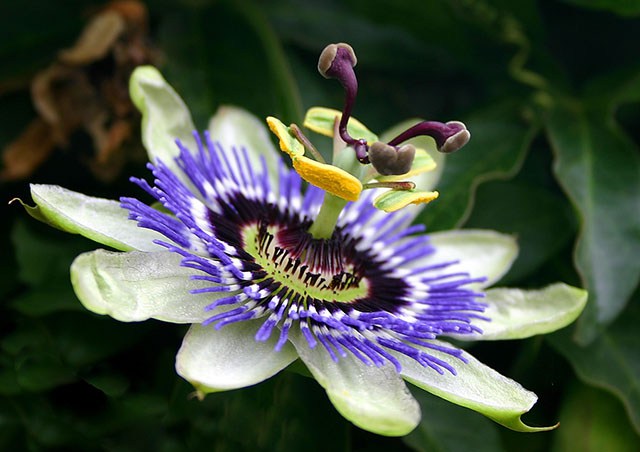 Where you may typically have ornamental vines like clematis running up a mailbox or trellis, consider passionflower instead.

Currants are related to gooseberries but have no thorns. Currants are one of the few fruits that perform well in partial shade, so if you have a corner of your yard that doesn’t get solid sunlight from morning until evening, consider these. 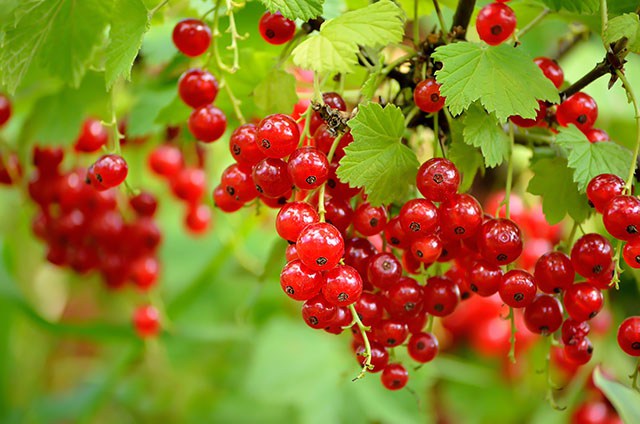 Currants come in a range of colors, from black to red to pink to white, but be mindful that some types could be illegal in your state. This is a carryover from the early 20th Century, when it was discovered that black currants were an alternate host for white pine blister rust, a disease which negatively impacted the timber industry.

With its large leaves and red stalks, rhubarb can fit nicely into an ornamental bed, serving as an effective groundcover. Once established, a rhubarb patch can be productive for more than 15 years, and it’s very winter hardy. 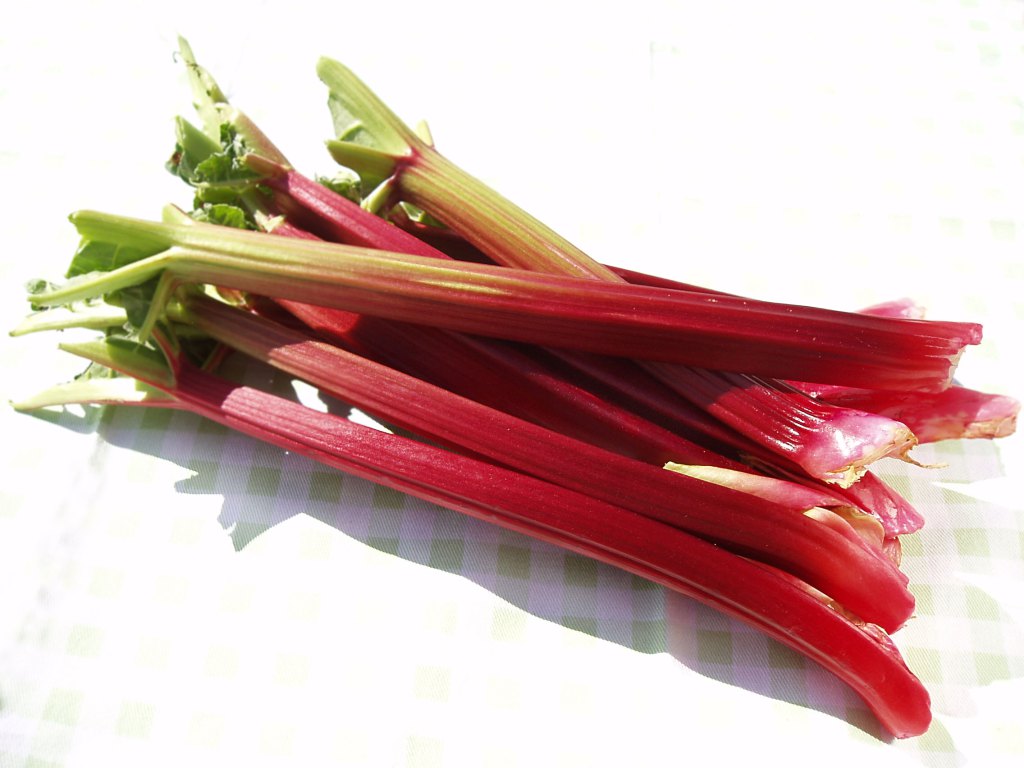 The stalks are an acquired taste, but many folks like to mix them with strawberries in pies and cobblers. In Asia, they’re used as a vegetable and added to stews. More unusual methods of using rhubarb would include dried and candied stalks, and some folks even like to eat them raw.

Native-to-the-U.S. sunchokes grow aggressively, and they’re difficult to eradicate once established, so never plant them where you might want to grow something else down the road. The tubers can be used like potatoes, and they’re often promoted as a potato substitute for diabetics, since their storage carbohydrate is inulin instead of starch. Inulin converts to fructose rather than glucose in the digestive system. 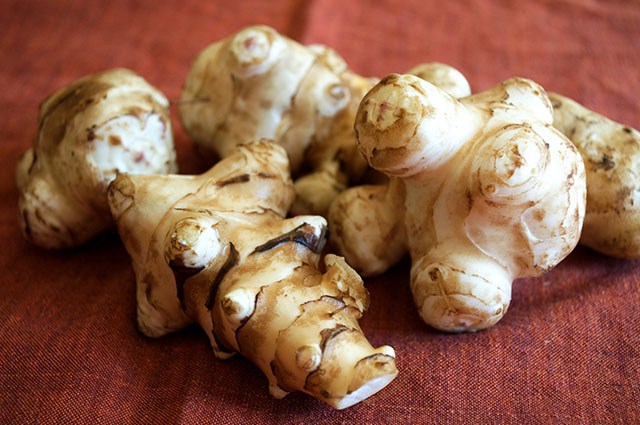 Sunchokes are also known as Jerusalem artichokes, but they’re no relation to the actual artichokes found in the supermarket. Since it’s technically a native sunflower, the mature plants will produce dozens of small, yellow flowers on four- to nine-foot plants.

Glancing through the catalog of a company that carries amaranth will give you an idea of the diversity of varieties. Amaranth can be grown as a grain, a forage, a leafy vegetable or as an ornamental. The colors and seed head shapes vary wildly. For flour production, amaranth is naturally gluten-free.

Be wary if saving seeds from amaranth, because they’ll cross-pollinate with weedy cousins like lamb’s quarters or pigweed.

There are two warnings that go along with a desire to establish bamboo in a landscape. The first is that bamboo can be extremely invasive. If planting the running varieties in particular – as opposed to clumping varieties – be sure to use a subterranean barrier, or else your neighbor’s hay field may soon become a bamboo forest.

The other warning concerns the use of bamboo shoots as a food source. While the shoots are popular and high quality, there exists a slight possibility of infection by the fungal pathogen ergot. Ergot affects other grass species such as rye, wheat and barley, too. Ingestion of ergot can cause hallucinations and death.

However, you can learn to identify the presence of ergot easily, and it’s more likely to occur in wet weather.

Once you’ve dealt with the invasiveness and the potential for ergot, bamboo can be an excellent plant for the homestead. In addition to the shoots, it can be a perpetual source of material for structures, furniture, fencing and trellising, and it’s an effective privacy screen.