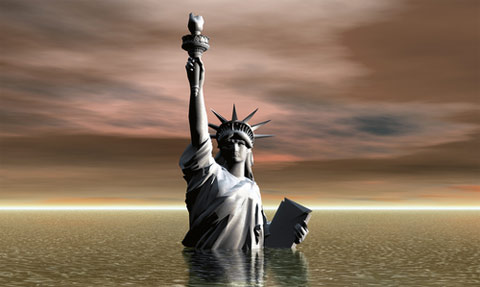 This article was originally published by Daniel Drew at Grams Gold.

Editor’s Note: As this article points out, the scheme announced by Obama to make community college free will not make America prosperous or fully employed. While have a well educated, skilled and knowledgeable populace is worthwhile, there is already a glut of over-educated degree holders – including many with master’s degrees and other specialized qualifications – who cannot find work in their field.

Why? Because the jobs just aren’t there. America doesn’t do much of anything anymore but consume. More and more skilled jobs are paying wages as low as fast food joints, and are so flooded with applications, that the job may as well not be there. There is too much demand by a workforce for work that isn’t there… so most have lowered their standards, and become adjusted to skating by with low wage, low skilled work when they have already over-achieved in the educational field. Student loans don’t get paid back this way, and the economy doesn’t bounce back either.

Unless the other side of this equation changes, there will be a continued downward slide, while millions more graduate with nothing to do, no where to go.

Fired Before Hired: How The Economy Has Killed The American Dream

The latest corporate scam is to blame workers for the high unemployment rate. They say there is a skills gap. Even President Obama is in on the joke.

In his most recent State of the Union address, Obama called for Congress to make community college free. Because nothing will get you a job more than an associate’s degree from your local college.

The real skills gap is the other way around: too many skills for the low-wage menial jobs that pervade the labor market. The person who makes your coffee or your Big Mac might be able to design the next major bridge or write for The New York Times. Instead of high school kids cooking up your lunch, true professionals are behind the counter, and the future of the country is behind it too.

If this doesn’t qualify the United States as a third world country, what will?

The longer they stay there, the odds increase that America will take a permanent backseat in global power. In one short century, we have gone from superpower to super size me, a plutocracy, a nation that wasted its most valuable resource: the energy and innovation of its own people.

As you send your resume for the latest job ad, do you ever feel like the labor market is rigged against you? The job boards have turned into such black holes that we need Stephen Hawking to come work out the equations for us. You send your resume in, and it disappears.p

In 2012, Eric Auld, an unemployed 26-year-old with a master’s degree in English, decided to find out what was on the other side of the black hole. He created a fake job ad as an experiment:

If you have ever applied for a job like that, I offer my condolences. You have better odds at the casino. Auld received 653 responses in 24 hours. 10% of the applicants had more than 10 years of experience, and 3% of them had master’s degrees. Presumably, one of them would get the job.

But what does that mean? It means that all the other experienced applicants and master’s degree holders would remain unemployed. That is about 64 experienced workers and about 19 workers with master’s degrees. The only way to get a job like this is if you are sleeping with the human resources manager. And this is for a job that pays $12 in Manhattan. If this doesn’t qualify the United States as a third world country, what will? 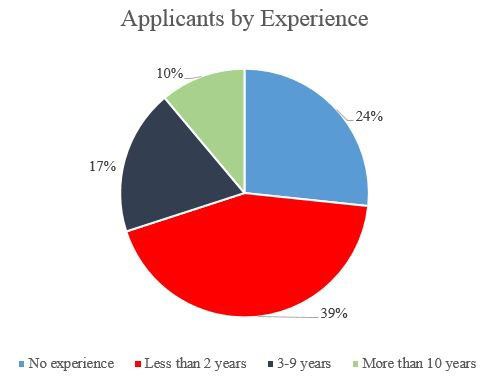 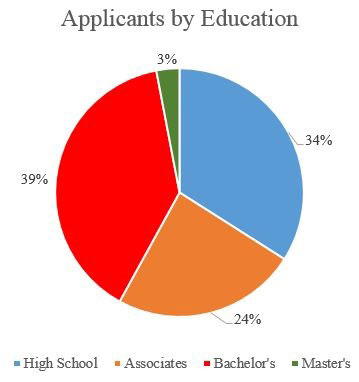 Peter Cappelli, author of Why Good People Can’t Get Jobs, received an email from an employee who said their company accepted 25,000 applications for a single engineering job, and the human resources team said no one was qualified. Cappelli said, “Not being able or willing to pay the market price for talent does not constitute a shortage.”

A New York Times reporter wanted to find out if the skills gap was real. He visited the engineering technology program at Queensborough Community College in New York City. There are no excuses here. This isn’t medieval literature or art history. This is engineering.

It is also a community college, which will soon become free if Obama has his way. In this particular tech program, the goal is to create manufacturing employees who can keep up in the era of automation. This is a textbook case for Obama, who said 80% of manufacturers have jobs they can’t fill. The National Association of Manufacturers estimates that there are 600,000 jobs waiting for anyone who has the right skills.

Well – what they really meant was the right skills and the desperation to work for McJob wages.

The New York Times reporter quickly discovered how much of a sham the skills gap really is. Eric Isbister, the CEO of GenMet, a metal-fabricating manufacturer near Milwaukee, said he would hire any skilled workers who showed up. He received over a thousand applications, but only 25 had the alleged proper skills.

Eventually, he fired 15 of them. Apparently, they were not happy at work. Perhaps it’s because he started them out at $10 per hour. If you had an associate’s degree, you could get $15. If you were lucky enough to still have a job after a few years, you might get $18 per hour – depending on performance. The local McDonald’s manager makes $14.

Mark Price, a labor economist at the Keystone Research Center, called their bluff, “If there’s a skill shortage, there has to be rises in wages. It’s basic economics.” But according to the Bureau of Labor Statistics, the number of skilled jobs has declined along with wages. There is no demand for skilled jobs. The true demand is for McJobs.

Think those manufacturing employees were unlucky to be doing high-skilled work at McJob rates? Think again. According to the Economic Policy Institute, for every two American college graduates with degrees in science, technology, engineering, or mathematics, only one of them is hired into a job in their field. In an analysis across every industry, they offer some important conclusions for us:

Stop making excuses for an economy that punishes workers.” Peter Cappelli said employers want to fill their positions without any training. The only way to get a job is if you already have that exact job somewhere else, and at that point, you probably wouldn’t want it anyway. In the 1990s tech boom, only about 10% of people in IT jobs in Silicon Valley actually had tech degrees.

According to Taleo, about two thirds of all jobs are filled by new applicants, rather than through internal promotions. A generation ago, 90% of jobs were filled with internal transfers and promotions. The employers demand loyalty, but they don’t provide any reason to be loyal to them.

The next time you see a McJob worker getting your donut, don’t be surprised if they graduated with honors. And if community college becomes free, then even more uber-educated Americans can make Big Macs. 30% of college graduates are consistently underemployed.

They can calculate the volume of your supersized drink, but they can’t make more than minimum wage while doing it because there is a “skills gap.” I think I know where the real gap is: According to Credit Suisse, if wealth were evenly distributed across every adult in America, each adult would have $301,140. 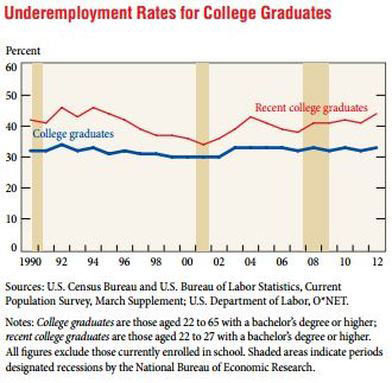