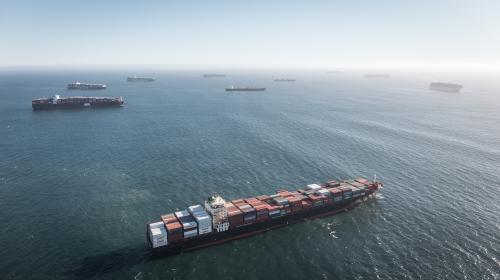 A massive shutdown of America’s supply chain is now in progress because of a labor dispute between dockworkers and their employers. The average dock worker, according to Zero Hedge, makes about $145,000 per year plus some $80,000 per year in benefits, but apparently their overtime pay is insufficient, which has led to widespread strikes at the nation’s busiest ports in Los Angeles and Long Beach.

The ports are now being partially shut down for at least the next four days, but the months-long dispute has already led to hundreds of container ships and tractor-trailers being left in limbo (see pictures below).

Though the strike has been off the radar for most, analysts suggest that the dispute is so severe that it could lead to widespread shortages of imported goods and mass layoffs in periphery industries, especially retail chains which will have limited amounts of goods to sell until a resolution is found.

The Retail Industry Leaders Association who, realizing that failure to reach an agreement between the dockworker union and their bosses, the Pacific Maritime Association representing port management would lead to devastating consequences for the US retail industry, had several very damning soundbites:

And the punchline: “The slowdown is already making life difficult, but a shutdown could derail the economy completely.“

The situation, according to the Retail Industry Leaders Association, is dire:

“A work slowdown during contract negotiations over the past seven months has already created logistic nightmares for American exporters, manufacturers and retailers dependent on an efficient supply chain. A complete shutdown would be catastrophic, with hundreds of thousands of jobs at risk if America’s supply chain grinds to a halt.”

The shutdown is a sight to behold. Hundreds of transport ships with thousands of containers of cargo are not being allowed into ports to unload their goods.

Cargoes from around the world are backed up as evidenced by the following aerial photos from Mike Kelley:

It was one of the most exciting experiences I’ve had doing aerial photography – being that far out at sea, with the huge swells underneath you, and these massive, massive container ships everywhere was like living a scene out of Walter Mitty’s life. The labor union and employers will eventually come to an agreement, perhaps with Presidential involvement, but a prolonged strike will, as noted above, have a disastrous impact on the economy.

It appears that this is what is happening now and the effects on a consumer-based economy could be devastating across the board.

We’ve often recommended to readers that they stock up on emergency supplies simply because sometimes unplanned events happen. The current port shutdown is a limited event, but given that even this could lead to serious economic problems and job losses, it’s not a stretch of the imagination to suggest that in a real emergency the shutdown of transportation systems on a national level would lead to a total breakdown and panic within days, perhaps even a few hours.

The reality is that 99% of Americans are not prepared for a sustained shutdown of transportation systems and supply lines. There would be no food or gas to be had. As The Prepper’s Blueprint author Tess Pennington highlights in Anatomy of a Breakdown, once peaceful streets and neighborhoods would quickly be besieged by looters looking for resources.

When the needs of the population cannot be met in an allotted time frame, a phenomena occurs and the mindset shifts in people. They begin to act without thinking and respond to changes in their environment in an emotionally-based manner, thus leading to chaos, instability and a breakdown in our social paradigm.

It is for these unforeseen circumstances that we urge Americans to prepare for the worst. The last thing you want to be doing is looking for food and other essential supplies after a supply shutdown has occurred.